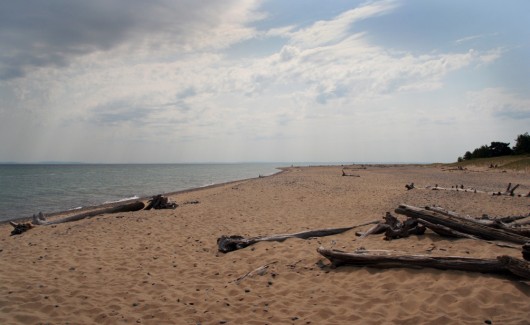 This is the beach at Whitefish Point in the eastern section of Michigan’s upper peninsula. The beach is very fine sand. The large numbers of beach stones are  all pounded into smooth shapes by the wild Lake Superior. They look as if they’d spent months in a rock polisher right down to the cycle with the finest grit. The deer flies, though, are not quite so tamed. So, this is the beach. Standing there in the surf, even on a hot sunny day, you know for sure that this is Michigan’s Shipwreck Coast. You can imagine a dark night, in a fierce storm, when dedicated surfmen headed out in wooden boats to try to rescue those in peril of shipwreck. Many of them lost their lives trying to save others.

The Whitefish Point LIght station is the oldest active lighthouse on Lake Superior. The light was built in 1861 on orders from President Lincoln. The original keepers quarters have been fully restored and are open for tours. 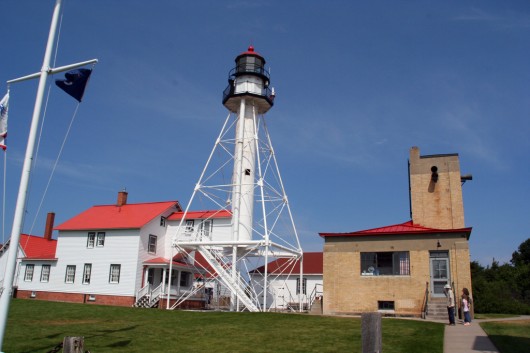 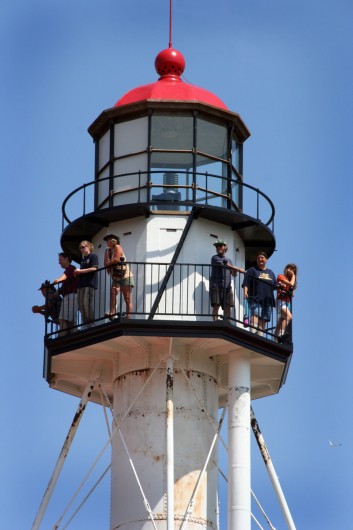 Lake Superior has earned its reputation as the most treacherous of the Great Lakes. Michiganders knew that even before the sinking of the Edmund Fitzgerald on November 10, 1975. All 29 crew members died. Gordon Lightfoot sung the new shipwreck story, but it was an old story, repeated many times before.

The Great Lakes Shipwreck Museum tells the shipwreck stories well. As you enter the small museum, you are reminded of the coast’s first explorers and of the early French voyageurs. 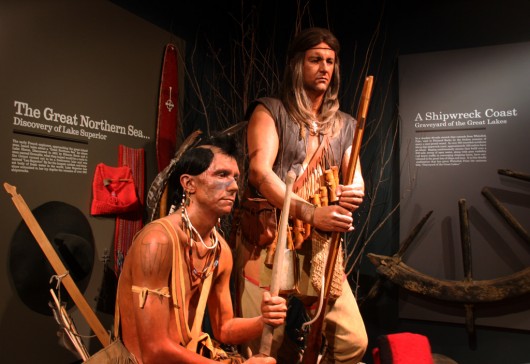 The scenes shift quickly to an assortment of modern day and almost-modern day shipwrecks. There are many recovered artifacts. There are scenes showing the exploration of the shipwrecks. But the centerpiece of the museum is the sinking of the Edmund Fitzgerald. 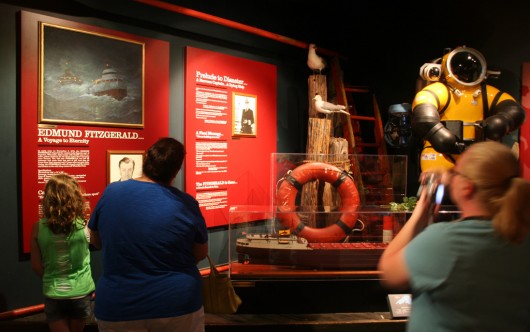 The museum’s small theater runs a short film on the sinking and on the 1995 joint effort of the Canadian Navy (the ship sunk in Canadian waters), the National Geographic Society, and the Great Lakes Shipwreck Museum’s Historical Society to recover the Edmund Fitzgerald’s bell to honor those who died in that year’s “gales of November.” The bell was raised. In its place, another bell was attached to the wreck. The new one bears the engraved names of the 29 crewmen who died and whose bodies were never recovered.

The original ship’s bell is on display at the museum. It is a memorial to the ship’s crew. But it is also a reminder that Lake Superior has been swallowing up shiploads of people for a long long time. The museum’s estimate is that more than 30,000 people have died in Lake Superior shipwrecks. 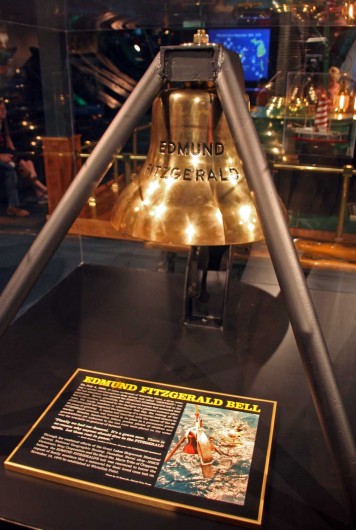 Listen to Lightfoot’s song. It’s a good one. This video includes footage from the newscasts of the day and haunting images from dives on the wreck. 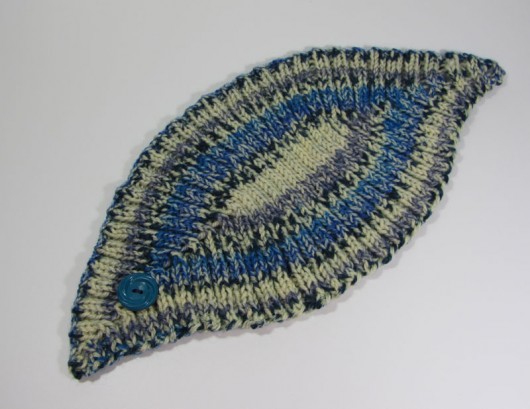 I’ve made a bushel and a peck of these. Well, not quite. But if you click on the thumbnail gallery at the end of this post you’ll see almost all of them. This one is knitted in Big Mexiko Color by Schoeller-Stahl. It’s a self-patterning wool worsted weight. I had my doubts about my choice of this yarn because of the short row shaping and how it might interact with the dye pattern. But I am quite pleased with the result. The vintage button works well too.

Calorimetry is a free pattern available at Knitty’s Winter, 2006 edition (also via a Ravelry link). It’s designed by Kathryn Schoendorf. So far, it’s been knitted and posted on the project pages of 14696 Ravelers. Quite remarkable popularity, Kathryn! 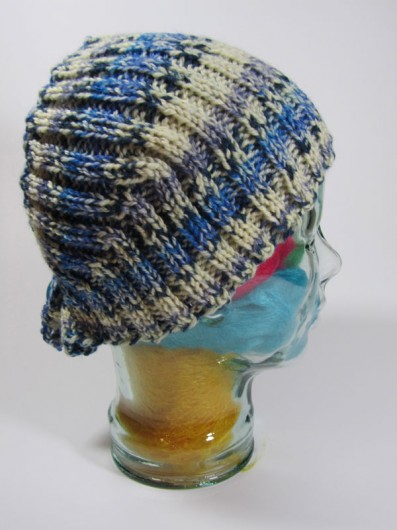 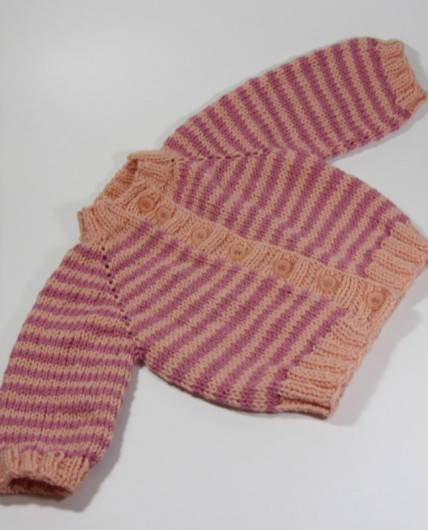 This sweet tiny thing is Elizabeth Smith’s “Little Coffee Bean Cardigan.” It’s a free pattern on her blog and is also available on Ravelry.  Don’t stress too much about the coffee and bean stuff. I think the name comes from the fact that Smith’s version is knitted in dark brown and cream stripes. Maybe I should call my version “Little Cotton Candy Cardigan.”

The pattern knits up very quickly in worsted weight. It’s sized for 3, 6 and 12 month babies. Mine is knitted in Plymouth Encore for very easy care. 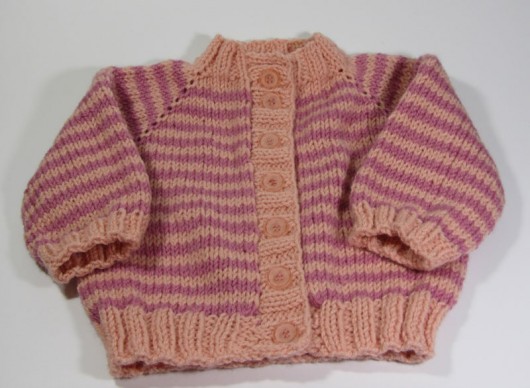 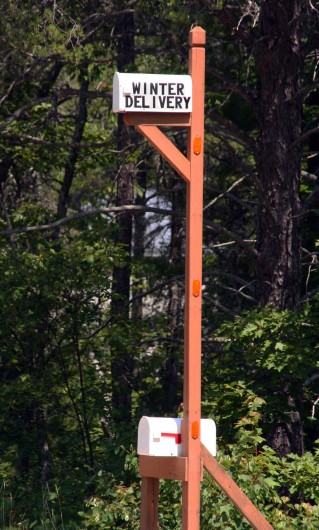 You’ll find these mailboxes on North Whitefish Point Road, between Paradise and (as you might expect) Whitefish Point. Between 1971 and 2000, the average annual snowfall in this part of Michigan’s eastern upper peninsula was 134.5 inches. That’s more than 11 feet of snow. In the 1976-1977 season, Whitefish Point probably didn’t dig out until somewhere around Memorial Day. That season 241 inches of snow fell (more than 20 feet).