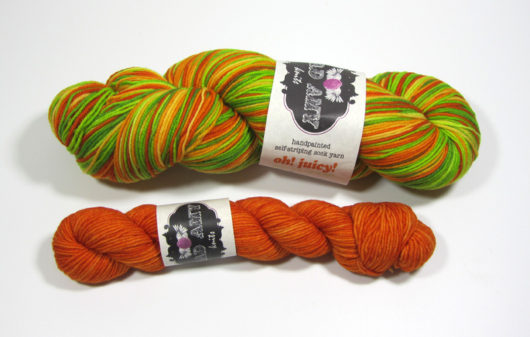 Black Sheep Knitters Guild had its annual “Brown Bag Swap” a few months ago. You probably already know how that goes. Bring a gift, pick a gift, steal somebody else’s gift, or pick a new one. I generally favor the strategy of picking a gift that isn’t nicely wrapped. After all, maybe you can tell a book by its lack of cover. It’s a fun diversion.

I’ve never knit with Bad Amy. This Indie dyer‘s yarns tend to sell out quickly. And she runs yarn clubs that have a lot of competition to get into. Someone-who-will-not-be-named put this self-striping skein of the “Oh Juicy” colorway into the swap. Oh Lordy! A gift can only be stolen twice and then it lands where it landed. Oh Juicy was chosen. But the giftee didn’t get to keep it. Steal #1. When my swap number was called soon after, it was Steal #2. And so Oh Juicy stayed with me. Lovely stuff. 80% merino, 20% nylon. Should hold up well. 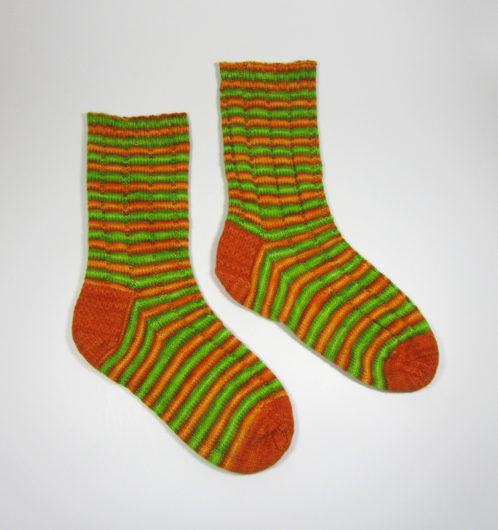 This is my Oh, Juicy knit up in Virginia Rose-Jeane’s great free pattern, Vanilla Latte Socks. It’s one of the most knit free sock patterns on Ravelry: 7685 projects posted. It is top-down knit, designed to be worked on magic-loop or two circulars. But it is very easily adaptable to double pointed needles. That’s my preference.

I knitted the largest size, on 72 stitches, using US size one needles. I chose the “eye of partridge” stitch for the heel and the rounded toe. 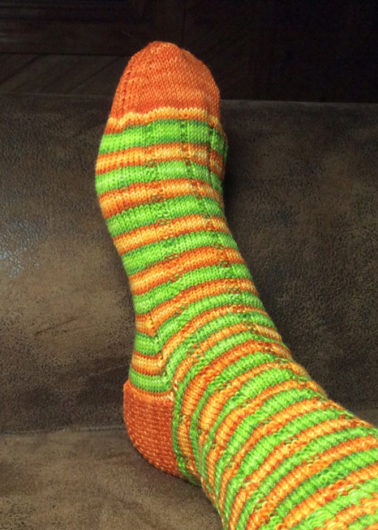 And, if the sock fits, wear it. These are mine, for sure.

The skein is generous. I needed only 14 grams of the 25-gram contrast yarn. And I had 20 grams left of the 100 gram skein of the main color.

There was enough yarn left for an Oh, Juicy bear.

This is my old stand-by bear pattern, from Lesley Ann Price’s “Kids Knits” book. You’ll have to search the library stacks to find that one. Thirteen of the eighteen Rav project pages on this bear are mine. And that’s not all I’ve made. In the last 20 years or so, I’ve probably knit a hundred of these guys! The bear is knit flat, in one piece (after you join the legs on the needles). Very little seaming. Piece ‘o cake. My Juicy has already been gifted to a little guy.