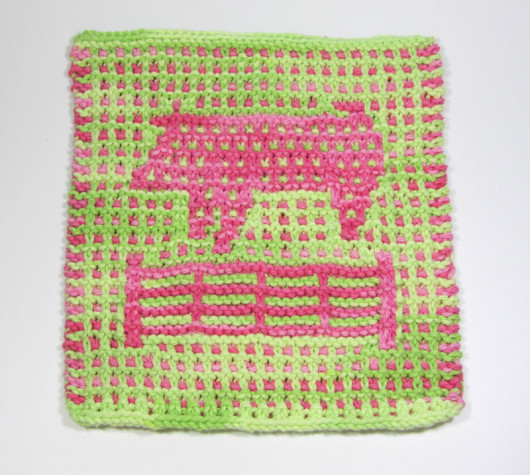 Amy Marie holds a bachelor of science degree in biochemistry and has researched gallium arsenide semiconductor devices. I had no idea what that is so I looked it up on Wikipedia. Gallium arsenide. It’s a compound of gallium and arsenide. Hmm. It’s often used as a substrate material for the epitaxial growth of other III-V semiconductors. Oh. Well. Enough of that. It must have something to do with seeing stuff that isn’t really there because that’s a bit like planning out mosaic stitch motifs.

Here’s me playing a bit and adding some sky to my piggy’s world. 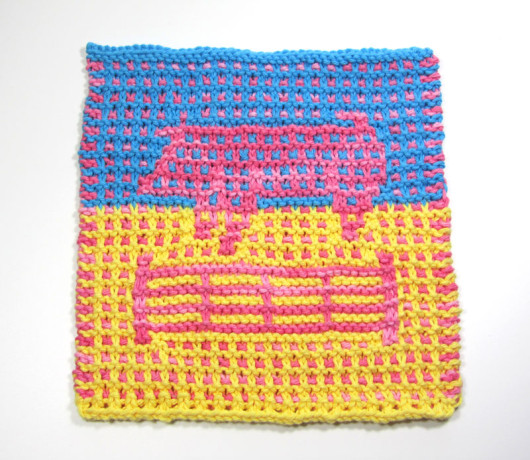 What a hoot! Is that a good transition? 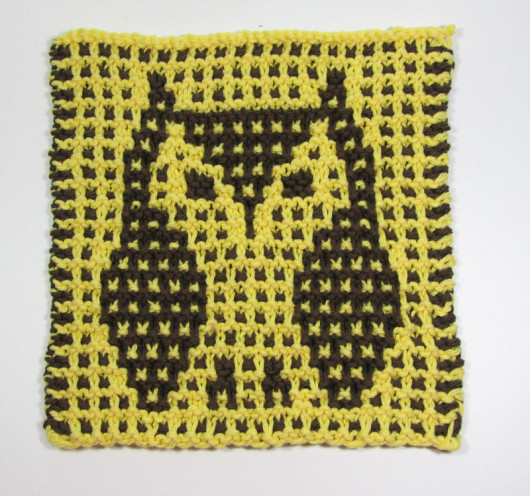 This is Amy Marie’s Who Owl Help Cook and Clean dishcloth pattern. I made one, in the same lowly Lily Sugar ‘n Cream that most knitters seem to use for dishcloths. Then, I quickly had to make another. It was that much fun! 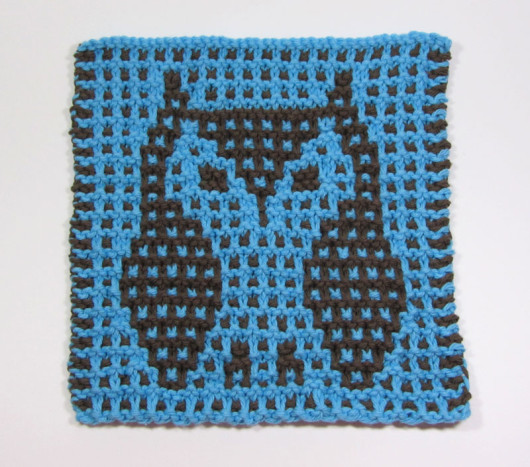 There is really only one thing to remember in garter stitch mosaic. On the public side, you just slip the stiches. Two things–it’s best to slip the stitches purl wise, to avoid twisting them. Oh, three things. On the non-public side, when you come to a stitch that you slipped on the public side, you need to move the yarn to the front of your work (as it faces you), so that your teeny strands between stitches will all collect on the non-public side. It’s totally easy. After the first few rows under your belt the knitting flows easily. It’s a lot of fun to see the pattern emerge.

Amy Marie makes it easy because every one of these patterns is completely error free. And the directions are both charted and line-by-line. So, knitters’ choice on which suits you best.

This next one, Lattice have Pie is a towel rather than a dishcloth. I will probably use mine as a hot pad. I gave this first one to a gifted hostess and it looked sweet among the yummy offerings on her brunch table. I decided to use a more refined cotton: Premier Yarn’s Isaac Mizrahi Craft Brookyn Solids. 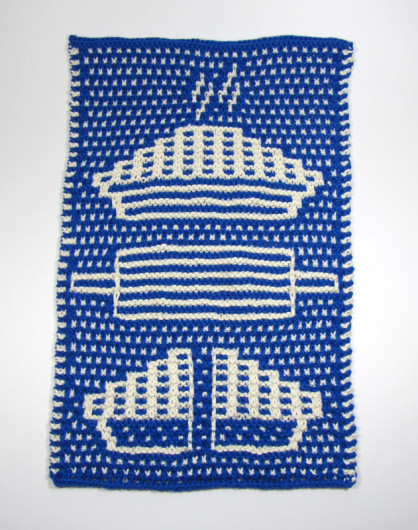 The pattern motifs can be knit in any order you like. Heck, once you’re on a roll, you could knit a table runner of these if you wanted to. My gauge was off because this yarn isn’t as beefy as Sugar ‘n Cream and my towel turned out to be 11 inches by 17 inches.

For the first time I tried the so-called “Chinese Waitress Cast-on.” I used it for my Lattice Have Pies and the piggy cloths. This cast-on seems to have first been featured in “211 Ways to Begin and End Your Knitting,” written by Cap Sease and released in 2014. The story goes that she learned it from a friend who learned it from a Chinese waitress in Beijing. You can see the cast-on more clearly in the version of Lattice Have Pie that I knit in Sugar ‘n Cream. 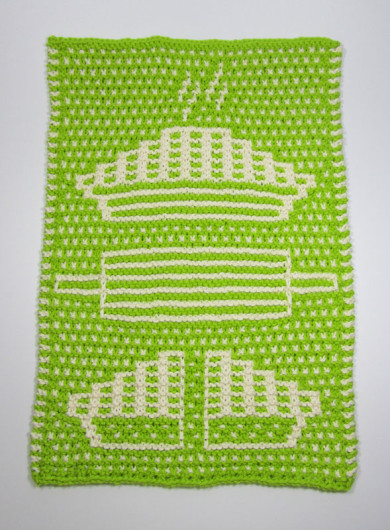 It is a short-tail cast-on that creates a knitted-on row with a uniform row of nicely behaved stitches. Compare the piggy cloth with the owl cloth (which I knitted with a long-tail cast-on) to see the difference. I’d like to find a Chinese Waitress Cast-off so that the beginning and end of the cloth would match more closely, but that’s so obsessive of me I can barely stand myself for mentioning it. It’s a cool cast-on to add to your repertoire.

Here’s another look at my full moon/no moon set of owls. 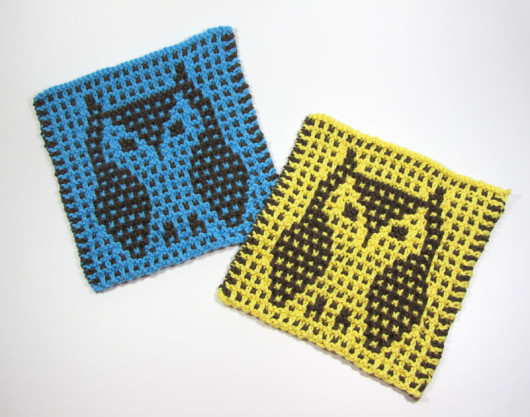