A special niece recently asked me to knit a Hobbes for her friend’s new son, Calvin. I was daunted by the prospect but she’s a knitworthy niece. Once I settled on what I judged the clear winner on the pattern design, Tall Tiger by a Scottish designer with the Ravelry screen name of Browneyedbabs, I was even more daunted. Barbara’s pattern is a Ravelry freebie and must have required a zillion hours to work out. I am very proud of this knit. 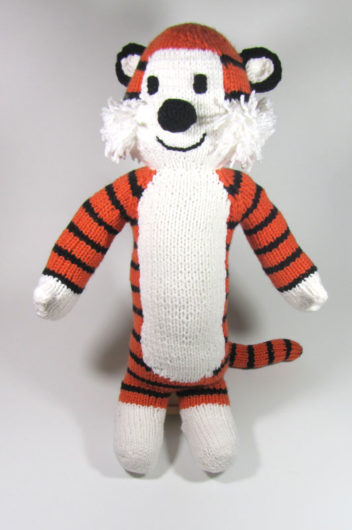 Why daunted? I hadn’t done a Turkish cast on in a month of Sundays. I managed intarsia in the round on Jacobus and Saar, Annita Wilschut’s great monkey pattern. But that was just for a mouth. Wilschut practically supplied movement by movement instructions to make that mouth easier. But Hobbes (excuse me copyright police, Tall Tiger) was clearly going to be much more difficult. He needed it for the entire length of his white belly and his face. Many a Raveller has given up and just knit white patches and sewed them on. And then there was the little matter of trying to work jogless stripes. I’ve never mastered that technique. But clearly Hobbes was going to look goofy if I didn’t keep his stripes from jogging at one of his underarms.

Hobbes and I think this knitter did an excellent job on those jogless stripes. 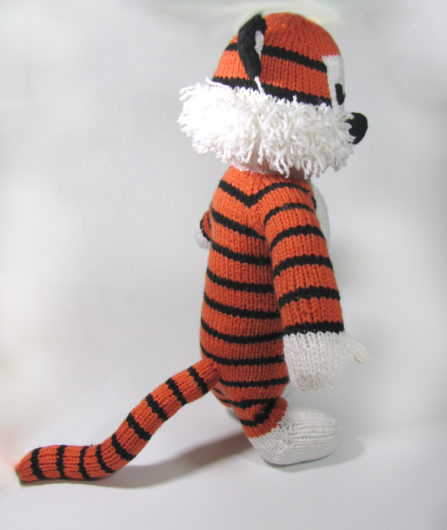 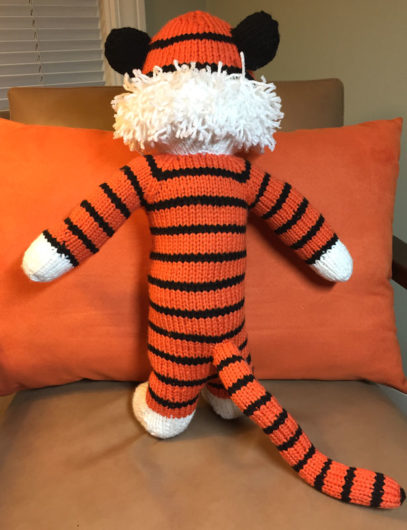 The Turkish cast on link in the pattern also provided excellent directions. I’ll leave the matter of intarsia in the round for later in this post. But, in the end, my hack came out looking good.

An extra hint on those stripes? When knitting the limb (and tail) stripes, carry the black yarn up on the inside without twisting it, to avoid black showing through on the public side. Just don’t pull tightly when you start a black round. I also stitched up openings from the inside, as I saw them forming, e.g. at the base of the thumbs, the crotch, and the underarms. 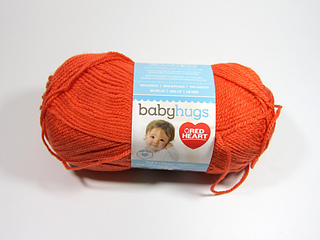 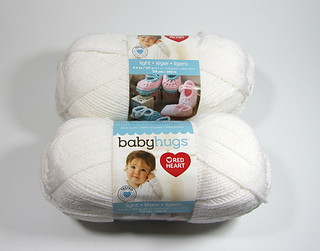 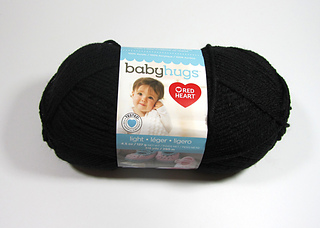 I was so unsure about whether I could knit this guy, that I purchased Red Heart Hugs Light, a fairly inexpensive DK weight acrylic for the project. I reasoned that acrylic would be easy care, which is good. And the colors looked just like what I needed.

I followed the pattern and held the yarn doubled throughout, on size 6 needles. Hobbes turned out to be 20 inches tall, so quite close to the designer’s plan for an 18″ Tall Tiger. Hugs Light isn’t scratchy, so that’s good. But I have to say that it has an odd bumpiness. And the bumpy quality wasn’t well-served by doubling the yarn. Plus, it squeaked at times. It wasn’t any kind of fun to work with. And I’ve never had yarn talk back to me before. I don’t plan on using it again. With that little rant out of the way, the colors are perfect. And Hobbes can be popped in the washer and then the dryer and survive intact.

Faces are often not where I excel. But Hobbes is lookin’ good. 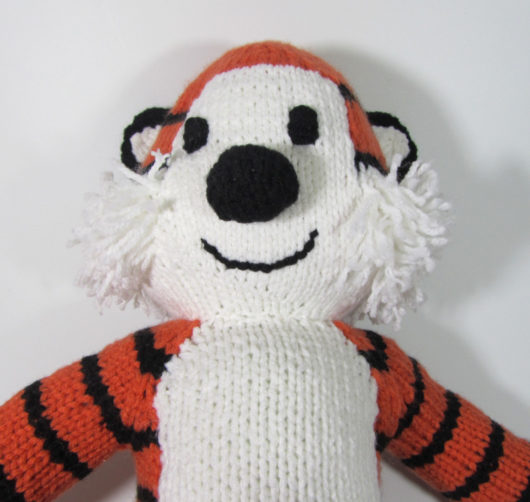 I decided I wanted the back of the ears to be stockinette so I doubled the stitches and knit them in the round. Otherwise I followed the pattern. Treating the ears that way also made it easier to sew the white inner ear onto the black.

For the mouth, I watched a few You Tube videos on the embroidery stem stitch. This is the best one I found, including because the stitcher works in yarn.

That’s loop stitch in the mane. With the loop tightly anchored, you cut it.

I found quite a few Calvin and Hobbes comic strips and laughed myself silly reading them. My trek through them was partly to see if Hobbes typically wore a bow tie. The pattern shows him with a bow tie. Since I didn’t see any of him with a bow tie, just a scarf occasionally, I left him without any clothes. The bow tie would serve well to hide a messy neck, but Calvin’s neck didn’t turn out messy.

Now, about intarsia in the round. 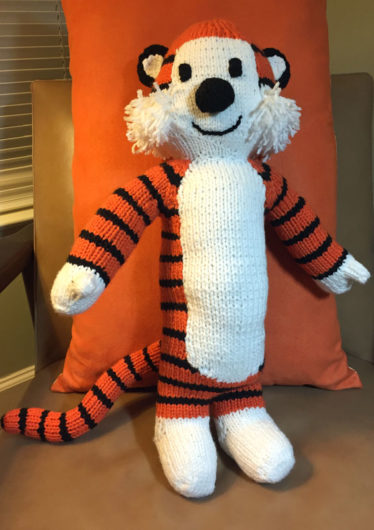 Despite buying the designer’s tutorial on working intarsia in the round, I simply didn’t understand her key instructions about pulling the “loop” of yarn and the photos in the tutorial didn’t help me. For other knitters, it’s been a different experience. Others report that it’s a fiddly maneuver but that it works well. First off, I am pretty sure whatever method you use for intarsia in the round, you have to cut the black yarn after each stripe in that belly section. With 5 rounds of orange it won’t work out that the black yarn ends up in the right spot when you need it. I think you could solve that problem by knitting 6 rounds of orange in between the black stripes, but that would yield a very tall tiger. And knitting 4 rounds of orange would work too but shrimp him up some.

One side of the intarsia join looks good without any work. But the other side, where the turn to purl is made…not so good. My hack, since I couldn’t master the technique that some others understood, was to anchor the turning side by attaching a long thread of white yarn at the base of that side of the tummy. At each turn to purl, or each continuation to knit on that side, I anchored the work by twisting the working yarn and the white yarn tail, tugging a bit to tighten the connection. I later (before stuffing) neatened up a few messy spots with mattress stitch, working from the public side. You probably have to be in the midst of this knit for that to make any sense. But if you give this knit a try and don’t understand what to do with the loop of yarn, maybe give my hack a try.

I needed far less yarn than the pattern called for, even doubling the yarn, and more orange than the other colors: 78 grams of white, 84 grams of orange, and 49 grams of black. 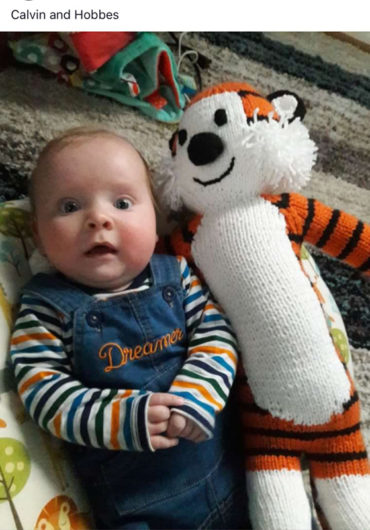 Isn’t that just the cat’s meow? Ahem, I guess the Tall Tiger’s meow? Dream on, Calvin!