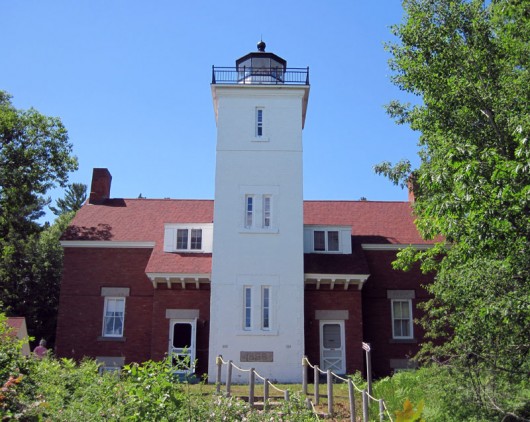 This is Forty Mile Point Lighthouse. It’s forty miles southeast of Old Mackinaw Point and forty miles northwest of Thunder Bay. So, an appropriately named lighthouse. It was completed in 1896 and has guided Lake Huron sailors since April of 1897. The tower is still an operational beacon. It’s lit by a 4th order fresnel lens set at three second intervals. The lens was built by Henry LePaute in 1872.

The lighthouse has recently been restored inside and out. Many of the rooms are furnished as if their original occupants had just run down to the water’s edge to check their fishing lines. Recently, the pilot house of the 1912 Steamer Calcite was relocated to the grounds.

When you visit, be sure to walk down to the beach. One hundred and fifty feet of the shipwrecked Steamer Joseph S. Fay is visible. It was loaded with iron ore when it broke up on a sandbar in 1905. The lighthouse keeper’s log for October 20, 1905 reads: “At 8:30 p.m. last night the steamer, J. S. Fay, came ashore here in a sinking condition. She soon broke up. Most of the crew came ashore on the pilot house. Three men swam ashore, the mate was drowned.” The entry for December 4, 1905 reads: “The assistant found a dead man on the beach about 1 mile up. We think it is the mate of the Fay.” Many sailors lost their lives in Lake Huron’s violent storms. Fall could be especially treacherous.

One great way to find your way to the lighthouse is to follow the bike path out from Rogers City. If you want to shorten the route a bit, park at Seagull Point. You’ll have a great view of Lake Huron and won’t miss a bit of the most scenic sections of the path. The path ends at the lighthouse. Or use these GPS settings to guide you to the entrance: N 45 29.024; W 083 59.892.

Read more about the lighthouse here. As you enter the grounds, tune your radio to 107.3 FM to hear a bit about the history of the site. 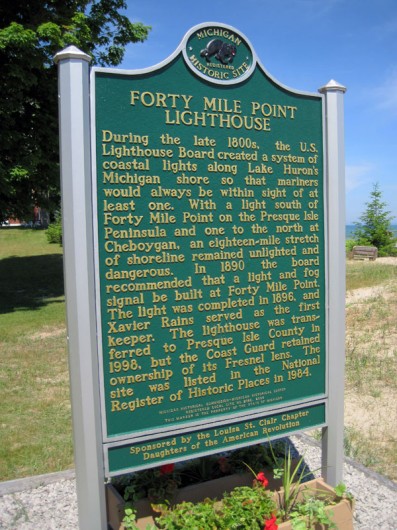