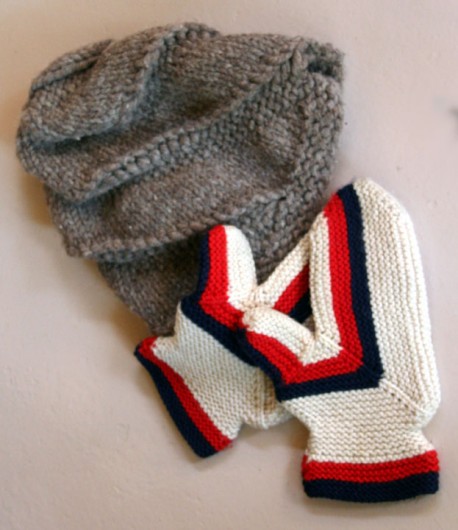 “EZ.”  Elizabeth Zimmermann to non-knitters.  She is widely accepted as the mother of modern knitting.  Some call her the Jerry Garcia of knitting.  When she died in 1999, her NY Times obituary said  that she “brought a penetrating intellect and a sculptor’s sensitivity to revolutionizing the  ancient art of knitting.”  It quoted from the preface of one of Zimmermann’s early books, “Knitters Almanac:”  “In knitting there are ancient possibilities.  The earth is enriched with the dust of millions of knitters who have held wool and needles since the beginning of sheep.”

Knitters will know that the hat is Zimmermann’s spiral hat.  It is the warmest hat there is–knitted of superbulky weight wool from her company, Schoolhouse Press, now run by Zimmermann’s daughter Meg Swanson.  (The acorn did not fall far from the tree.  Swanson is a master knitter, knit designer and teacher.)  And the mittens?  They are Sideways Mystery Mittens, knit in bold colors to show off the construction of the mitten. At a first knit, a knitter will be half way through the mitten before she sees how its shape is forming.  Zimmermann rediscovered the use of the moebius in knitting.  And ribwarmers.  And socks, oh my–could Elizabeth design socks.  Near the end of her life, we are told Elizabeth could not knit.  I am happy for her that she did not remember what she was missing.  Knitters around the world continue to find inspiration in  her ground-breaking body of work.  She encouraged knitters  to free themselves from the tyranny of the pattern and gently prodded us  “blind followers” to enrich our craft by finding its new and old expressions.

You know those ubiquitous plastic chairs that have popped up everywhere?  I am about to start knitting two chair covers for my beige pair.  I want to use Yuvinia Yuhadi’s “Not So Ubiquitous Knitted Chair” pattern, but I want to do it my own way.  I have stashed the yarn.  I have studied books and charts for inspiration.  I have read Yuhadi’s pattern. Blind following is easy. EZ’s call for bushwhacking your own knitting trail is harder.

“Knit on, with confidence and hope, through all crises.” Elizabeth Zimmerman