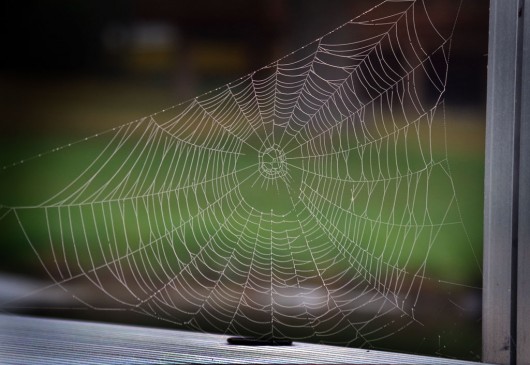 I stink at lace knitting. This little creature, well actually I spotted her and she isn’t all that little, knows how to do it. The two-leggeds among us, we obsess about every yarn over and agonize over our nupps. Spiders understand that lace is just supposed to happen.  You get your legs going, rhythmically tangling and untangling your silk and, pretty soon, in flies (or crawls) lunch.

The “bridge thread” across the top of this “sheet web” was about 18 inches long. The 22 radial lines steady the web in the breeze. That bit in the middle, the center point of the “capture spiral,” was intact. But the dew had already dried on it. According to Wikipedia, spiders don’t stick in their own webs (usually) because they can spin sticky silk and non-sticky silk and they somehow know the difference and don’t walk on the sticky parts.

Did you know that two  spiders, Anita and Arabella, travelled to Skylab 3 in 1973 to do their lace knitting in zero gravity? It took them a few days to adjust. When they were first released into their window-like cage, they made disorganized swimming movements. At first their webs were incomplete, but in a bit they were building webs just like back home, but of finer silk. They were fed water and a housefly, and eventually rare filet mignon, but they soon died–probably of dehydration. Their remains are preserved at the Smithsonian. As far as I know, nobody else has been lace knitting in space.

The fog was very heavy this mid September morning on the lake. The dew was too. It dewed up the spider’s web, which is suspended on a corner of our dock. The morning sun and Steve and his camera did the rest.