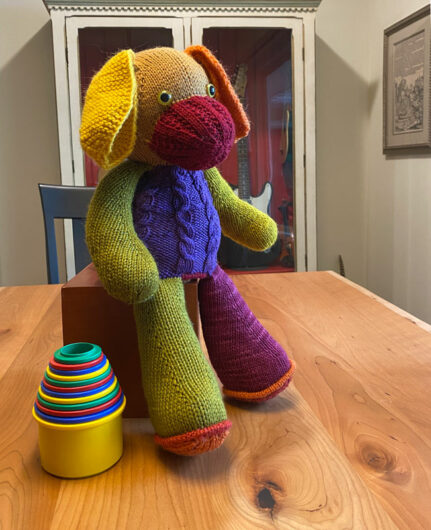 Only a little bit ago I was, well, little bits. Now I am Olivier as designed by Annita Wilschutt. She-who-will-not-be-named says I used to be Dream in Color Calm, Dream in Color Classy, Kelbourne Germantown, Classic Elite Tapestry, Classic Elite Legend, The Fibre Company Cumbria, Swans Island Nature Colors Worsted, and a few other amnesiac balls of something-or-other. Pre-Olivier, I was a bunch of leftover balls of yarn.

Being a bunch of leftovers taking up space in a too-full closet is not a happy situation in this house. She’s listened to Marie Kondo’s The Life-Changing Magic of Tidying Up audiobook. She’s even watched Kondo’s Netflix series. The leftover balls watched with interest while she folded her underwear in odd little packets and put them in new little fake bamboo plastic baskets. They muttered to themselves while she undid all those potato-sized balls of her store-bought socks. She tried to fold her T-Shirts into neat packages to stand them on their end. But her T-Shirts wouldn’t cooperate. That gave all the balls a good belly laugh. They stopped laughing after she listened to Margareta Magnusson read her book, The Gentle Art of Swedish Death-Cleaning. When she started culling knitting books from her shelf, the balls knew this was getting serious.

Oh, here’s the back of me. Everyone comments that they like my tail. 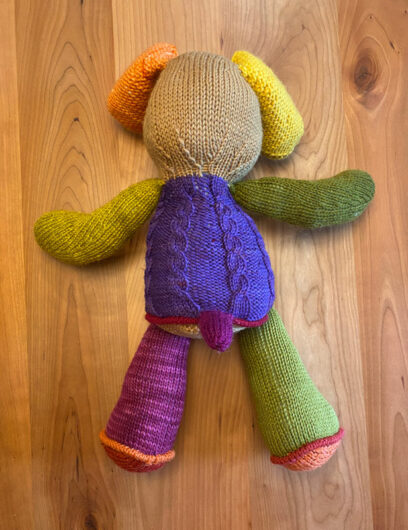 You can see that the oddballs’ fears were unfounded. She didn’t dump them in the wastebasket. She didn’t bundle them into a fresh ziplock bag and donate them. She didn’t even ask her knit buddies if somebody wanted some leftover balls. Instead, she spread out a 2-gallon size zip-lock bag of worsted leftovers and started sorting through them.

The balls found themselves rearranged because, at first, she was looking for the tons of Classic Elite Tapestry she must have thought she had. There were 3-4 balls left, but not near enough. What the balls understood, from her mutterings, was that she was trying to find all the same yarn so I wouldn’t turn out kind of lopsided. Something about trying to keep to the same gauge, I think. She settled for finding the same yarn for most of the paired body parts.

In the end, she seemed to settle on working out colors that she thought would look right together. I told her I was proud of her because it worked out well. She can use some encouraging because she feels that her color sense isn’t always on-target. One of my legs is a little fatter than the other. But that’s true of her legs too.

This is my ballerina pose. 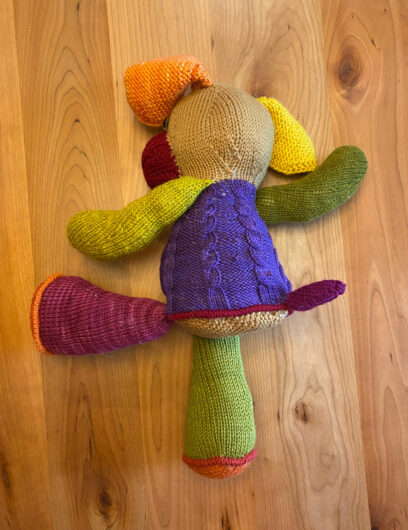 Here’s me trying to look up at her pleadingly. I probably knew then what always comes next when she writes these stories. 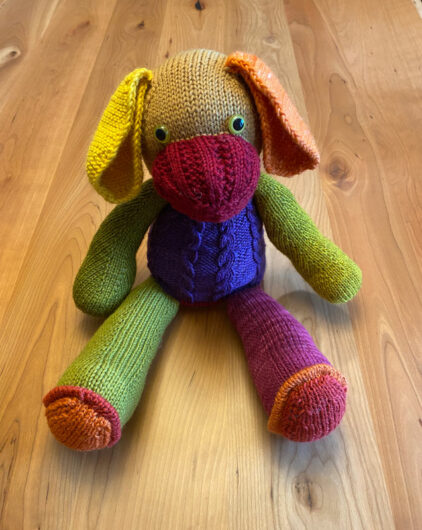 Every piece of me is knitted onto another piece of me. She didn’t have to sew me together. She just left a hole on the seam of my butt and stuffed me through that. It is a painful to remember this phase of me. 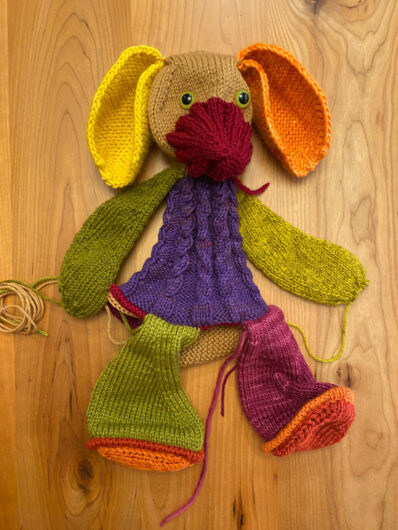 It, well, it sort of makes a body think. What was. What will be. What is. 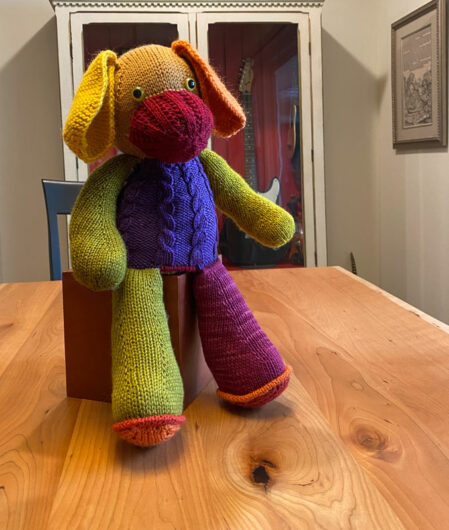 I’ve been sleeping in Isaac’s bed lately. This is-part? It’s the best!