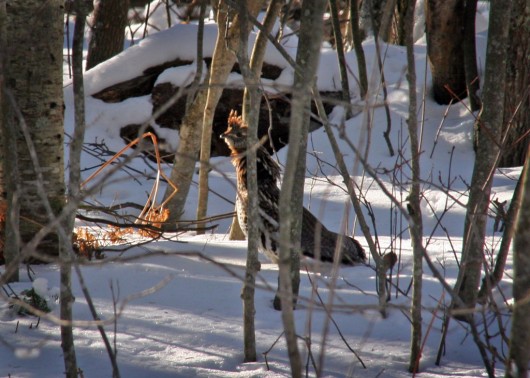 This is a ruffed grouse in the woods about two  miles northwest of Long Lake, off Sorenson Road. Its ruff, which both male and females have, is  a bunch of black feathers on the sides of the neck that the birds can fan out. The male birds can also fan their tail feathers like a turkey. This grouse is big–about the size of a chicken (16 to 19 inches long).

You can call this a ruffed grouse, or you could sound snooty and call this a bonasa umbellus.  Bonasum is “bison” in Latin. If you’ve heard the loud drumming sounds these guys make you might think you’re hearing the sound of bison hooves.That’s an exaggeration, but the drumming is loud. They drum by cupping their wings and using their strong breast muscles to move their wings very fast. They don’t beat on their chests. Instead, they move their wings so fast that they produce the booming sounds. The umbellus part of their species name comes from the Latin word meaning “parasol.” It seems that would be a tad like what their ruff or maybe their tail feathers look like when they are spread. Only the male birds do the drumming thing. They are looking for a female and also trying to keep the competition away.
.
All grouse have large feet with four toes. The front three are webbed, a bit. That webbing allows a ruffed grouse to walk on top of deep snow. Feathers cover their legs down to the toes. So, this is a bird with natural snowshoes and leggings.

If you are walking in the woods and a big bird suddenly flies up and you hear a loud wingbeat, it will very likely be a ruffed grouse. And in the winter, they may explode out of snow bank as you get near, because they burrow into the snow to keep warm. But this guy was just taking a stroll on a nice sunny day in Michigan’s “up north.”