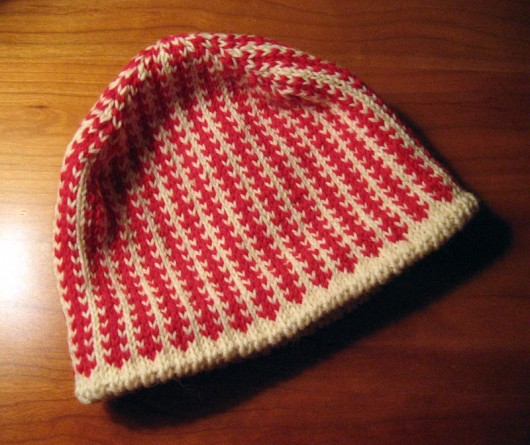 This pattern is spruce. So simple a fair isle pattern that you can work inattentively and still have it come out looking great. Three white, one red. Next round (basically), three red, one white (centering the three stitch midpoint of the same color from the round below). In other words, start out 3 white, one red through the first round.  On the next round, start with one red, one white, three red, one white, three red, one white.  And on and on. If you make a mistake it leaps out at you immediately.  You need a multiple of four stitches to make it work. Until you see this knitted up in green and white, it doesn’t quite hit you why this is called spruce. Tall spruce trees with neatly trimmed boughs appear, organized in rows just as if they were planted by the Depression-era Citizens Conservation Corps (CCC).

I learned this pattern from Robin Hansen’s “Fox & Geese & Fences: A Collection of Traditional Maine Mittens.” Robin’s two main books, the other being “Flying Geese and Partridge Feet,” have been repackaged in one volume called “Favorite Mittens.” My copy of F&G&H is copyright 1983 and well worn.

This aptly named “Spruce Cap” is contained in F&G&F, the first book in the series. I modified the pattern a tad to fold the ribbing under and create some extra warmth for ears. Hanson’s book includes a matching mitten pattern.

The only trick to this type of stranded knitting is you must establish a pattern for how the yarns will relate to one another and stick to it throughout.  Establish a rule like “red (yarn) over, white (yarn) under.” Or do it the other way. Just be consistent. One color moves slightly forward in the pattern and the other moves slightly back. If you twist the strands of yarn inconsistently, your spruce trees will seem out-of-focus and your knitting will look undisciplined.

The decreases at the top of the cap are wonderfully explained in Hanson’s pattern. Alternating which yarn is used for the decrease creates a neat tri-point descent to the cap’s top.

Oh yes, she has one of the best lines ever, making the familiar boring point to “Save time, check gauge.”  Hanson says: “The one time you don’t make a test gauge may be the one time the designer had a knit tight enough to repel pygmy blowgun darts, or loose enough to be used as gill nets for tuna.” 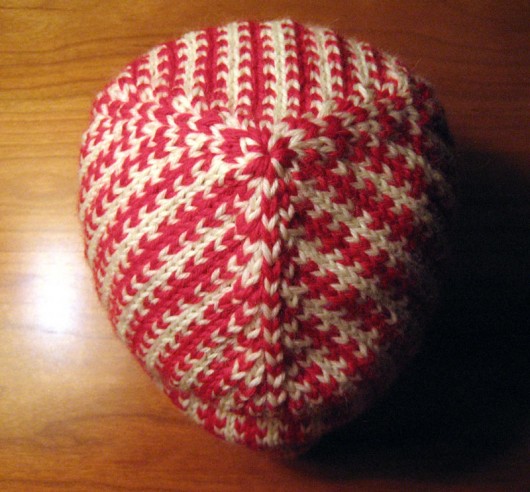