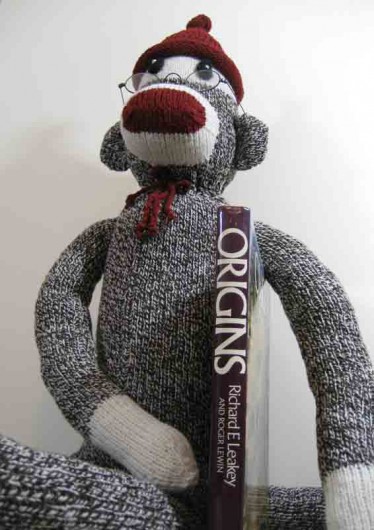 Yes, you can buy ragg wool socks, in these traditional colors, and sew up a sock monkey, if you are sew-inclined. And they are cute as a bug’s ear. But why spend $12 and a few hours of time, when you can pay a lot more for good wool, a pattern, Perendale loose batting stuffing from Frankenmuth Woolen Mill, knit for a zillion hours and STILL have to sew the sock monkey together?

This guy is big! He is knit in sportweight wool kitted up by Blackberry Ridge. He measures in at a 19 inch body with 15 inch legs and arms. His sturdy long tail creates a perfect tripod for the erect posture so essential to a primate. The pattern is Mr. Ben by Two Old Bags a/k/a Ann Swanson and Katie Nagorney. For reasons historical, this sock monkey is named Poodie.

From the moment Poodie was assembled on Christmas Eve, 2010, he proved a voracious reader. First it was Darwin’s Voyage of the Beagle. He was asking to read Darwin’s On The Origins of  Species next, but it’s not part of our library. He had to settle for Richard Leakey’s tome instead.