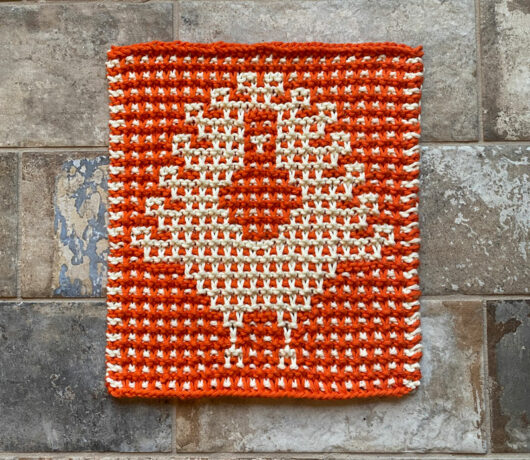 It’s been a rough 2020. I am so thankful for knitting and for the yarnie universe. Stay well. Knit on!

This is Pardon a Turkey, a new mosaic dishcloth pattern by Amy Marie Vold. It was such a fun knit. I love the alert expression on the turkey’s face! 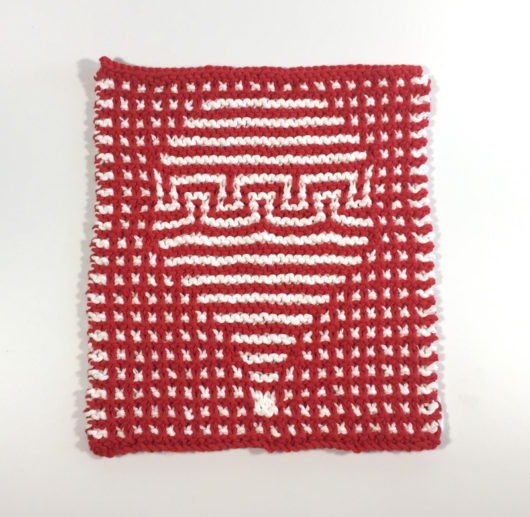 So. I was working on a rather major project. It wasn’t totally holding my attention. I was wooed away from it by Amy Marie Vold’s newest dishcloth pattern: Balloon Rides.  The pattern includes the balloon and six center motifs to decorate the balloon. My red and white set is knit in Sugar ‘n Cream, the workhorse of dishcloth yarn. First, my white balloon. And now my red one. 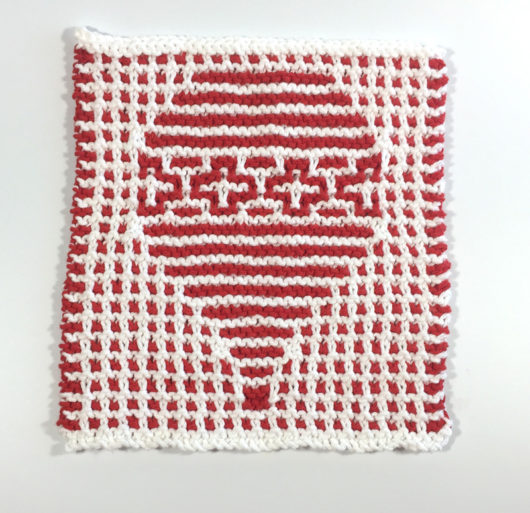 For me, these are top drawer, the cat’s meow, the creme de la creme of dishcloths. Great fun to knit. And they are cheerful and useful. 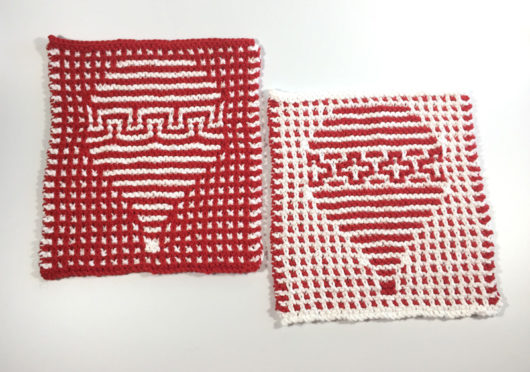 I knit two and then immediately decided to knit another pair, this time in Knitpicks’ Dishie. And this time in two different motifs. 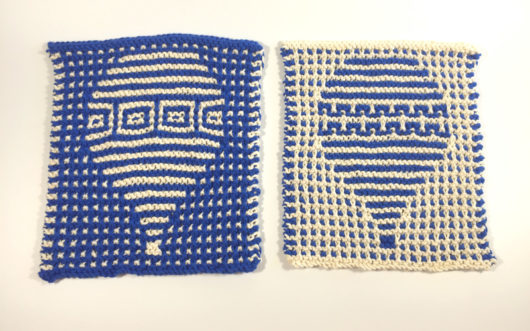 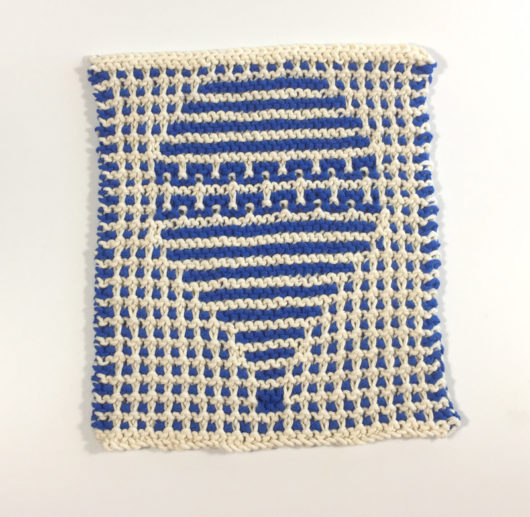 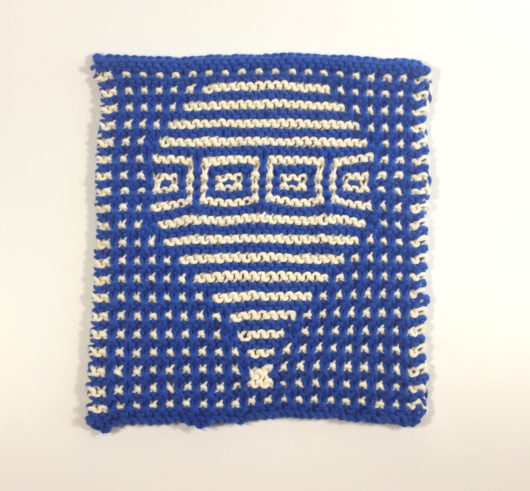 Some knitting is downright addictive. Vold’s mosaic cloths are that for me. She comes out with a new design and I “run, don’t walk” to Ravelry to download the pattern. I know that all the worsted weight ones work for me on size six needles (US). No need for gauge swatches. I just choose two contrasting colorways and set to knitting.

This next cloth is another of Vold’s newer ones: tOwl. I also knit this pair in Dishie. 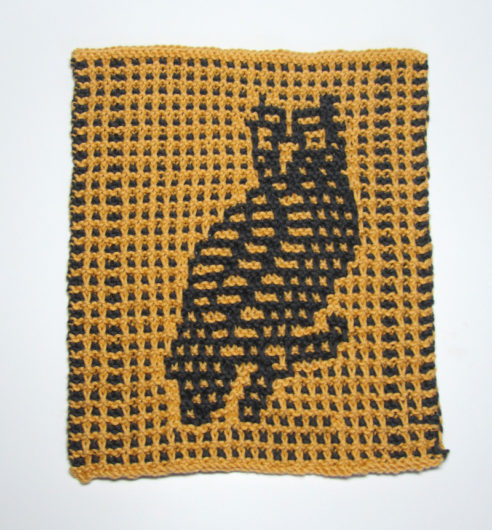 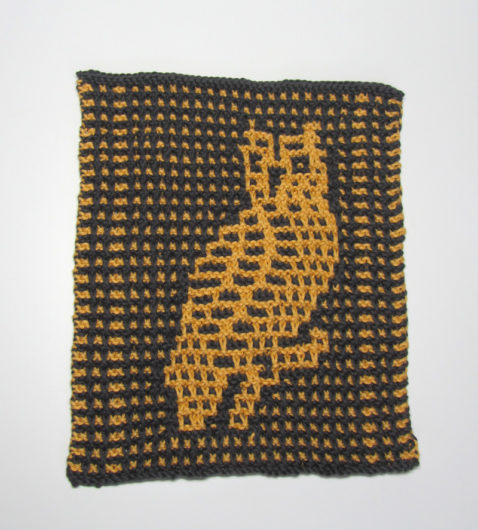 I’ve never seen an owl in the wild. Hopefully that day will come and that will be a thrill. For now, I can knit their likeness. 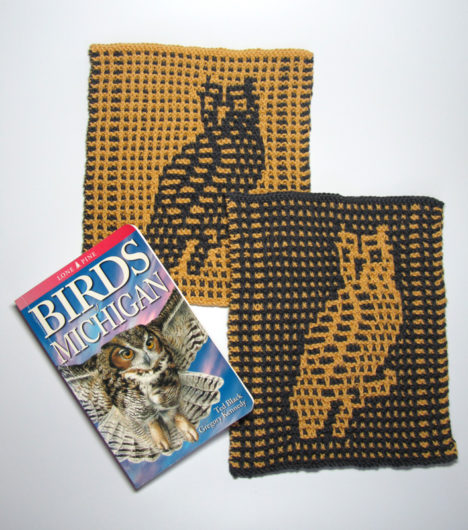 Once I took my 4 balloon rides, I was ready to tackle that big project again: a wedding present throw. More on that, soon. 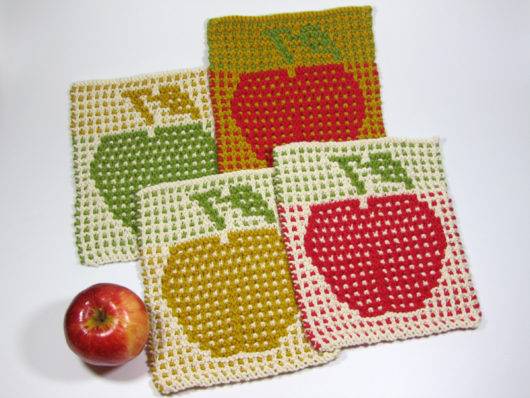 These are Amy Marie Vold’s a/k/a Ravelry’s CornucopiAmy’s Fresh Knit Apple dishcloths. I knit mine in DROPS Paris. Most of my cloths are gifted to friends and family. These made me want to keep a few for myself.

First up is a nice red Delicious Apple. 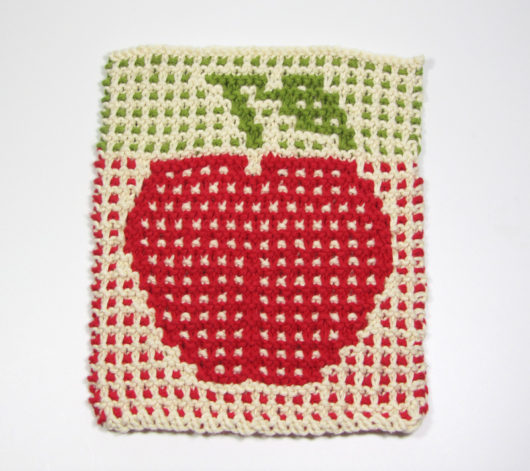 This one’s a Golden Delicious, I think. 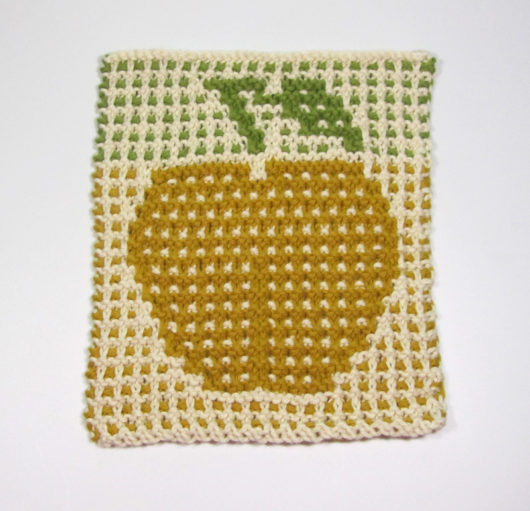 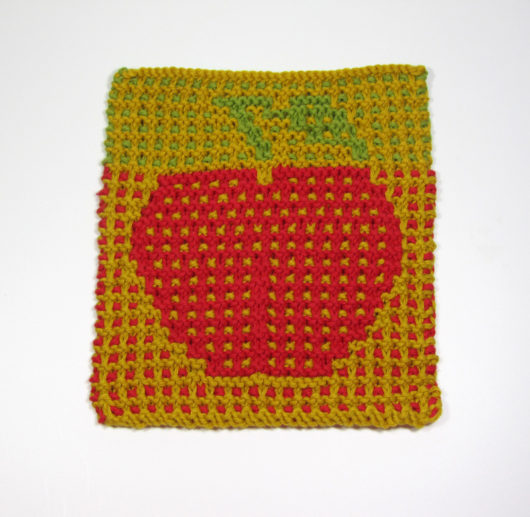 And, here’s a Granny Smith. 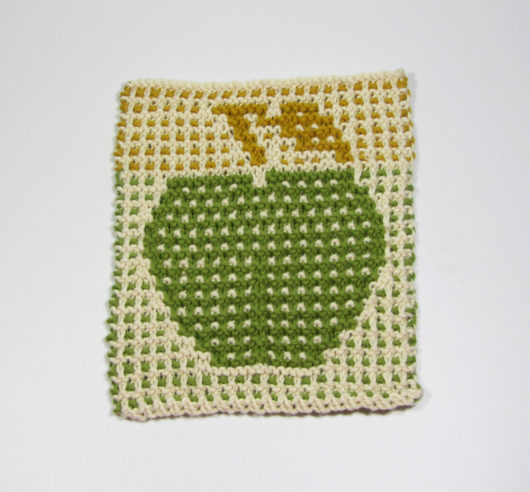 These easy slip-stitch cloths are tons of fun to knit. If you’ve not tried this technique before, Vold’s instructions are clear and there are many videos on the web that teach the technique as well. It’s also known as mosaic knitting. Better yet? Have a friend show you, once, and that’s all you’ll need to be off to knit your own.

If not apples, how about a Cloverleaf Cloth? 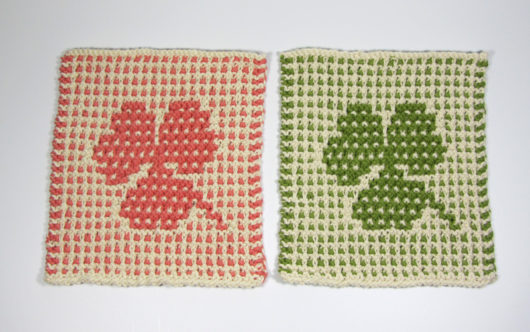 No? Then move to the animal kingdom for “Some Bunny to Do the Dishes.” 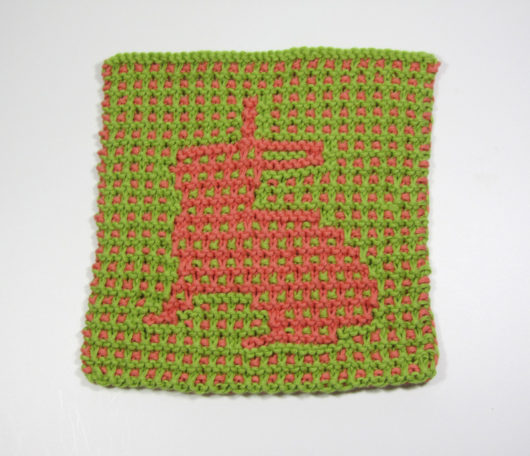 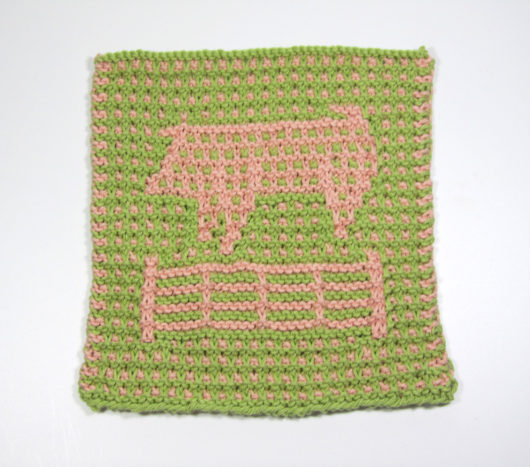 My Piggy is sort of hiding in the spring grass. But you’ll make a better color choice and your piggy will pop.

Looking for an edgier cloth? “Along Came a Spider” could be just the ticket. 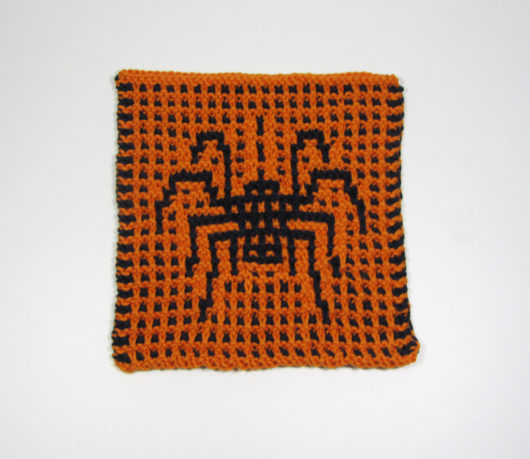 I think this next one is a Brown Recluse. 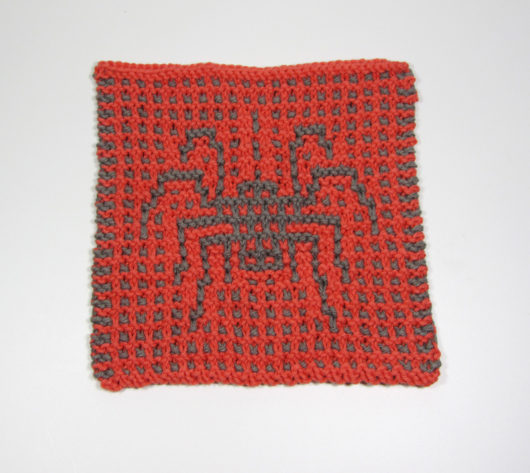 From edgy to a bit cartoony. The next set is “Window Patrol Cat Coasters.” I’ve got a “Go Blue” Michigan Wolverine colorway going, because that’s all the DK weight I had in my stash at the time and I live in Michigan so it’s forgiven. These cats are definitely eyeing that little yellow birdie. 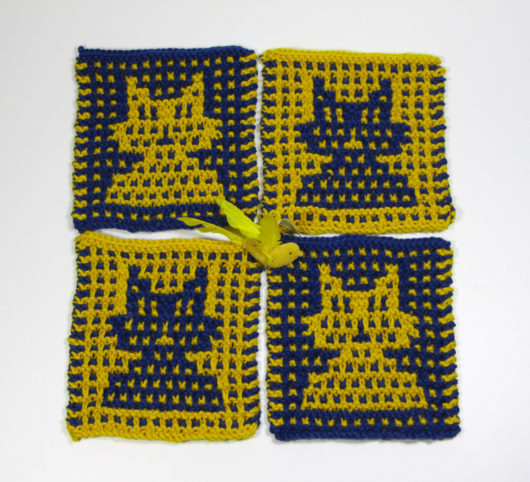 There are a lot of major and splashy talents in the knitting universe. In the smaller knitting world of dishcloths, Vold stands out. 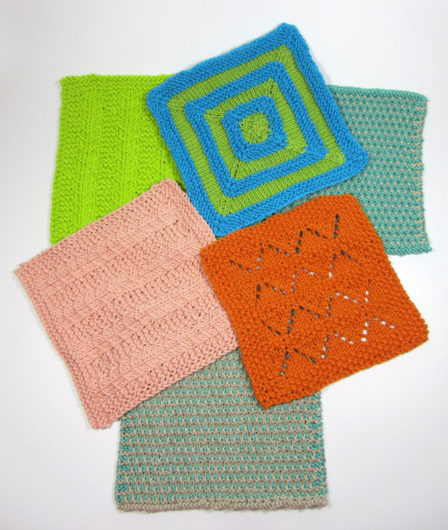 I know. I know. Pretty soon I’ll have to change the name of this blog to longlakedishcloths.com. I couldn’t resist Aimee Alexander’s Ravelry invitation to test knit her collection of cloths: “Salt.” “Salt” is an ebook of 4 cloths, 3 worsted weight and one DK weight. But I wanted to see a few in different yarns so I ended up knitting some of the patterns more than once. 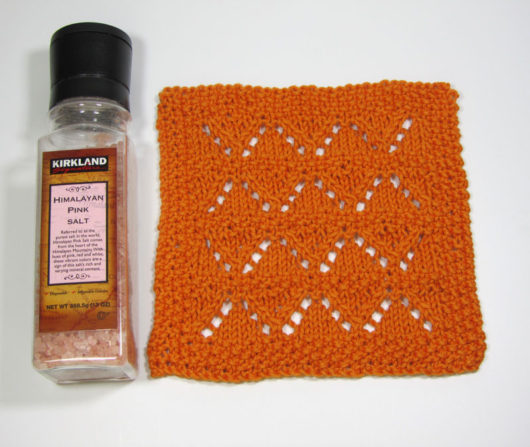 Such a nice easy lace. And it knits up quicker than two shakes of a lamb’s tail which is the equivalent of about two shakes of a salt shaker. Well, not that fast. But if a knitter can’t complete this in two hours, she’s taken a little nap between casting on and casting off.

This next one is Sea Salt. The green one is Lily’s Sugar ‘n Cream and the pink one is Knit Picks Dishie. 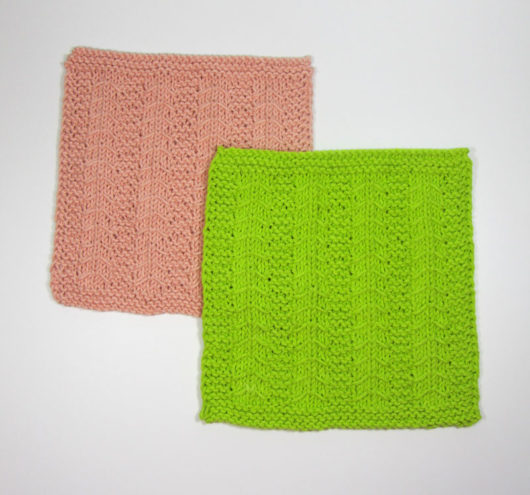 I’ve never done this tucked stitch before. Alexander’s instructions are spot on. The only thing that seems to confound people is they aren’t sure whether they should photograph their cloths so that the stitch looks like “v’s” or like arrows pointing upward. Not that it matters, but it develops like arrows on your needles, so I figure that’s the way to go.

Here’s another look at Sea Salt, so you can get a closer look at the tucked stitch. 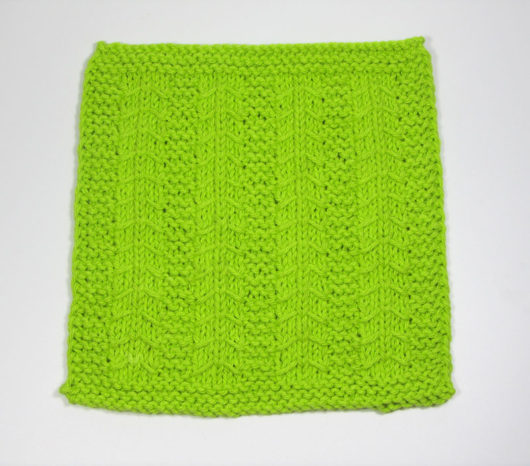 Alexander has worked up a series of other patterns in this same stitch. It’s fun to do. 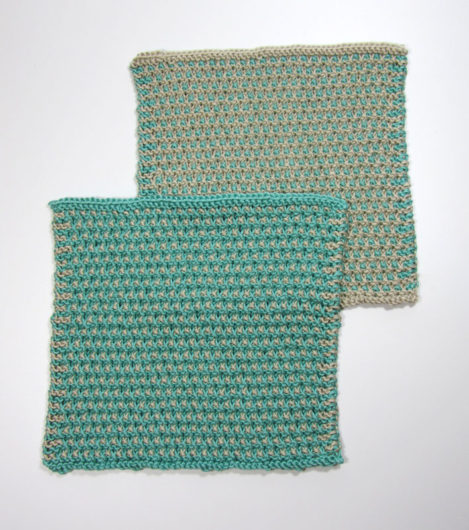 This is the easiest of the bunch, as I see it. It’s a slipped stitch (mosaic) pattern, worked up in a DK weight. What was fun to see, and quite unexpected–at least to me–was how different the two cloths are when you simply swap Color A and Color B. These cloths are both knit in the same two shades of DROPS Muskat. These two skeedattled out of my house almost as quickly as they popped off my needles. When it comes to dishcloths, it’s ask and ye shall receive.