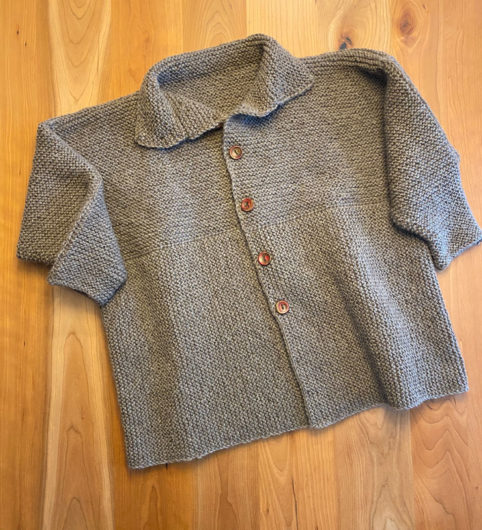 I know. It’s nearly 90 degrees and I’m posting super warm stuff. I’ve never been able to time my knitting to the seasons. I knit the warm stuff year round. I completed my Einstein Coat, designed by Sally Melville, a few months back. I’ve been planning on knitting this simple beauty for many years. It took a jumpstart from my Canada Creek Ranch knitting group to encourage me to cast on. A number of our knitters worked on Einstein over the winter and spring. The pattern is available in Melville’s classic book “The Knitting Experience, Book I, the Knit Stitch.”

I knit mine in Cascade Yarn’s Ecological Wool. My reason for this choice was pure ease of knitting. Bulky weight yarn is almost always put up in very short yardage skeins. I do not like dealing with a zillion joins, particularly not when knitting miles of garter stitch where there’s basically no place to hide what often ends up (for me) to be a slightly discernible join. Ecological Wool is put up in huge 478 yard/250 gram skeins. That made the knitting so much easier. Well, except when it didn’t. As in, I tried every trick in the book to get gauge and failed. But having invested in the yarn, there was no way I wasn’t going to use it.

Here’s another view–thought I’m doubtful I’ll ever be buttoning that top button. 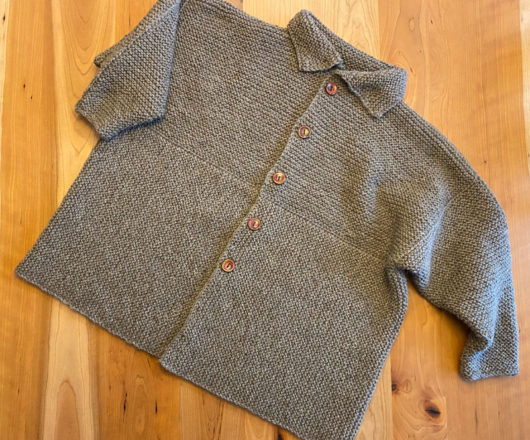 My swatches were undergauge even on size 11 US, where the fabric just didn’t feel beefy enough. I knit this on 10.5 US needles and knit the largest size–exactly as the pattern calls for it to be knit. It ended up smaller than the largest size, both in length and circumference but it (basically) still fits. It coulda shoulda been otherwise. But I lucked out.

I had trouble following the directions in the Melville book for seaming garter stitch with a slip stitch edge. Her photos weren’t doing it for me. And I just couldn’t–for the longest time—figure out her references to the “outside edge.” I eventually figured out that means the outermost edge of each of the fabrics being joined. In other words, it means you work what is really mattress stitch on the inner sides of the slipped stitches. Duh!

There are no slip stitch edges on the shoulders and I didn’t like the way my mattress stitch was working out. So I picked up stitches along the edge of both the front section and the back section–on 2 separate needles. To work the shoulder section of the seam, I worked a 3-needle bind-off, from the public side so the garter stitch-like ridge would form on the public side.

I heard that everyone is supposed to look nice or sort of OK in this coat, even rolly pollies. Hmm. ‘Nuf said. It would likely be more at home in a yurt on the Russian Steppes. But it is super cozy. And now I can join the rest of the knitting universe who’s knit this Einstein Coat as their garter stitch right of passage. I very much enjoyed the knit. 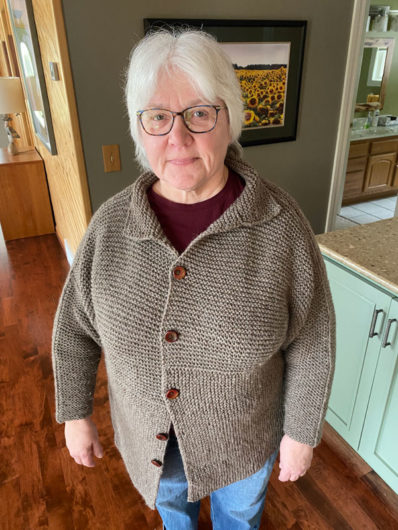 In my last post I whined about patterns that specify the yarn requirements only in terms of the number of skeins of a particular yarn. You may recall that my Kelbourne Wool Germantown was the gift that kept on giving for that reason. This time, it was my undergauge knitting that ended up leaving me with gobs of extra yarn. Also, from the outset, I knew I’d not be needing much of the yardage from the final humongous skein.

This bulky weight hat knits up super quickly. It’s Helen Rose’s freebie Cozy Ribbed Hat. All it took me to complete it was 85 yards of yarn, size 10 needles, and an hour or two of time. 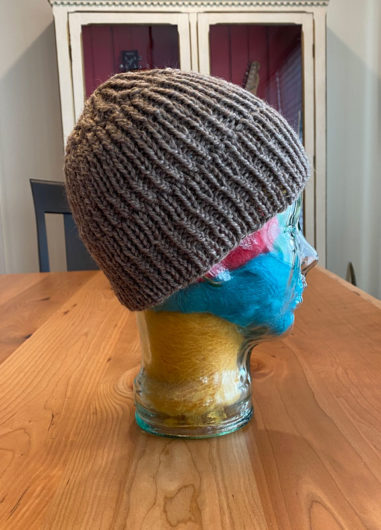 I find the top interesting and rather organic, if a tad messy. 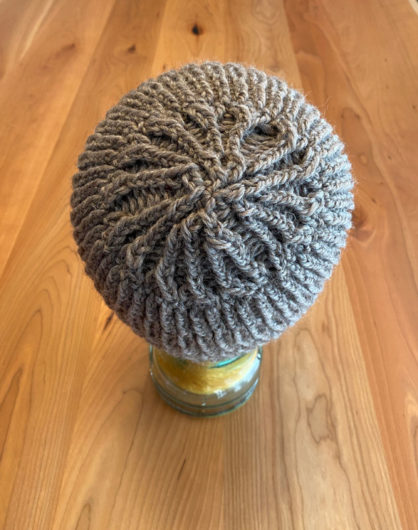 And still the yarn wasn’t used up. This is the Mermaid’s Purl’s Bulky Cabled Hat, another Ravelry freebie. My version used up about 130 yards of yarn. I knit on size 8 US needles for the ribbing and size 10 for the body of the hat. 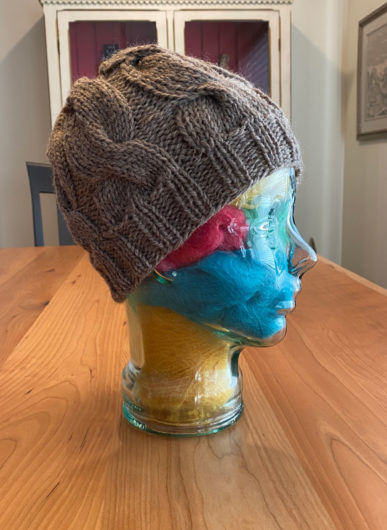 The pattern suggests adding a pom-pom. That would have been nice. But I rather liked the way the decreases resolved and didn’t want to obscure that design. Plus, I figured it made the hat a bit more unisex to leave the pom-pom off. 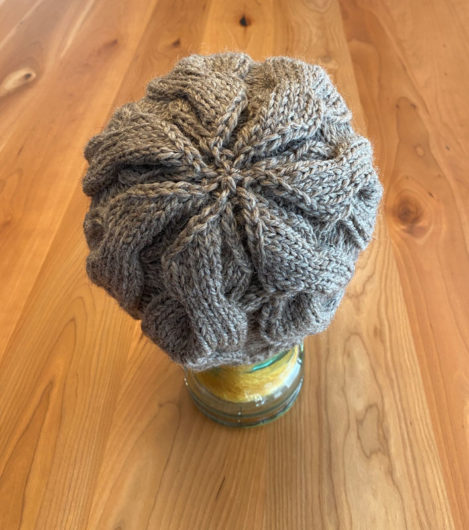 I was very much drawn to this next hat. I do not know how to crochet. I can crochet a chain. And, with a lot of hand-holding, I once crocheted a market bag out of rough kitchen cotton. But, to my knit-trained eyeballs, this hat looked like crochet. It’s Anne Claiborne’s Tenure Track. The pattern calls for Aran weight. But since my bulky weight Ecological Wool had already proved itself a lightweight when it came to gauge, I figured I’d be safe giving this hat a try. 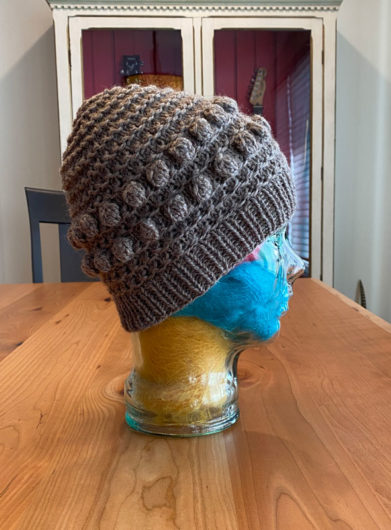 What creates a bit of a crochet vibe is granite stitch through the main body of the hat. I’ve not worked this stitch before. And I’ve not even heard of it. I was hooked. Granite stitch is a super easy sequence of 4 rounds. You knit round 1, purl 2 together throughout round 2, knit in the front and back of each stitch in round 3, and knit round 4. Easy peasy. I love the effect. 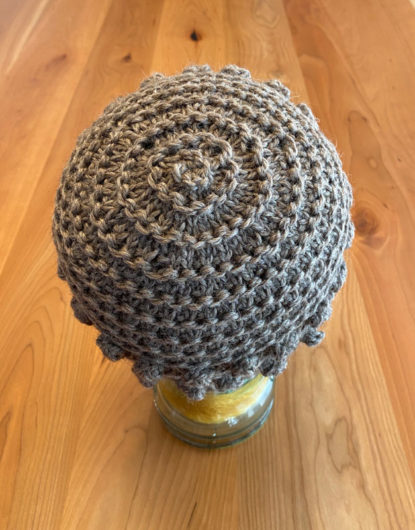 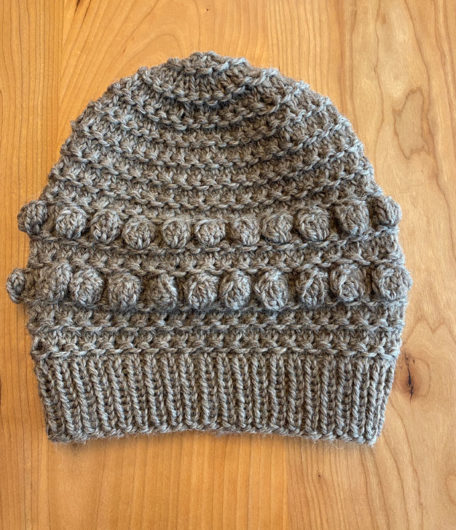 Another feature that makes Tenure Track shine is that it uses very beefy bobbles. If a knitter is going to go to the trouble of bobbling, why end up with limp little dangles? Beefy bobbles are better.  Try to say that three times in a row quickly. I’m inordinately fond of this hat. This one’s for me.