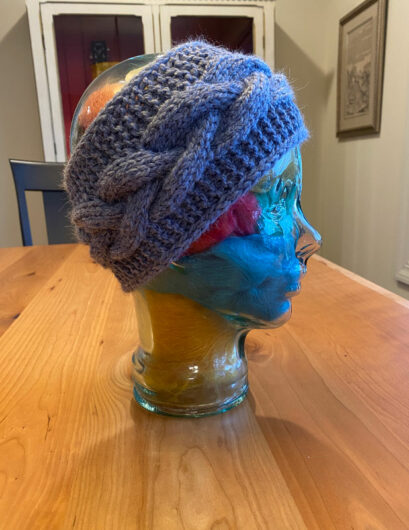 With a few modifications, this is the Ravelry freebie Braided Headband by Ashley Moore. I’d tried to knit something else to begin using up my 3 skeins of King Cole Timeless Chunky. It didn’t work out. Gauge would not happen.

Timeless Chunky is put up in 100 grams balls, 164 yards each. I purchased it on-line  at a hefty discount mostly because I liked the denim colorway and I was curious what 10% alpaca would do to acrylic. My curiosity is satisfied. Apparently it doesn’t do anything good. The yarn is very soft. That’s nice. But it’s splitty. It sheds like crazy. It made me sneeze. And it’s hard to work with every way you can imagine. Life is short and knitting with yarn I don’t love doesn’t seem what I owe myself.

But I decided not to waste this yarn. It’s quite nice once the yarn turns into an accessory.

And so it began. Moore’s headband calls for worsted and the recommended cast-on is 20 stitches. I cast on 26 and worked a 3-stitch I-cord at each each. I like the way the I-cord finishes off the edge. Here’s another look at the headband off-head. 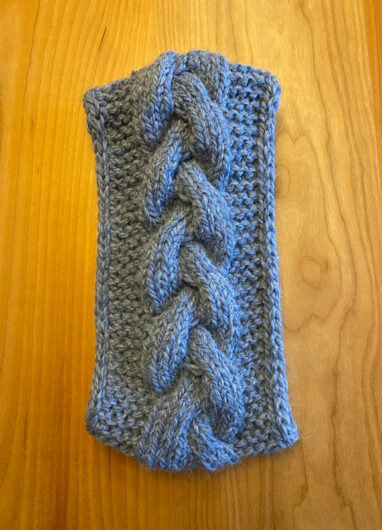 And so it continued. I’m a grown-up knitter. I can finish my yarnie equivalent of a detestable porridge. Maybe I could get some slippers out of this yarn. Mine is Faye Kennington’s very popular slipper pattern. The pattern calls for super bulky and a gauge of 12 stitches and 20 rows to 4 inches. I figured that if I doubled my Timeless Chunky I might be able to turn it into a Timeless Super Bulky. I tested the gauge and, to my surprise, it worked out on US size 10 needles. 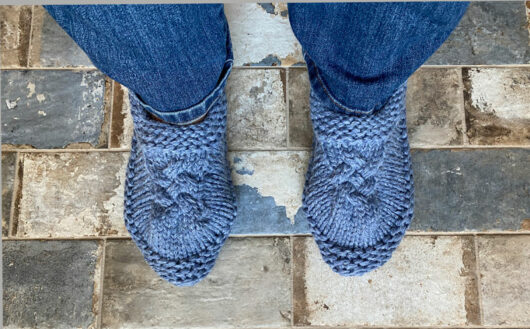 Mine is a surprisingly fun and quick pattern. I chuckle some, though, at the fact that the cables reverse direction from foot to foot so supposedly they are left and right specific. I can’t tell which is which. But I dutifully knit a right and a left slipper. Then I quickly forgot which is which.

Here’s a look at them off-feet. 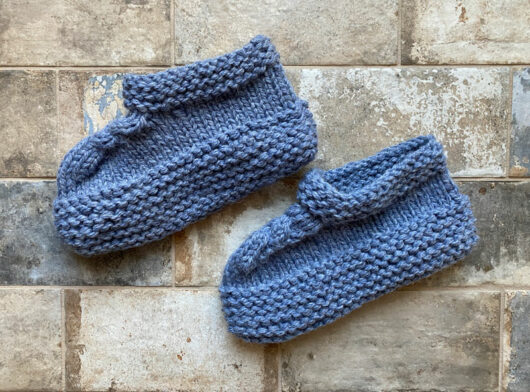 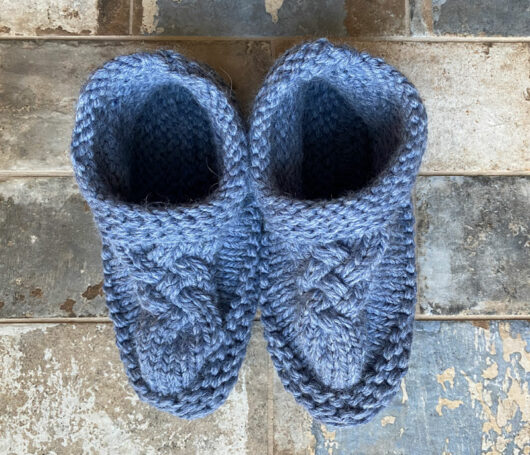 Knitting with this yarn doubled was very hard on my hands. Mine used up 126 grams, 207 yards.

Maybe the eating-your-porridge idea is getting old? How about eating liver and onions when you were a kid? You must sit at the table until you finish at least 2 bites more. I decided to Knit Pippi by Kelly Gubbles, another freebie offered on Ravelry. 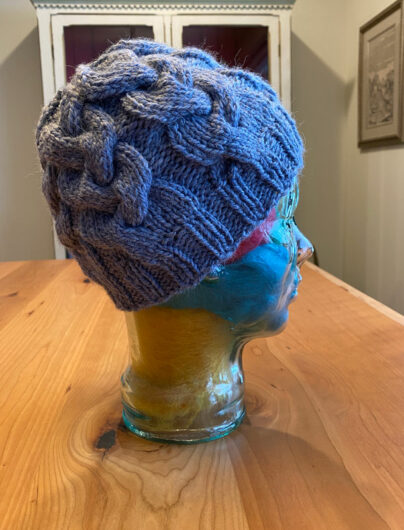 This is such a nice hat. It would look even better knit in a different yarn. Check out the great crown decreases. 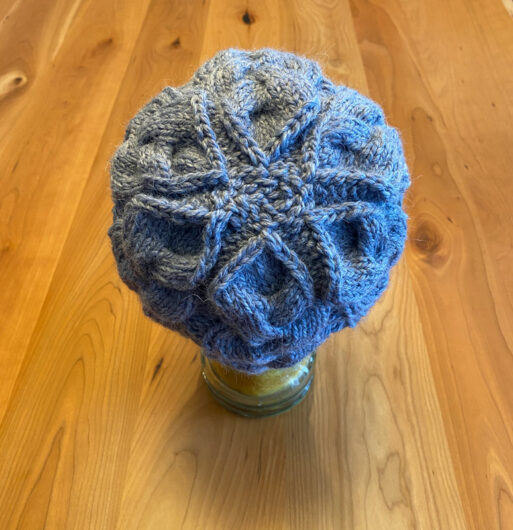 Pippi gobbled up 80 grams, 131 yards.  Lordy. Still 42 grams left. I turned extra stubborn at that point. What should I knit with my remaining 42 grams? 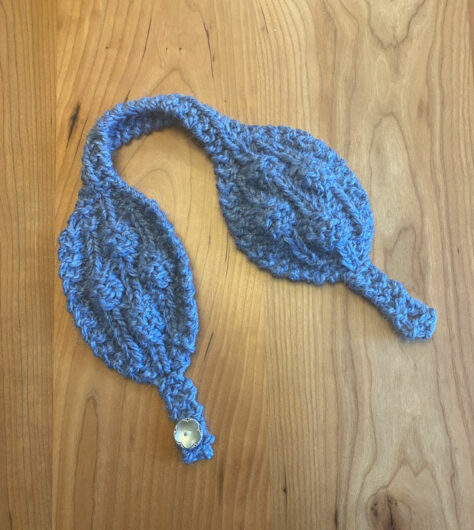 This is not a bikini. It’s Knitwise Design’s Earbuds. You put it over your ears. 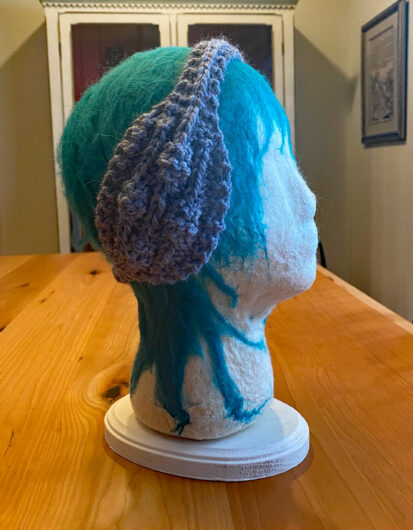 Cute, right? Pop a pair in your coat pocket for times when a chill strikes unexpectedly. Earbuds used up 30 grams. That’s about 49 yards.

With only 12 grams of King Cole Timeless Chunky left I could rest comfortable in the knowledge that the debris littering my black fleece sweatshirt and all my sneezing and my sore hands had been worth it. I had four new accessories for my gift stash. And I tossed that last 12 grams. 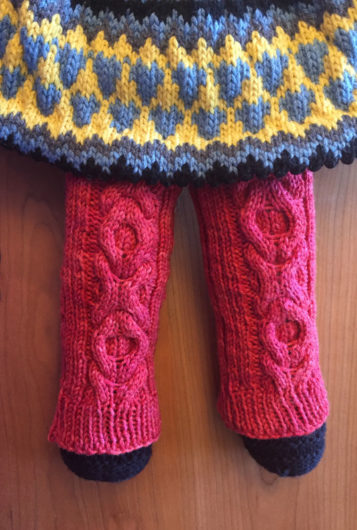 Here’s a closer look, off leg. As with the rest of tincanknit’s patterns, the pattern is sized from baby to adult. What an excellent idea. Newborn Georgia’s leg warmers–which could also serve as arm warmers–are knit in Kollage Yarns Sock-a-licious. It is, or rather was since it’s been discontinued, 70% merino wool, 20% nylon, and 10% silk. 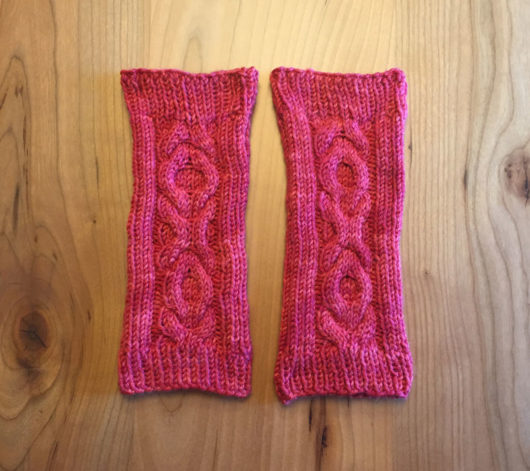 Now we move to a cozy that’s less cute but more useful. These are Kris Basta’s Better Dorm Boots for Men.  This Ravelry freebie is meant to be knit in bulky weight (or worsted weight doubled) and results in a workhorse of a foot cozy. 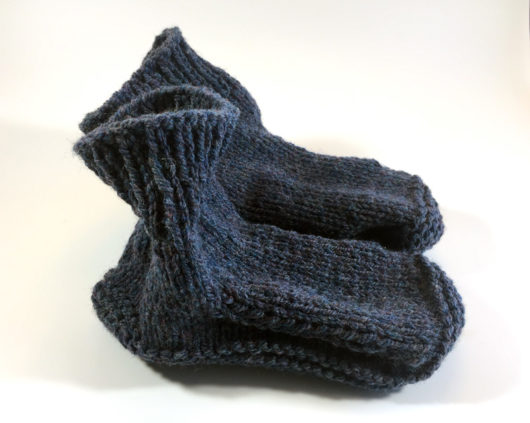 My version of Better Dorm Boots is knit in Plymouth Yarn Chunky to assure that they are machine washable and dryable. The 25% wool helps warm the feet and the 75% acrylic makes sure they’re easy care. 120 grams of chunky is all it took to knit the largest size. 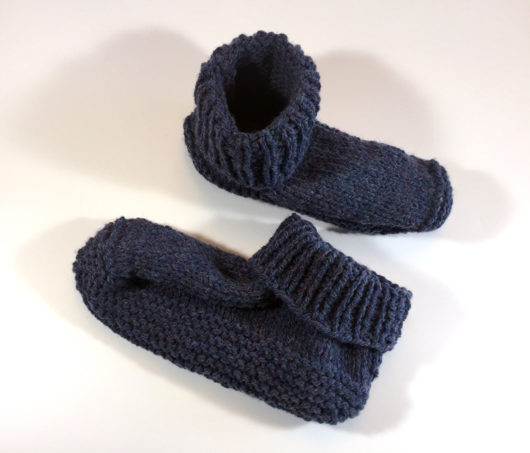 Bob’s feet are enjoying them. 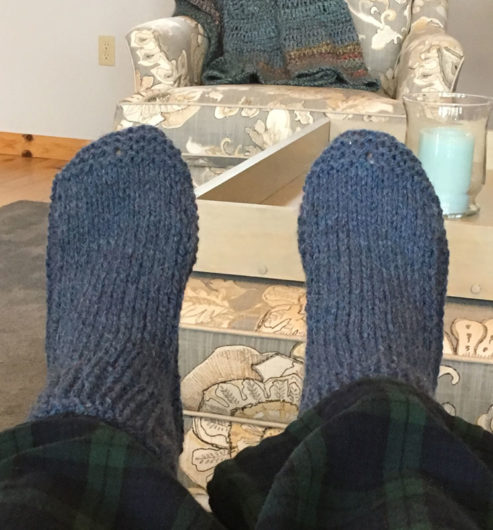 These next handsome socks are knit from Churchmouse Yarn and Teas’ Basic Sock pattern. If you’ve not knit socks before, this pattern–in all its delightful wordiness–is an excellent place to start. I knit mine, well Steve’s, in a yarn he really likes: Blue Moon Fiber Arts Socks That Rock Mediumweight. This is a sport weight, which make for a firm warm sock when knit on a size 1.5 US needle. 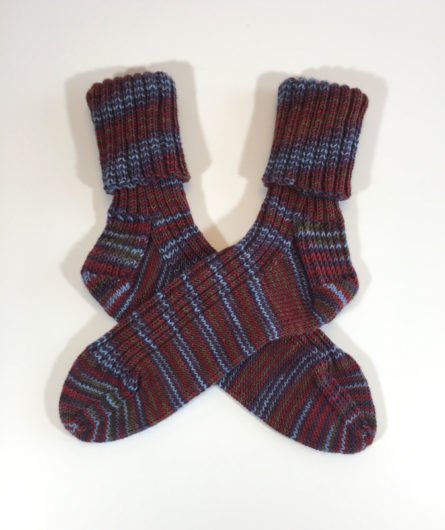 Here are Steve’s feet enjoying a nice nap. The true shades of this colorway are the deep purple and blue shown above on my white backdrop. But I couldn’t resist showing off what a nice fit they turned out to be. 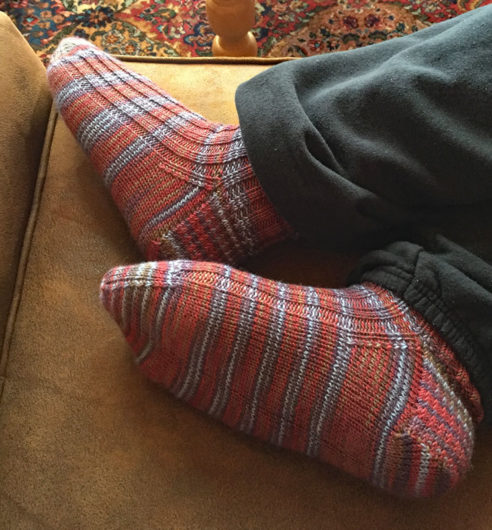 I didn’t want to forget about kids’ feet. These are Mine. They’re actually Isaac’s. But the pattern is Mine by Faye Kennington. 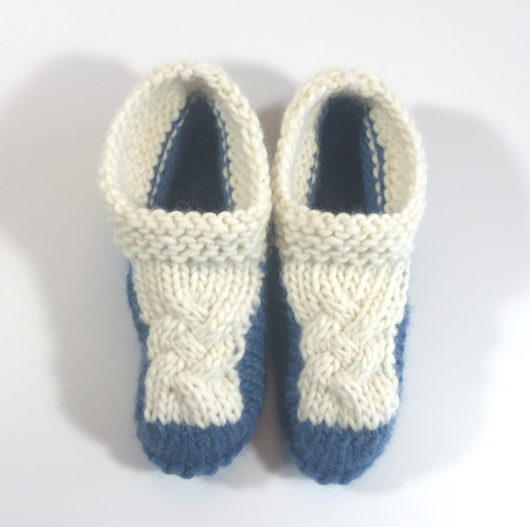 Mine are meant to be knit in a super bulky weight. I tried knitting them in Sirdar Bigga, a super bulky, but my gauge was way off. The slippers would had to have been donated to a basketball player. I downsized to a bulky weight and then my gauge was way off in the other direction. These turned out to be 8 inches long. I knit them in Valley Yarns’ Berkshire Bulky. 85% wool and 15% alpaca so, once they’re washed and thrown in the dryer, they’ll be looking for something closer to a toddler’s feet.

But they were a fun knit. It would have been better, I think, if I’d started my two-color look at the start of the garter stitch rather than just after the cable section. The pick up of stitches isn’t as neat as it should be (and would have been) if I’d changed the color just on the sole section.

Would you possibly like another look at those tincanknits’ leg warmers? My Ravatar insisted on trying on the leg warmers and she’s asking to be featured on the blog in full-body view. She’s also been begging me to knit a pair of tic tac toes just for her. She says her spot on top of my knitting corner bookcase next to glass head gets really chilly sometimes. 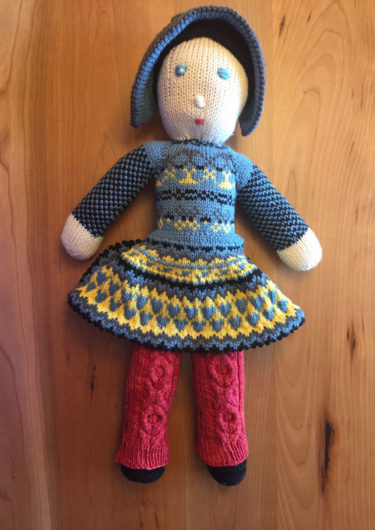