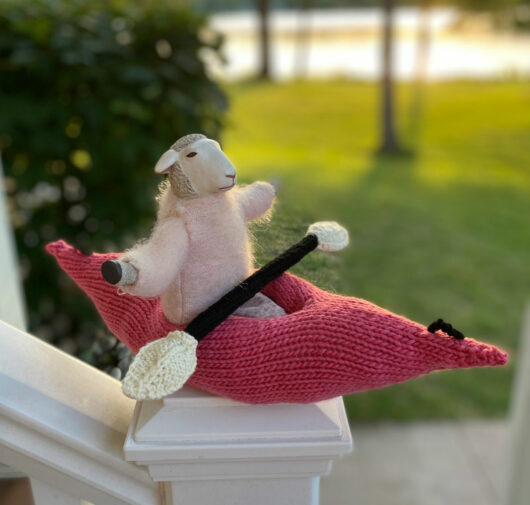 This likely qualifies as my most unusual ask: “Grandma, can you knit a kayak?” My granddaughter explained that her beloved small stuffed wolverine (both her parents are University of Michigan grads) needed a kayak. I didn’t ask why. If your wolverine needs a kayak, it just needs one.

I set to pondering how to knit a kayak. First step, search on Ravelry to see if anyone has released a pattern for a knitted kayak. No. Knitted canoe. No. Knitted boat. Yes, but none that looked promising. Next I looked for patterns of properly shaped fruits or veggies. In Ravelry’s “advanced search” feature you can filter for “food” within the “toys & hobbies” category. 864 knitted items showed up in the search, including some that got close to the shape I needed. Chili peppers and carrots. Not quite. But maybe I could knit the narrow section at both ends instead of just one. Roasted Turkey Leg might work if I didn’t plump up the leg so much.  Bananas. Getting closer.

And then I found Amanda Berry’s  Pea Pod. It’s part of her free series of Vegetable Box patterns.  24 veggies designed for DK weight. Super cute and super generous of her to release the patterns without any charge. Pea Pod pattern in hand, I could set to knitting. No need for the peas.

I used Brown Sheep’s Lamb’s Pride worsted for the kayak. 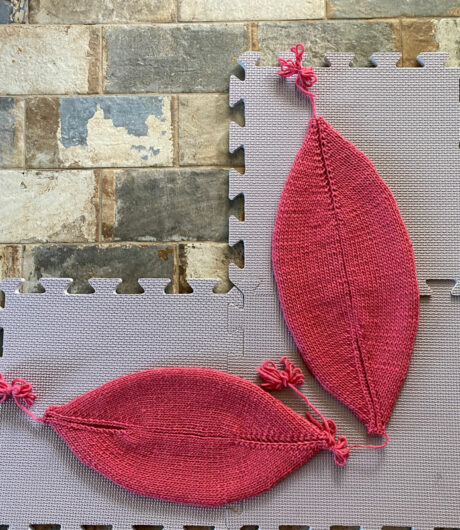 I knit 2 peapods in this beefy worsted yarn–one on needle size 7 US and one on size 6. I figured I’d stiffen the kayak by inserting the smaller one into the larger. I followed Barry’s pattern through Row 12, which took the stitch count to 15. I continued the same centered increases until I reached 33 stitches. For the middle section where there are no increases, I knit 36 rows instead of 18. After that, I knit two centered decreases on each right side row until I got down to 5 stitches and then I bound off. I didn’t work the rows of stockinette at the very end because kayaks in my world are not as pointy as peapods.

I wet-blocked both pieces.

Sewing up was easy. I sewed the larger piece together into a kayak shape by knitting part way down from each end. I left a center cockpit large enough so that the wolverine has room for his feet without getting his long claws stuck. Then I sewed the smaller piece together the same way–slipping the smaller one into the larger one to give the kayak more firmness. It wasn’t firm enough so I added in a bit of polyfill between the layers. Then I just stitched the two kayak shells together.

We are all super diligent about wearing personal flotation devices in our kayaks. I couldn’t let Wolverine set a bad example. 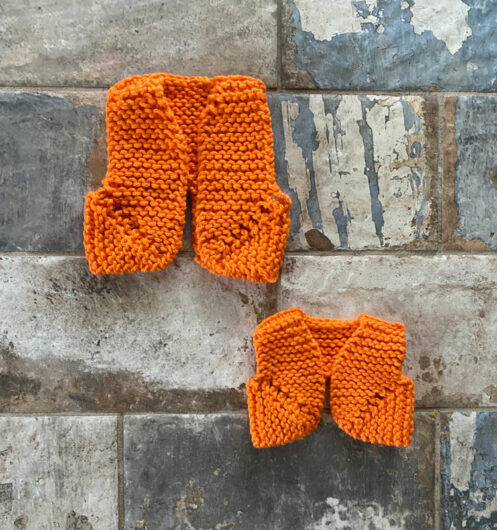 I adapted Meg Swansen’s Baby Bear Ribwarmer pattern for use as a PFD/life jacket. I used Queensland Collection’s Coastal Cotton, a worsted weight. I knit the top ribwarmer on US size 5 needles and followed Swanson’s pattern exactly. I figured it would be too large for Wolverine (and for my Lambie). But I wasn’t sure how to adapt it. In my smaller version, I knit very tightly on size 2.5 US needles. And I knit fewer garter ridges on the back and sides. 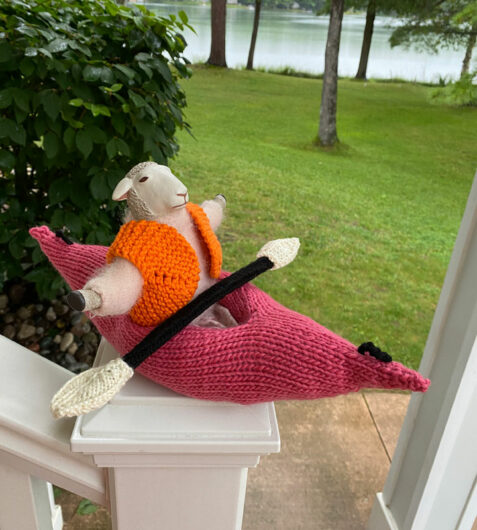 Obviously Wolverine can’t kayak without a paddle. I knit a length of I-cord and then stuffed a plastic straw inside.

At first I tried to tie white guitar picks to the ends of the shaft for the paddle blades. All that did was ruin two perfectly good guitar picks. I ended up knitting two leaf shapes, on double point needles, and sewed them to each end of the shaft. And that’s just a short crochet chain for the carry straps.

My grandkids live many states away from me. Covid prevented us from visiting in Michigan for way too long. Peapod the Kayak was ready and waiting on my granddaughter’s camp bed when she arrived. 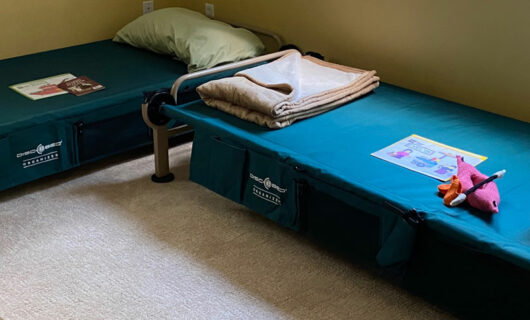 This grandmother gig is so much fun!