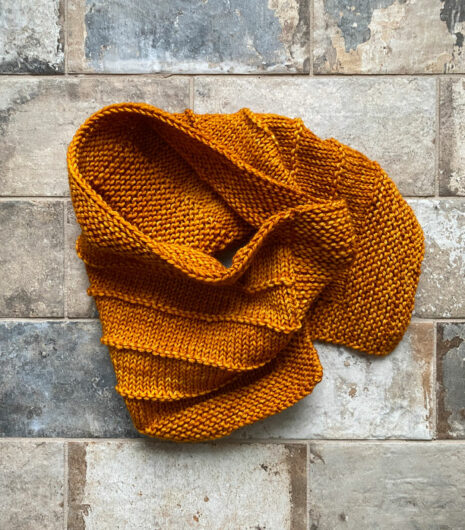 My knitting’s been on a bit of a stutter. Building on my last post, today’s features a few more doubles. This no-nonsense accessory is Elizabeth Smith’s Low-Key Cowl. It’s just a simple combination of knits and purls, worked in the round. But what a nice “just” that turns out to be. Totally wearable. I knit mine in the Sunset colorway of worsted weight Malabrigo Rios. 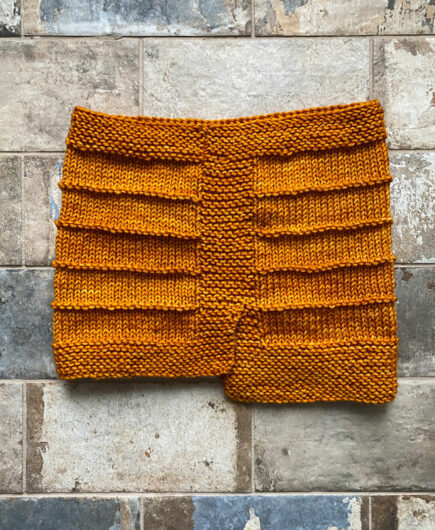 The twist that make Low-Key so wearable? That two-sided split garter stitch edging. Instead of bunching up and crowding the chin like so many other one-skein cowls, this one sits neatly on the broader parts of you. 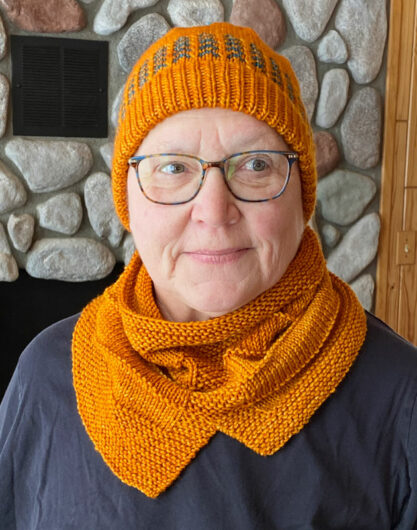 And, of course, you can situate that split wherever you decide it does the most good. Smith’s directions on the simple maneuver that creates the split are spot on. This cowl is totally doable even for a beginning knitter.

My apologies for the photo that looks like I slept in my shirt. Steve took a series of photos. This was the only one where I wore a sort-of-smile that didn’t look: (1) like a smirk, (2) like I was crooked, or (3) funereal. It’s true, though, that I’d just gotten up from a nice long nap exactly as the shirt suggests.

I’d no sooner finished my first Low-Key that I wanted to knit another. 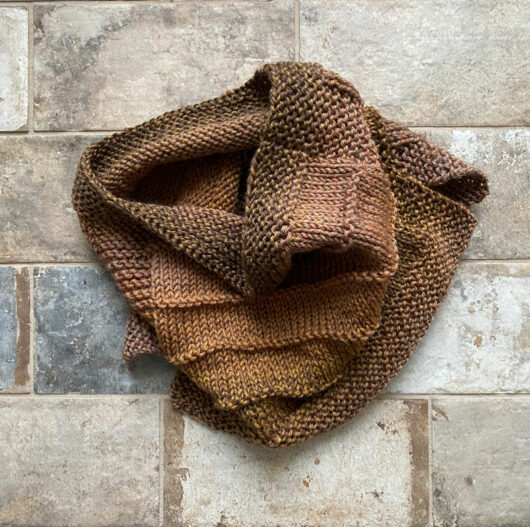 I knit this second one in Cascade Wave, another worsted-weight superwash. I’ve enjoyed knitting with Wave before, just not in this kind of drab colorway, inaptly name “Camo.” Camo, to me, implies there would be some green in it. But this is all shades of brown. 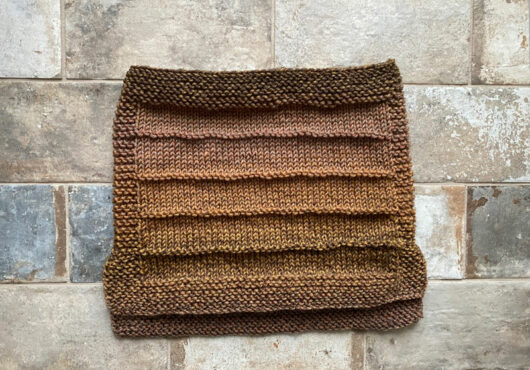 In this view you can see the construction of the two overlapping side slits. A most serviceable unisex cowl.

If my requests are any indication, this might be dubbed the year of the headband. People are asking for headbands. I prefer to think good thoughts about headband popularity rather than that people aren’t liking my hat offerings. This next set of doubles is Lisa McFetridge’s Grindelwald Earband. You’ve seen it here before. 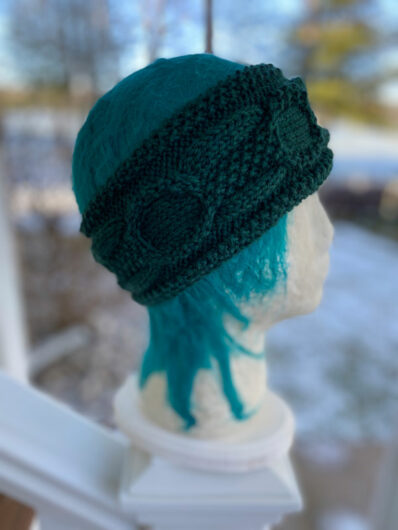 Felt Head is showing this one off, knit in Berroco Ultra Wool. And the second one is knit in Cascade 220 Elysian. Both are worsted weights. 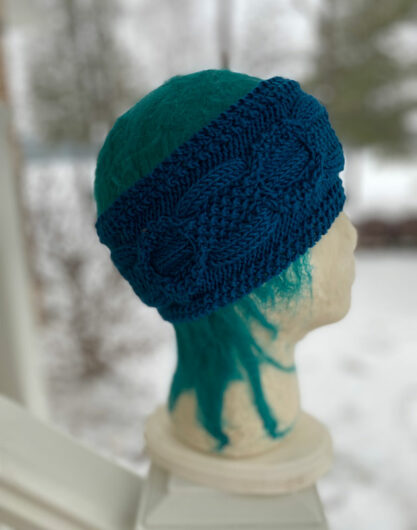 If you have a spare 90 yards or so and are looking for a project, I definitely recommend this one. The cable is very fun to knit. The modifications I made were set up to make the ending graft easier to work.  I used a crochet provisional cast-on instead of the “open” one recommended in the pattern. Then I knit the first row (to avoid the mess that a mix of purls and knits makes when you try to unravel it). Instead of working a kitchener graft with a mix of knits and purls, I worked a 3-needle bind-off. Easy peasy. It’s slightly visible, but so would my kitchener effort have been. And teaching an old dog a new cast-on trick just wasn’t working for me.

Next up is one of my major stutters: Calorimetry.  This is my Number 26 Calorimetry, worked in Lamb’s Pride Worsted. 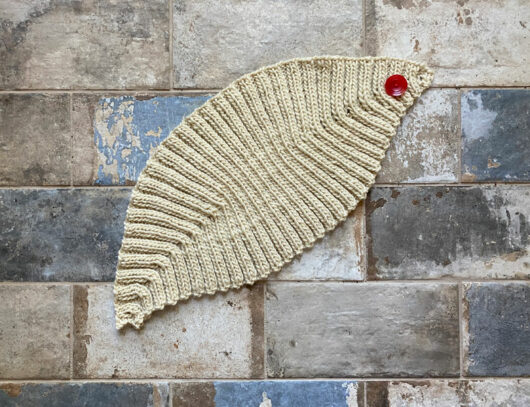 Such an excellent headband, earband, headwarmer, whatever’s your word for it. It’s totally ponytail friendly, though Glass Head has nothing but disdain for such a notion. 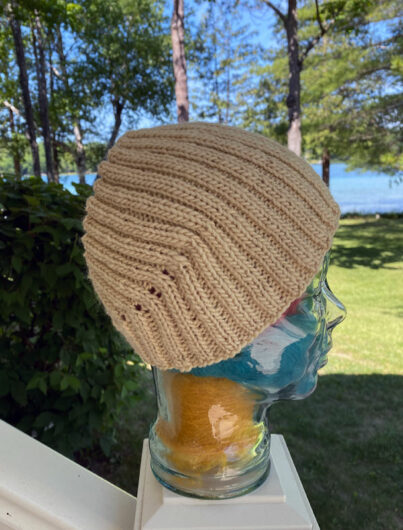 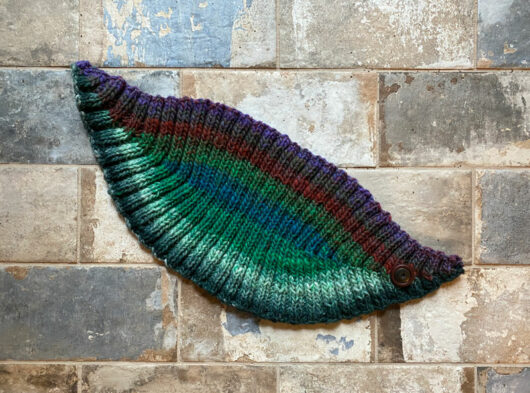 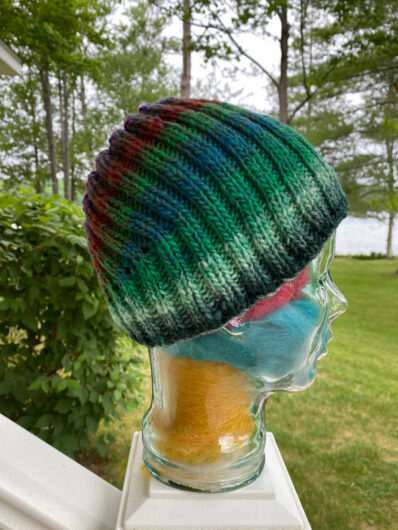