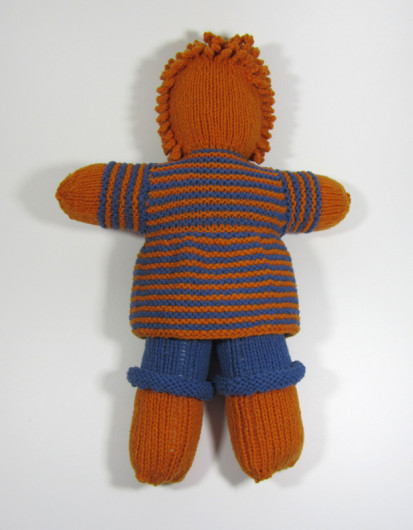 I’ve been a fan of Morehouse Farm patterns and kits for decades. What’s not to like about quality merino wool from a family-owned company that raises sheep, gives away a free pattern every day, writes a quality newsletter, and has great patterns. And I’ve never purchased a Morehouse Farm kit that didn’t leave me with lots of yarn left over. So none of that super-fast knitting as you get to the end of a kitted pattern to try to make sure you won’t run out of yarn.

This is Marina Merino Doll. The pattern is also separately available for purchase on the Morehouse website. It has its challenges, but the knitting is well worth the effort.

Effort? Your wondering what effort something so simple takes? Check out Marina’s lovely curls: 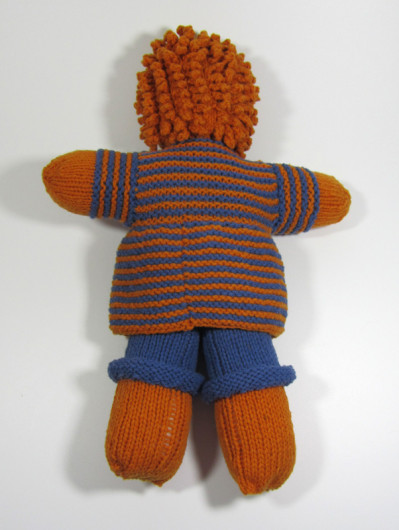 (And don’t notice that seam in her skirt. Merina is very forgiving about her frocks and we should be too.)

This is knit in Morehouse Gator Yarn, a sportweight 2-ply with a fairly tight twist. Knitting the hairdo is honestly not the most fun I’ve had in my knitting life recently. But I really like the result. The pattern calls for tossing the doll in the washing machine to lightly felt it before stuffing. I decided to just steam before stuffing and I’m satisfied with the result.

This next Morehouse kit is Ziraffe (with a few modifications). 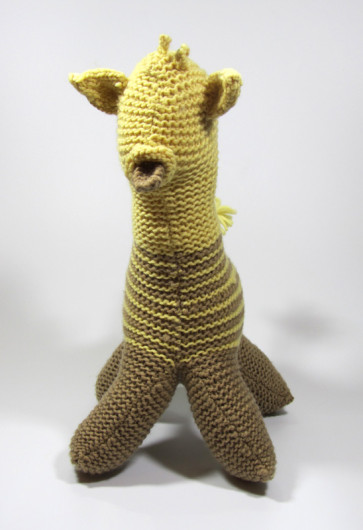 I think one of the most prominent features of a giraffe are its ears. But Ziraffe had no ears. So I cast on 8 stitches, purled one row, and did sort of center decreases. Then I knit a second set slightly smaller than the first. I sewed the sets together, shaping them a bit. My ears are OK, I think. I also added a pair of small velvety horns.

Then I kept looking at him thinking that every giraffe I’ve met has quite a muzzle on him and a tongue that just won’t quit. So I experimented and ended up knitting sort of a small doughnut and sewing it in place. Then came the tongue. I’m satisfied. After all, he’s a ziraffe, not a giraffe. Here’s a look from another angle. 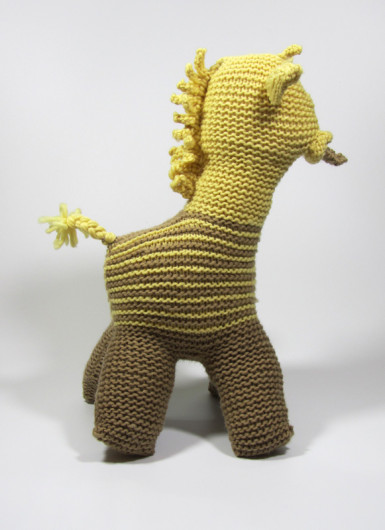 By then modifications started taking over. Instead of a looped mane and tail, I decided ziraffe needed a fancier mane. So I cast on 30 stitches. Knit two. Then I increased 6 stitches in the next stitch. Next, I bound off those 6 stitches and then knit one stitch. I just worked through the 30 stitches this way until all cast-on stitches were worked. Knit one row. Bind off. I sewed the strip of mane on instead of doing the looped mane. It’s just a look I prefer. I also did a thicker braided tail–using 9 strands of yarn, doubled through the body, so there were 6 strands in each section of the braid.

Margrit of Morehouse Farm was the heart and soul and grit of the company for many years. In October of 2015, the sad news was released that she’d lost her long battle with ovarian cancer. A few months before she died, Margrit bravely wrote that she seemed to be losing that battle in what she called her “good news” “bad news” email to customers. She publicly announced her illness and that she was looking for a buyer for her business. And then she offered us great sale prices on items in her shop.

Without fail, working a Morehouse Farm critter scarf or critter pattern brought smiles. Margrit’s patterns and yarns have been a great gift to the knitting universe.