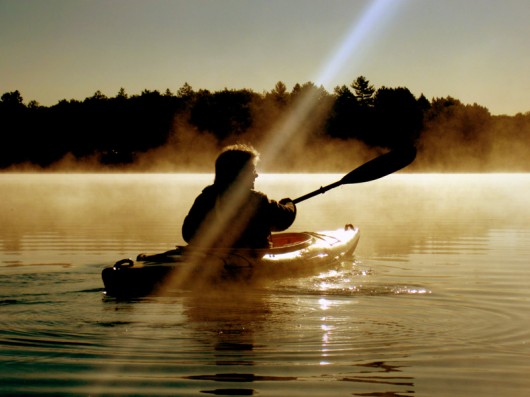 This past Saturday, early in the morning, the fog was just beginning to thin when we headed out to Ghost Bay.  The light was filtered through the fog remains and everything was looking very  golden. There was no breeze.  Like so many fall mornings, there were no other boats or paddlers on the lake.  Not even the fisherman turned up until later in the day.  We shared the lake with an osprey.  A gull snatched a fish from Ghost Bay.  We startled three small ducks.  Small fish moved about in their usual schools in their usual places. Moose the black Labradoodle who lives in the red house greeted us coming and going.  In attendance was his never-far-behind companion, the chubby Beagle whose name we do not know.  On the water of Ghost Bay was the best place to be, drinking our morning cups of coffee.  In a very few weeks we’ll have to pack up the kayaks, but these last paddles of the season are so sweet.