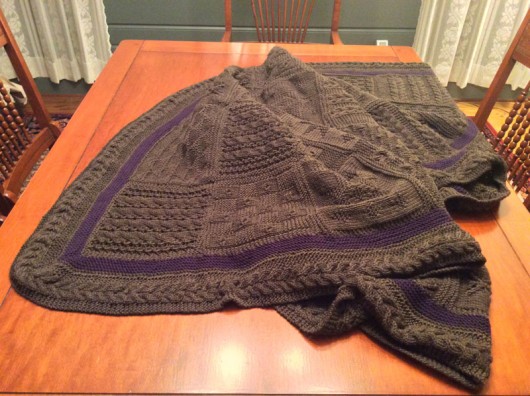 This is Martin Storey’s afghan. Actually it’s Tom’s, but Martin Storey designed it–with a teeny bit of help from me. I made just a few modifications. 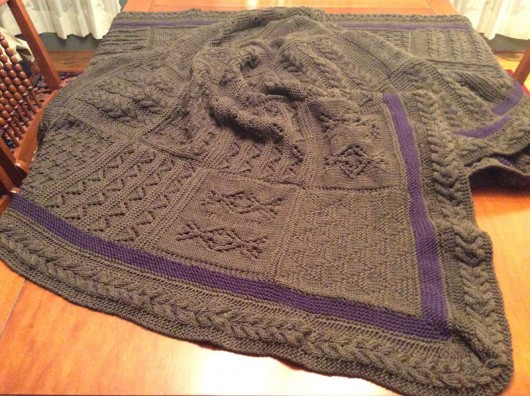 This blanket fits on a queen-sized bed with it’s border hanging a bit down on all sides. That’s a lot of knitting. I used just under 20 skeins of my new favorite yarn: Plymouth Yarn Select Worsted Merino Superwash. I know, that’s a mouthful. But it’s a more descriptive mouthful than Devildash Down The Creek or Mrs. Smith’s Bread Box. Patterns have taken on oddball names of late and yarns now compete in the oddball name department. So I am quite satisfied with Plymouth Yarn Select Worsted Merino Superwash. It tells knitters all they need to know. The only thing wrong with the yarn is, even at 218 yards a skein, $14.95 is too expensive. But when you need 20 skeins that WEBS 25% discount brings the price to the normal and comfortable range for wool. Check out the beautiful colorways. This one is Basil. And that pop of purple border is, well, Purple.

Storey’s pattern is free on the Rowan website, still spread over 9 PDFs. The pattern was first released in weekly installments as a Mystery Knitalong. Being timid about risking committing to a pig-in-a-poke, I waited until hundreds of Ravelers had knit the Storey before I decided to start mine. By then I knew this was going to be fun. 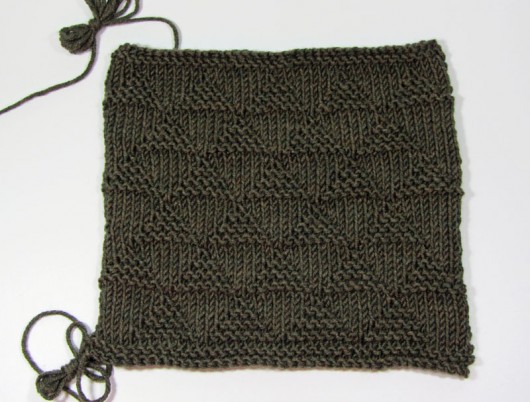 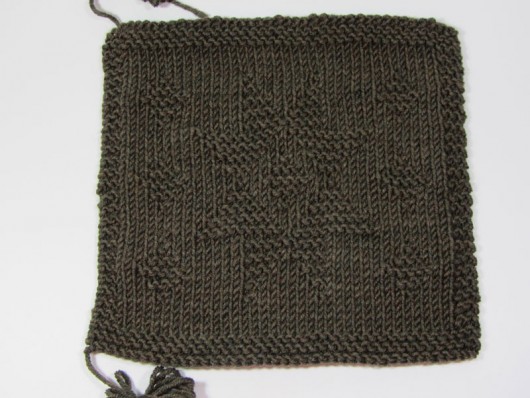 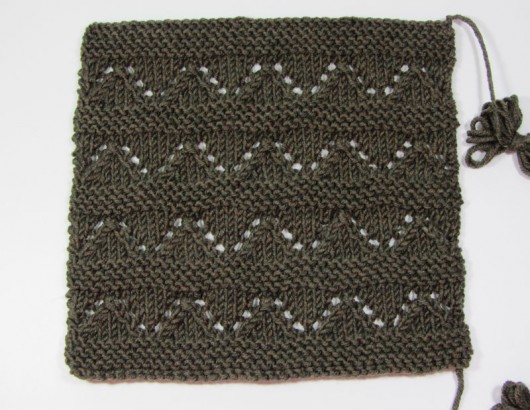 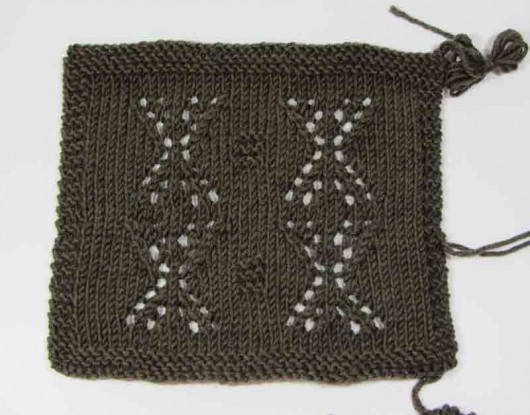 The pathetically limp bobbles of Dots and Dashes: 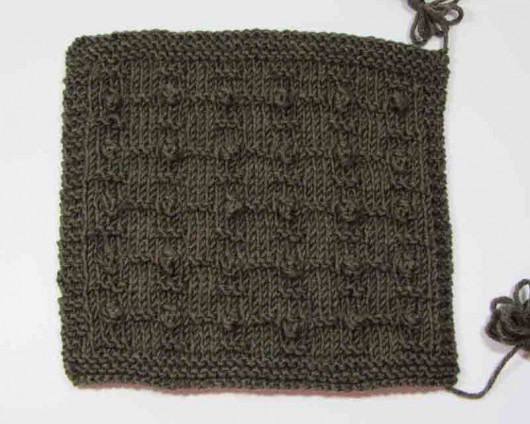 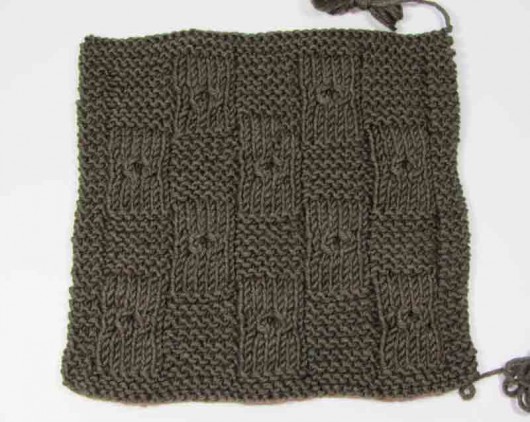 My personal favorite: French Plait (which I adapted for Joley’s Headband): 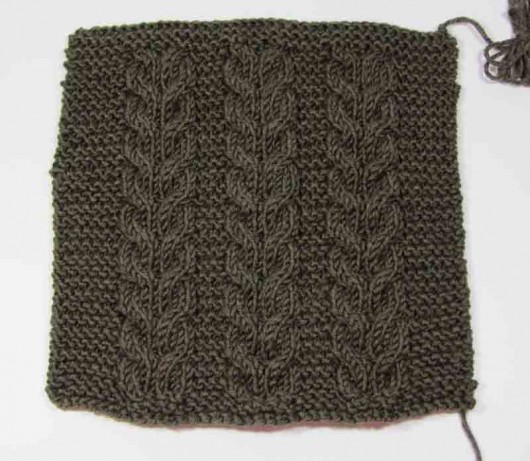 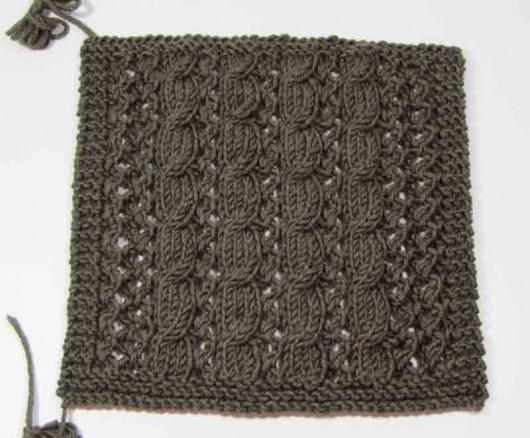 After the great fun of knitting the squares comes the great tedium of mattress-stitching them all together. That took dozens of hours working at the table I inherited from my mom. She used to quilt at this table. And before that it belonged to her mom. Gram used to keep it in the basement and put spare cookware and dishes on it.

Here’s one of the major “ta da” moments–finishing the mattress-stitching: 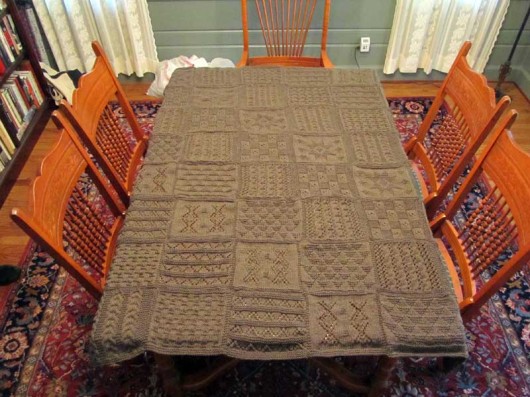 It’s also when I realized that I sewed one of the Garter Waves squares in upside down. See it? The fourth square as you move on the diagonal from the bottom right hand corner. Either that, or I sewed its five sibs upside down. It’s OK though. It will be just as warm the way I left it.

Storey’s border has been described as a pizza pie crust. He would have you cast on 11 stitches, work a twisted cable, knit on those 11 stitches for a zillion inches, and then sew it on. Yuck. Here’s what his looks like. I think mine is an improvement: 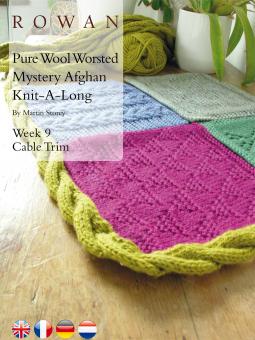 More on my tweak of Storey’s fine pattern in a bit. You may have noticed Storey’s concept of this afghan is (ahem) more colorful than mine:

A lot more colorful. My version is inspired by the afghan that Rowan Ambassador, knitter extraordinare, Dayana Krawchuk (Dayana on Rav) knit. You can see it here, on her blog, with internal links discussing her modifications. Actually, it’s not fair to say she inspired mine. I was a total copycat. Except for the border.

After all that mattress-stitching to get the pile of squares turned into a blanket, I didn’t want to face more sewing.

I decided I’d do a mitered corner garter edge in a pop of color. Here’s a closer look: 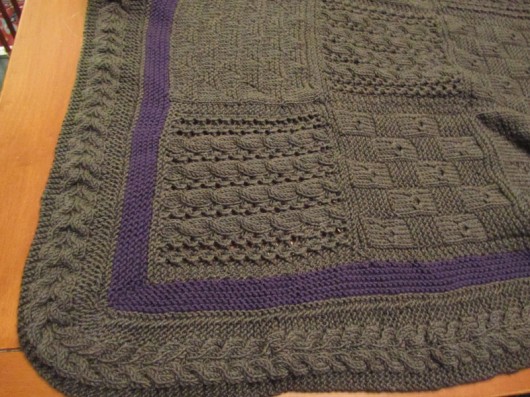 I picked up stitches all around the edge, about 35 to a square. That might have been a few stitches too many. But it was behaving nicely at that point. No curling or ruffling.  I used four 60-inch circulars to pick up the stitches and knit the border. Then I knit 5 garter stitch ridges (10 rows) in purple and one ridge (two rows) in basil.  I mitered the corners, increasing one stitch on each side of the marked corner stitch on each knit round (working the purl rounds without any increases).

Next came the last tweak.

For the cabled border, I cast on 17 stitches on a double pointed needle and knit one row. On row two, I began the following sequence, using the cable from the French Plait square:

At the corners: three stitches before the corner stitch marker, I worked about 18 rows of border (just as the above) but not attaching it to the body of the blanket. I put the next 6 stitches on a yarn holder (same color as body of yarn). On the last stitch of the 18 unattached rows, I knit through the back of  the next stitch still being held on the needle. (Skipping those 6 stitches on the yarn holder). I knit a few more inches of attached border, then went back and used the yarn holding the 6 stitches to sew the gap closed. Turning the corner this way worked pretty well. 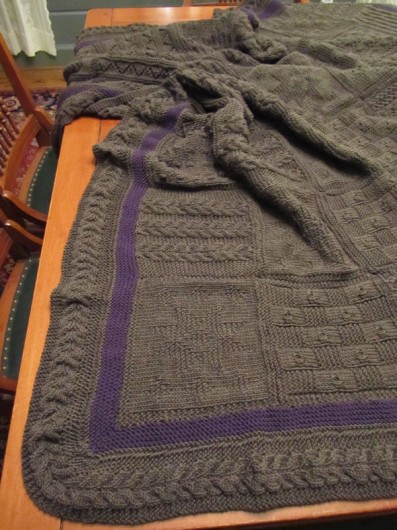 The only problem with my modification is that I’ve got a bit of a ruffle going. Tom doesn’t mind. Neither do I. Knitting this border on, instead of sewing it on, was a good idea for a sewing-impaired knitter like me. If you decide to try it, be prepared for a long slog, though.

I really like the results and love the idea that it will keep my brother warm.