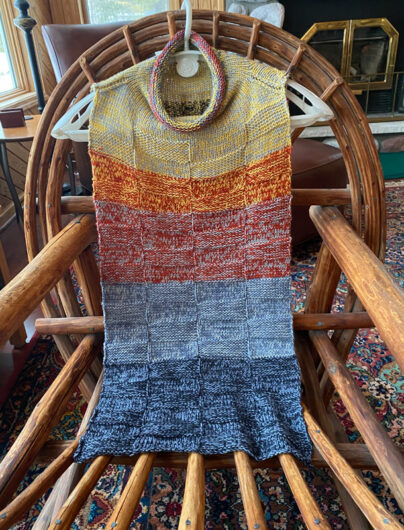 This is my Swarf, half scarf half cowl. It’s an interesting Cecelia Compochiaro design included in Modern Daily Knitters Field Guide#19.  A lot of knitters–possibly recalling the “dickies” of yesteryear–have enjoyed the knitting and the wearing of Swarf. Swarf is sort of a dickie on steroids.

Swarf was my first formal venture into marling, the technique where a knitter combines two strands of different colors that evolve in sequence as the garment evolves. 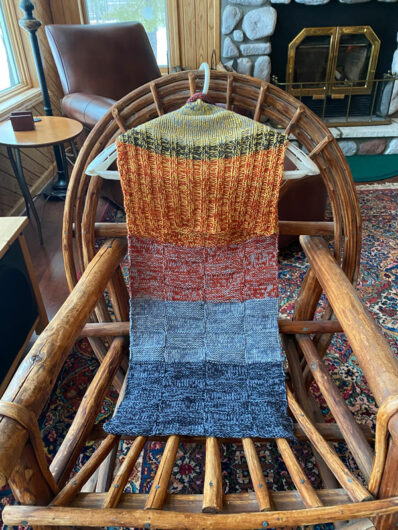 That’s ribbing on Swarf’s back including where it looks like a mixture of Kraft Spaghettios and Kraft Macaroni. Compochiaro gives lots of hints about how to decide what colors will look good marled together. I guess I fell asleep during that part. That dark gray and yellow wasn’t helping out the overall look either. 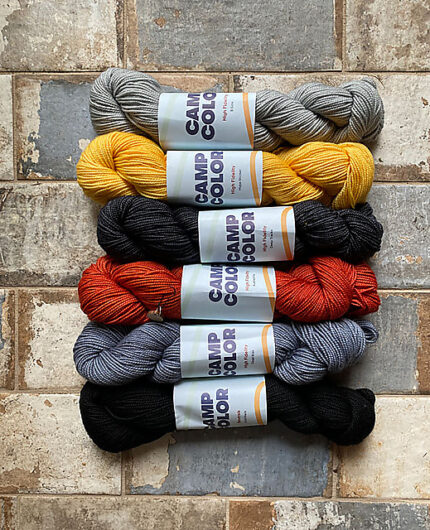 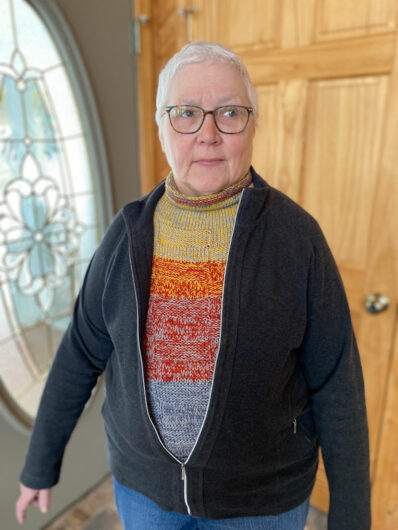 Except for the Spagettios section, it didn’t look too bad worn. But the wearing of Swarf was a pain. I had a lot of trouble getting the back to lay flat and unruffled and to stay that way. I’m sure the rounding of my upper back wasn’t helping. It also moved around some in the front. And anyway, I was mourning for my beautiful yarn and those deep saturated colors.

Time to frog. Even though the yarn spent only a few days in my Swarf, it was tightly kinked. I was defeated by the thought of soaking the yarn to relax the kinks and daunted by the thought of drying it. Ernestine, one of my guildmates, suggested that I wind the yarn onto my swift, tie it in a few places, and steam it. That turned out to be an excellent idea. It didn’t release every stinkin’ kink, mostly because I was concerned that too much steam might damage the yarn. But the technique worked really well. I could watch the yarn relax as I steamed.

My yarn was ready for its second chance. Samantha West’s excellent freebie, Diagonal Lines Hat, looked like a good candidate. 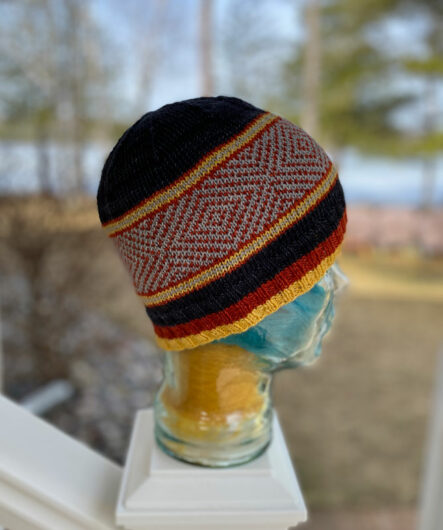 Pretty nifty. And a fun knit. The diagonal lines section is easy peasy stranded work, with no long floats to catch. The only modification I made was in the ribbing section. I separated the ribbed stripes by one round of all knitted stitches. That eliminated those half-one-color-half-the -other purl stitches and kept the stripes crisply defined. 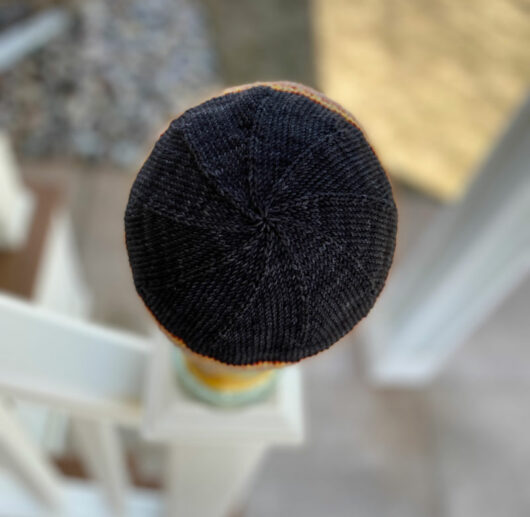 While knitting Diagonal Lines, I discovered that the almost-black dark gray was bleeding like crazy. It dyed my stitch markers and my white Bryspun needles. And my hands and fingers, of course. Unfortunate. I decided to steam the hat rather than do a wet block. Dollars to donuts the dark dye will bleed all over the other colors at the first washing. “Color Catcher” will hopefully come to the rescue.

I’ll need to not give this hat to Steve. Sweating might make it look like he’s tattooed a skullcap on his bald head. With that, I decided that my 50 grams of black (yet unused) and the remaining dark gray would be relegated to my stash for sewing facial feature on stuffies.

Next up is another Samantha West freebie: A Little Alien Hat. 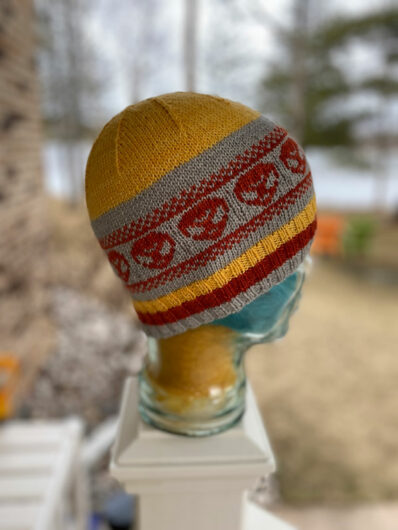 Steve is my test for whether non-knitters will be able to make out a knitted motif. He earned that role after I asked him whether he could see what picture was knitted (at a very tight gauge) into a hat. He looked and said he saw skeletons dancing on gravestones. It was actually a castle with pennants flying from turrets. Steve looked at my completed hat and quickly said it was the Roswell Alien. 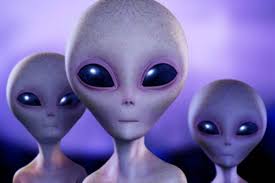 I added stripes to the ribbing and changed colors about an inch before the crown decreases started just because, well, because I had lots of colors. I planned to knit the aliens in yellow rather than burnt orange but there wasn’t enough contrast between the yellow and the gray to make the motif pop. I added one extra round of salt ‘n pepper bands to frame the alien section. I also shortened the hat to eliminate the folded ribbing, starting the crown decreases 6.5 inches from the cast-on edge (as in Diagonal Lines). 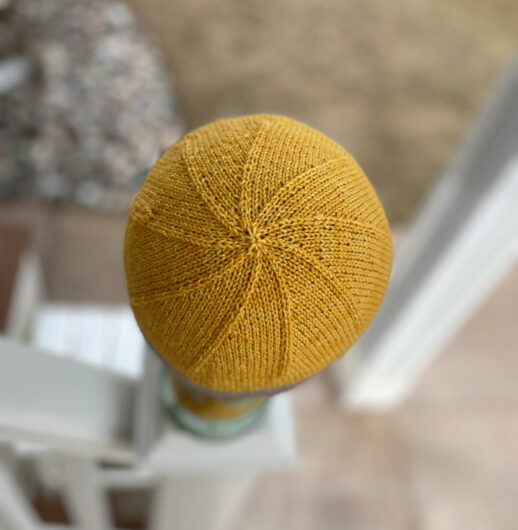 I had smallish amounts of yellow and orange left in my Camp Colors’ stash and the medium gray. I’ve knit Melinda Vermeer’s Bayfront Cap nine times before and thought it would be a good choice for the yarn. 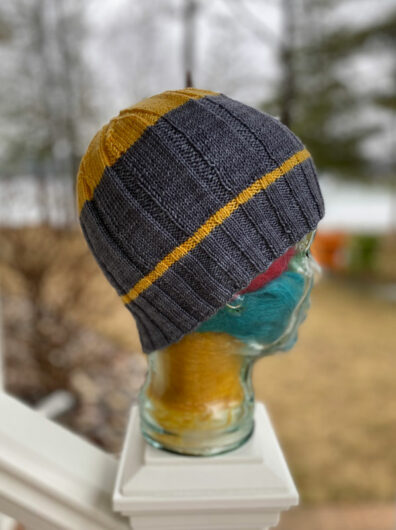 Bayfront didn’t disappoint. At first it just looks like an interesting take on a ribbed hat, with 3 by 3 ribbing that widens out to 3 by 9 in the body of the hat. Then you get to the crown decrease section. 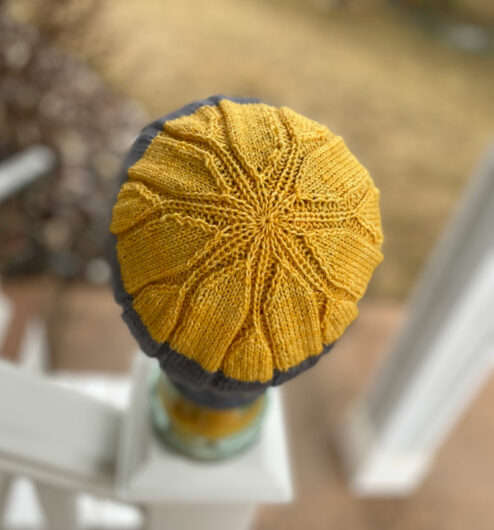 Gulp. Every time I knit this very organic-looking crown I’m reminded again about how much I love to knit hats. 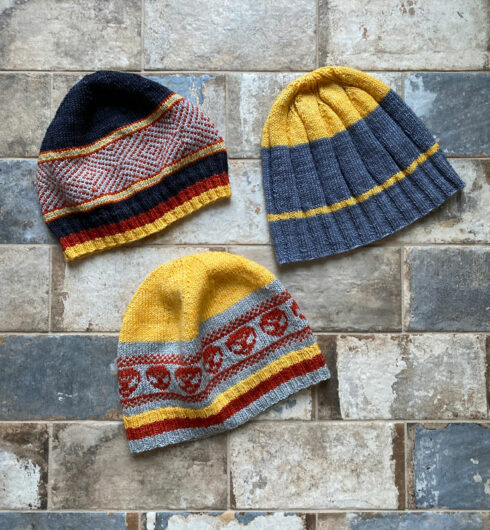