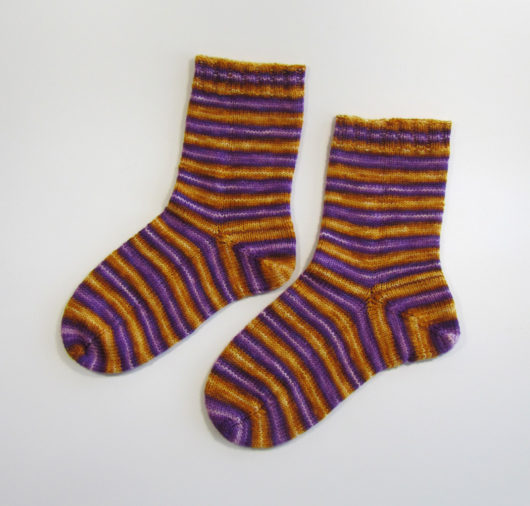 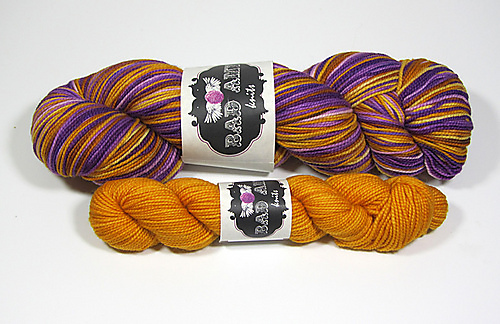 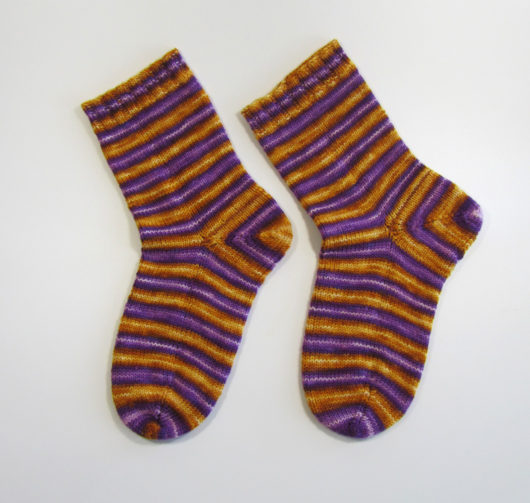 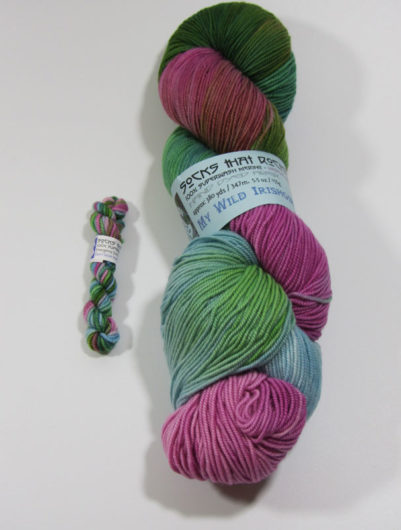 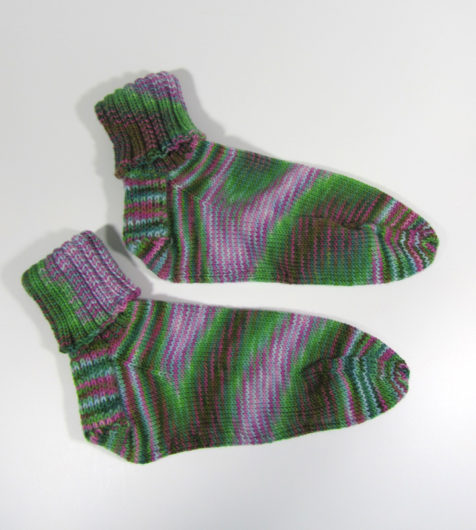 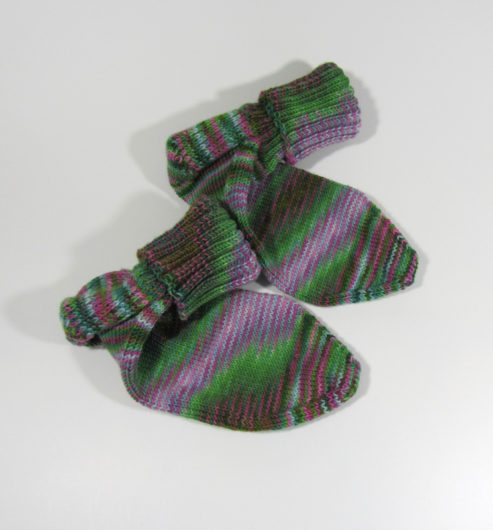 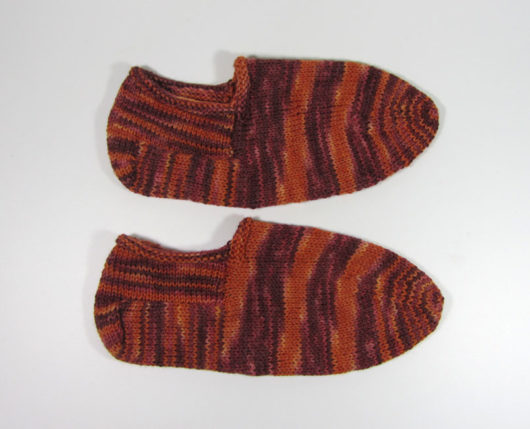 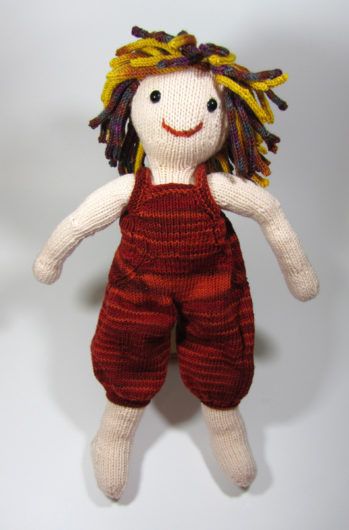 Jutta’s skin is knit in a discontinued Cascade Yarn Aran-weight: Longwood. I searched for a good long while for just the right shade of pinky beige skin that I had in mind. A friend of mine spotted one lone ball of Longwood “Dew” hiding out in a sale bin. Perfect!

Jutta’s overalls are knit in “medium weight” Socks That Rock, a Blue Moon Fiber Arts, special colorway:”Doodle Doodle Honey Cocka Valkyrie Fledge.” I know, you’re thinking I made that up. I didn’t. But it is great yarn despite its name. I am very proud of myself for deciding to use it–especially the contrasting colorway that gave Jutta’s hair such a distinctive look. Medium weight is basically a DK.

Here’s Jutta from behind. 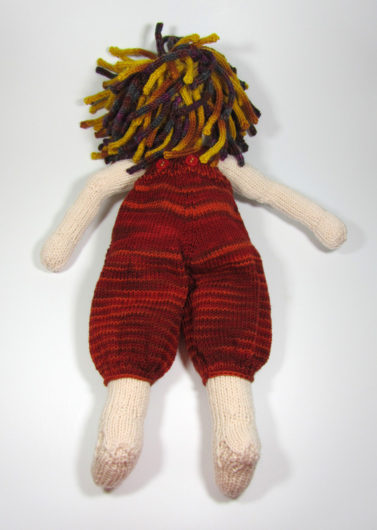 The I-cord hair is fiddly to knit, for sure. But Wilschut’s very detailed and clear pattern teaches a way to knit multiple I-cords at the same time. I won’t spill the beans. But it’s very ingenious. After a bit I was knitting eight strands at a time.

Speaking of Jutta’s behind. 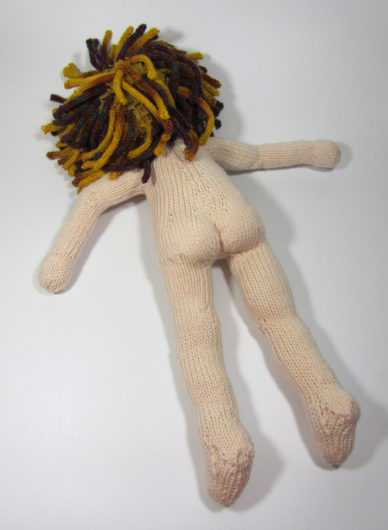 You can see that the detail is quite extraordinary. Butt, hands, elbows, knees, heels. Even a belly button.

Look close–the belly button is subtle, and knitted in, not sewn on top.

One distinctive feature of Wilschut’s designs is that there are no parts to sew together. They are knit in the round. Off the needles. Stuff. No hours and hours of sewing, as with so many toy patterns. The only sewing you’ll need is to attach ears to some of the critters and to sew up the stuffing seams. 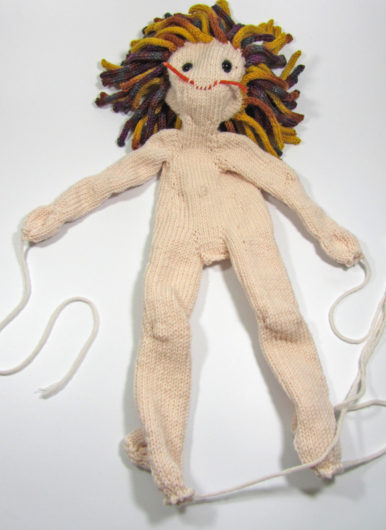 The pattern even provides detailed eye and mouth placement. That is extremely helpful to the sewing and embroidery impaired among us. I’ve not used safety eyes before, but I decided to give that a try with Jutta. I am quite satisfied.

Here’s Jutta’s skin from the back view. 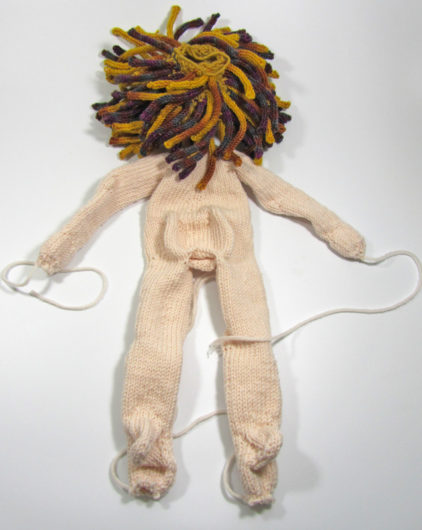 Even the placement of the I-cord hair is controlled by the designer. You knit what’s basically Jutta’s scalp in the hair color. And you place an I-cord strand on each garter stitch bump. So clever! 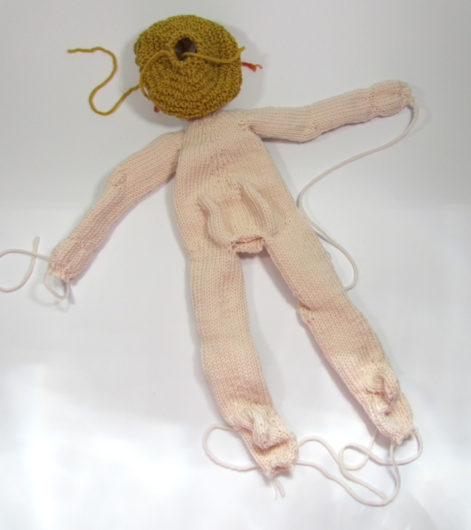 I’ve made Joris the dragon, Jacobus the boy monkey, Saar the girl monkey, Vera the bear, and Karel the bunny. And some of these stuffed buddies I’ve knit more than once. With each new knit I’m impressed all over again with this designer. If you decide to try one of her patterns, you’ll not be disappointed. And I’m pretty sure that my soon-to-be-two year old granddaughter won’t be disappointed with Jutta.