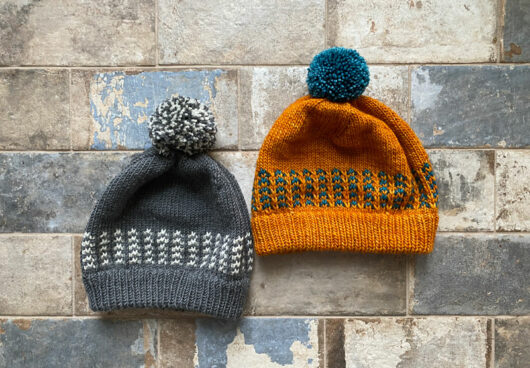 I think these are super cute and so do hundreds of others who’ve knitted Jelka since Isabell Kraemer released the pattern as a freebie in December of 2021. Jelka is a very easy slip stitch pattern, with a doubled brim that will keep ears warm and dry. 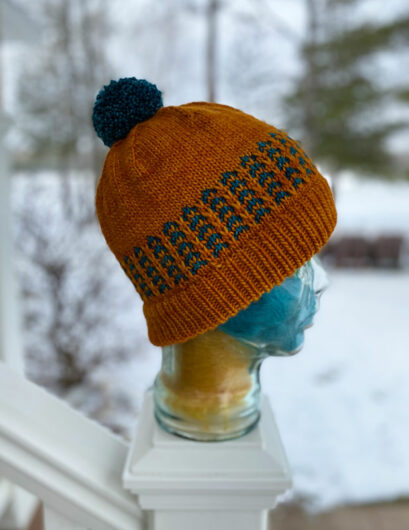 Of course the pompom is optional. I think they usually look ratty after the hat is washed, so I often steer clear of pompoms. But this hat just seemed to want one. So I obliged.

I knit my first Jelka in Malabrigo Rios. The main color is Sunset and the contrast color is Teal Feather. 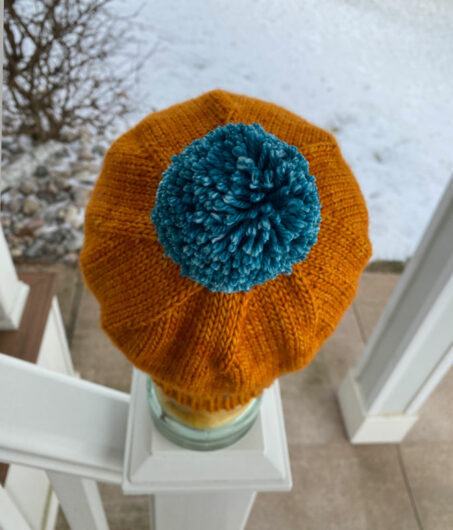 The hat benefited by a steam blocking to encourage the slipped stitches to relax into the fabric. 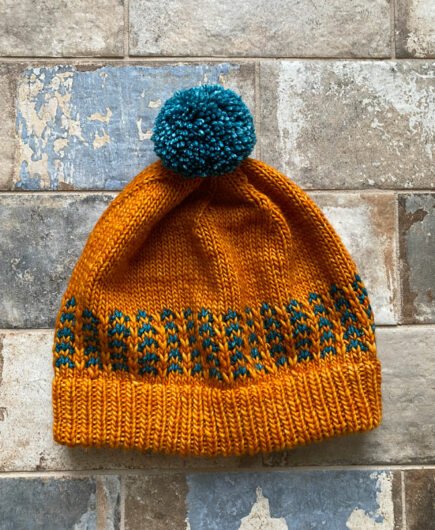 Why would anyone want to knit something more than once? I know that there are many knitters who ask that question out of sincere puzzlement. They want each knitting adventure to be, well, an adventure. Take it from someone who’s knit 50 Acorn Hill Ponies, 26 Calorimetry earwarmers, 16 Sunrise Side Bears, 15 Windschief hats, 13 Noro Striped Scarves, 11 Fetching fingerless mitts, 11 The Thinker hats, 11 Rambling Rows blankets, 10 Better Dorm Boots, and 9 Rib Sampler Scarves, that some knitters take solace in the familiar. Sometimes knitting adventures aren’t what I crave.

As soon as I knit my first Jelka, I wanted to knit another. I don’t think there’s a much higher compliment to a designer than to feel that way. 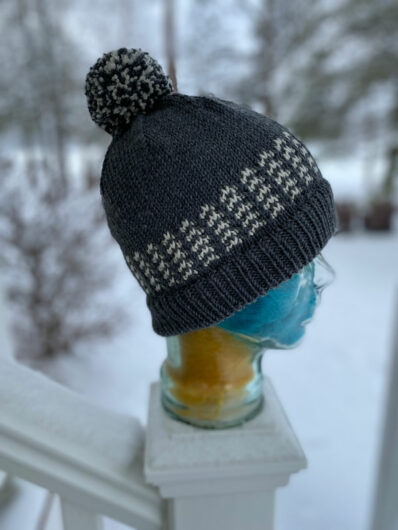 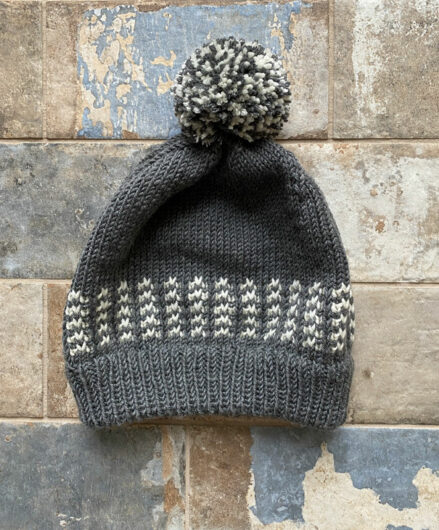 I was curious how a much more tame color combination would work out. My sense is that it worked out quite nicely. 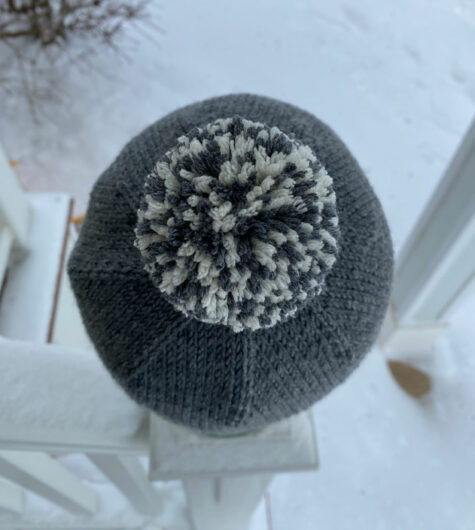 I even decided to add a two-color pompom.

I’ve already mentioned that I’ve knit The Thinker hat 11 times. Recently I realized it had been nearly 2 years since I’d returned to Susan Villas Lewis’ excellent pattern. Thinkers look especially nice in solid colors that show off the stitches. And I had recently purchased some solid skeins of Sugar Bush Bold worsted. First came one. 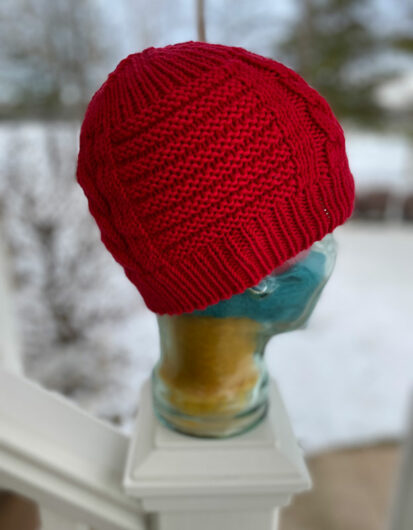 And immediately came another. The second is worked in a nice bright shade of Bold tailor-made for walks during hunting season. 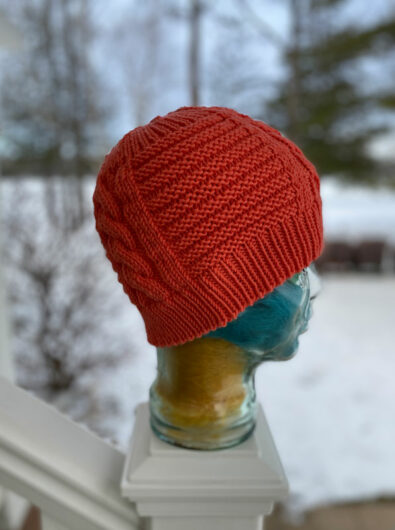 The Thinker has an excellent pinwheel crown decrease. It looks a little odd laying flat. But just tell your recipients to stop laughing and put it on their heads because what first looks pointy behaves absolutely non-pointy. 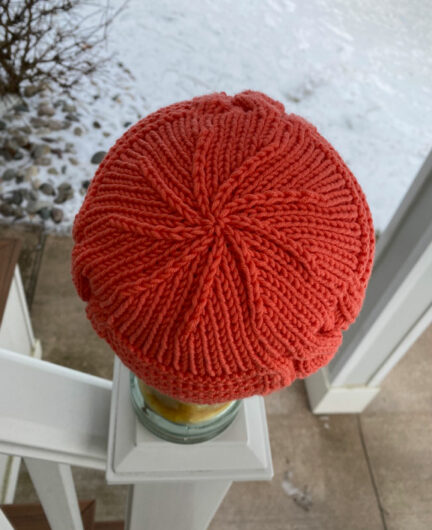 One of my best knitting buddies, Dot, has knit multiples of this next hat. I figured that must mean it’s an excellent knit. Jesie Ostermiller’s Portsmouth Beanie did not disappoint. I knit my first one in Cascade Yarn’s Elysian. It’s a new yarn to me. It’s an easy-care worsted in 60% merino, 40% acrylic. I liked the yarn. I really like this unisex pattern. 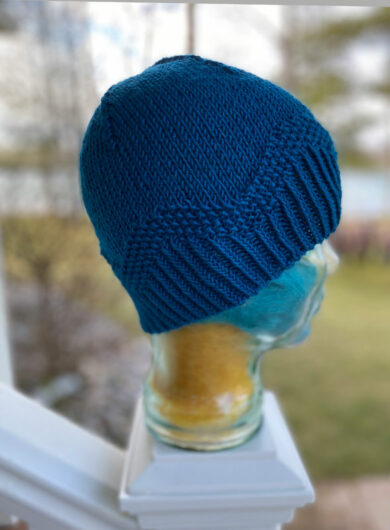 The pattern also eats yarn very daintily. I knit the largest size and only used 127 yards.

I knit a second Portsmouth Beanie in Sugar Bush Bold. I apologize for that funny little purl hiccup in the middle of my ribbed brim. If I’d have seen it before the photograph, I’d have fixed it. But it’s still a very serviceable and attractive hat. 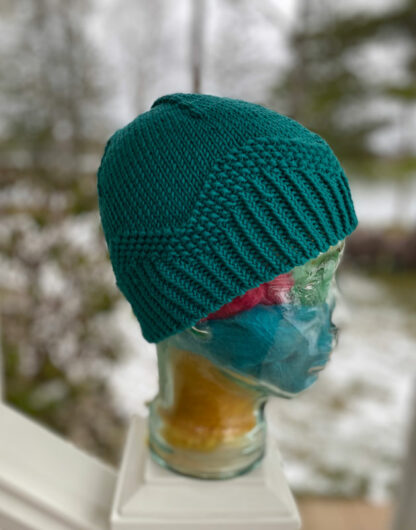 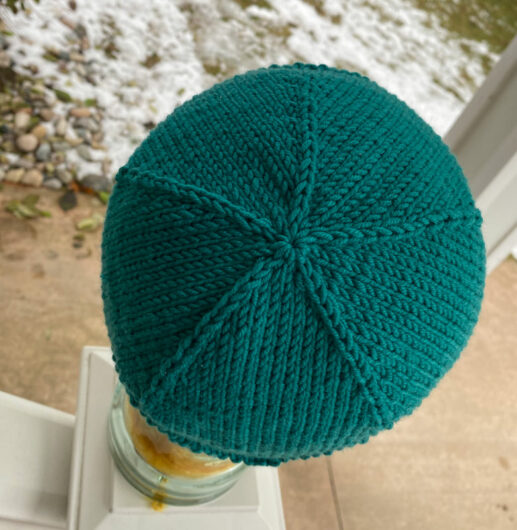 I see no shame in knitting doubles. Maybe there’s a little bit of shame in knitting 50 of the same ponies or 11 of the same blankets. I’ve already confessed my guilt on that score. At a minimum it shows my knitting imagination is easily satisfied. I genuinely enjoy seeing the same pattern knit in different yarns. But likely the major motivation is that such knitting feels comfortable and familiar. Sort of chicken soup for my hands.