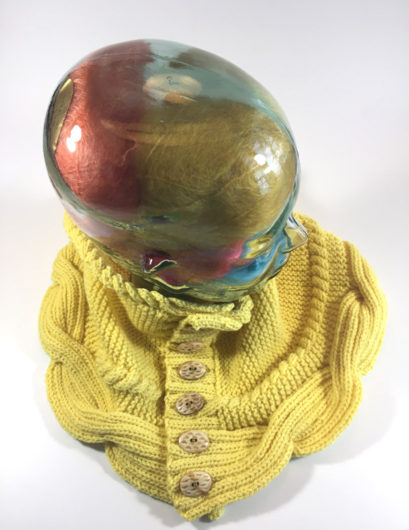 This pretty is Betangled Cowl by Jennifer Weissman. It’s designed for an Aran weight yarn. But I decided to knit it in Stonehedge Fiber Shepherd’s wool, a worsted. It was mid-December during a dreary stretch of days. I succumbed to the lemon yellow colorway. And that luxurious 24-stitch cable. Yep. 24-stitch. I was finally able to use a gigantic j-hook cable needle that I’ve never used before to hold those 12 stitches.

I obviously knew that I was under gauge. This wool, in these stitches, wasn’t happy until I moved down to a size 8 (and 7) US-sized needle. Since it was going to be lemon yellow come hell or high water, I decided I’d accept a narrower version and just add some pattern repeats. My gauge was 20 stitches to 4 inches (not the 17 the pattern calls for) and 34 rows to 4 inches (not 26).  I knit the medium size and ended up knitting 10 pattern repeats (rather than the 8 that the pattern called for). Mine is 9.5 inches tall and 36.5 inches edge-to-edge. 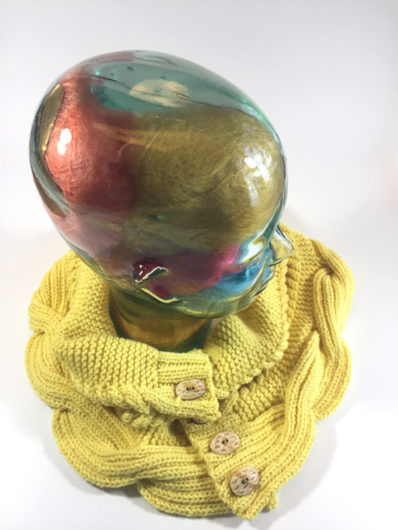 I like this one. A lot. The pattern is available for purchase here on Ravelry.

I thought I’d sworn off buttoned cowls. Generally, even lightweight buttons add more weight to a cowl than I prefer. And then the cowl sags along the button-band line. But Betangled bewitched me. If I make this again, I believe I’ll do a provisional cast-on, ditch the buttons, and graft the ends together. I’m not sure how I’d manage the ribbing sections though.

This looks and wears much better on my glass head than it does on me. It seems to take more precise wearing skills than I possess. But I’ve been advised “Just put it on and ignore it because it’s beautiful.”

I sewed a button on both sides of the top buttonhole so that when the cowl flips forward, there will be a button. 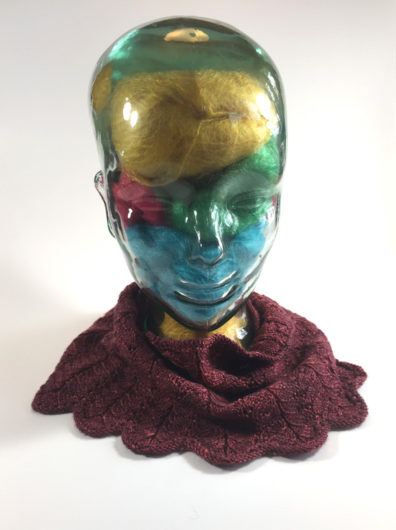 This cowl was a lot of work. 252 stitches and size 2 US needles. There are no resting rows in the 4-round, 18-stitch repeat lace pattern. But the pattern is not complicated. To the awake and alert, anyway. I am not a skilled lace knitter and I was able to manage it without lifelines, just using stitch markers to frame the pattern repeats. 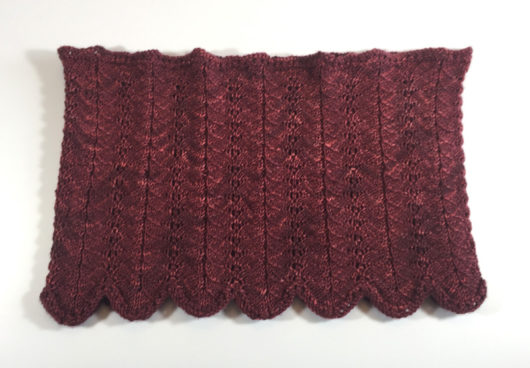 I used Elizabeth Zimmerman’s sewn bind-off, as the pattern suggests. It’s very elastic, which assures that the bind-off won’t bind. And it does leave the fabric somewhat wavy. But it’s not much of an echo of the waviness of the cast-on edge. Sort of the nature of the beast, I guess. This cowl needed a rather stern wet block to open up the pattern. I wasn’t successful, though, in matching the bind-off edge to the handsome cast-on edge.

This next pattern is Martina Behm’s great freebie, Wolkig. It’s another fingering-weight cowl. But this one-row pattern (that’s not a misprint) is incredibly easy to knit. 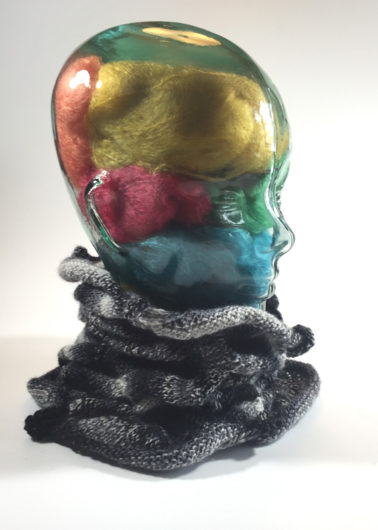 Behm explains: “The Wolkig cowl is twisted and has extra volume due to strategically worked decreases and increases, so it can be stretched a little to fit comfortably over your head when putting it on. Stretched in the other direction (lengthwise), it will fit snugly around your neck without leaving any gaps where the cold wind might sneak in.” Here’s a look at it off-neck. 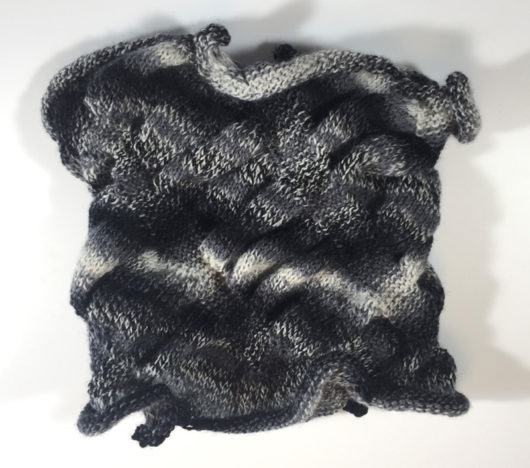 Wolkig, which means “cloud” in German, is even interesting on its non-public side, as this next photo shows. That’s especially true worked in a variegated yarn like my Zauberball by Schoppel-Wolle. Zauberball is a sportweight, though maybe a lightweight sportweight. It still worked out well. 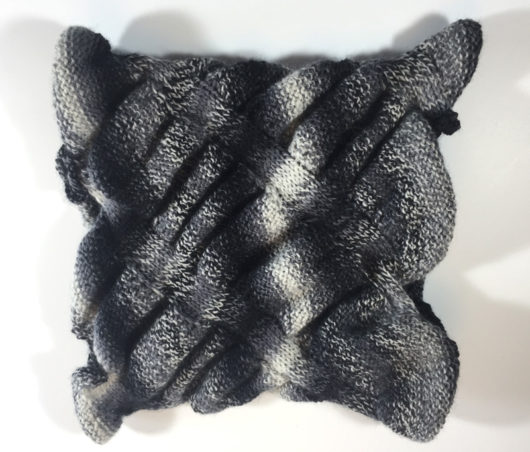 This is my fourth Wolkig. You might want to check out the rest. I measure the success of this pattern partly by the fact that every Wolkig I’ve knit is sprucing up somebody else’s neck. My knitworthy folks like this pattern a lot. I really should knit one for me.