US-23 from just south of Alpena to just north of Harrisville is a feast of public folk art. Dinosaur Gardens is so 1950’s that you’ll want to dust off your hula hoop and bring your poodle skirt out of its mothballs. 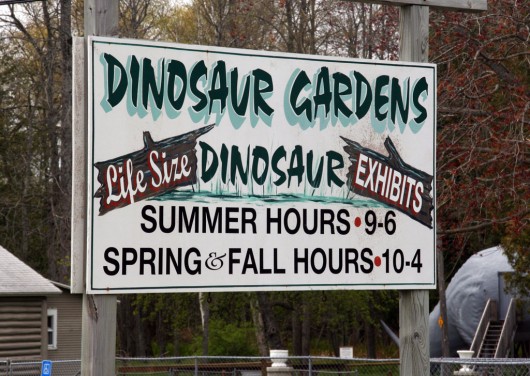 I confess to not having toured Dinosaur Gardens or even played putt-putt at its Raptor Retreat 18-hole mini golf course. So, being uninformed, I’m not sure what happens when a visitor climbs the ladder of this brontosaurus. Does a knock on the door gain admittance to the wonder of a bronti’s innards? Is it maybe the clever entrance to a slide down his tail? 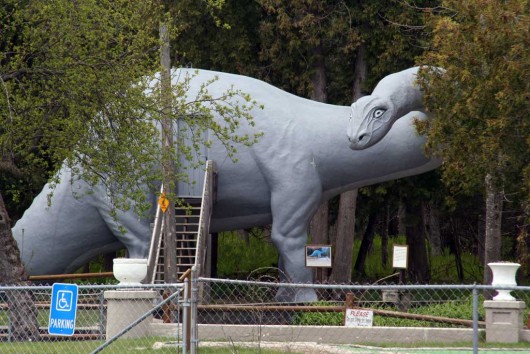 I do think that the brontosaurus painter could have jazzed this specimen up a bit. Was he really this drab? If so, I suppose realism might be best. Probably my childhood was a tad too influenced by my favorite inflatable float toy, “Dino,” the big green Sinclair Oil Company mascot. Poor Dino. He blew away one day on Elk Lake and was never seen again. He’s probably shown up on Ebay by now.

Dinosaur Garden did more with green in this fellow, obviously pieced together at the shoulder. A masterpiece, with more of that  60’s comic book character look. He even has a spotlight that shines on him at night. 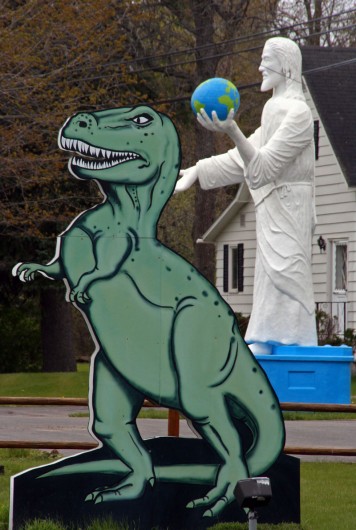 But it is the 20-foot Jesus with a bowling ball that really steals the show at Dinosaur Gardens. With both dinosaurs and God and bowling, you can hit an awful lot of fan bases. Since 1957, Jesus has graced the site. To me, it looks like he even got a recent fresh coat of paint. 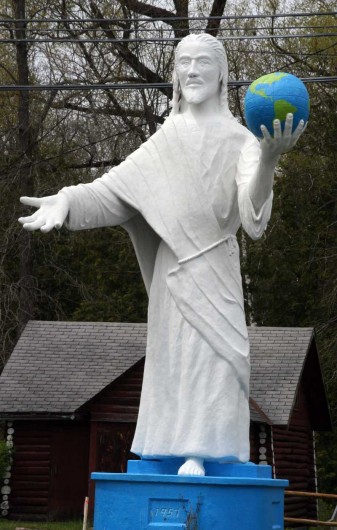 Further on down US-23, a very muscular very hairy Paul Bunyan and Babe the Blue Ox stand guard among the tall red pines. Paul is still looking quite impressive, but Babe could definitely use a fresh coat of blue paint. Probably once Jesus’s baseplate got its paint there wasn’t enough left over for Babe. 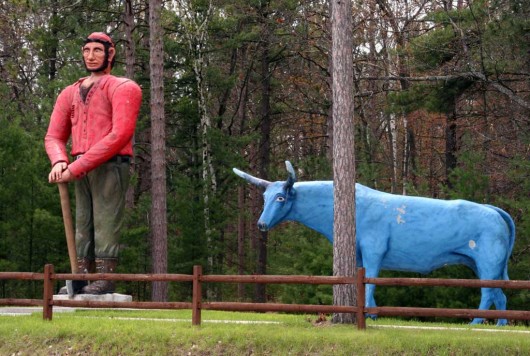 Word is that Babe was a great help to Paul around the logging camp. Babe could pull anything with two ends and was really useful straightening out twisted logging roads. Paul would then pick up the extra miles of road, once the kinks were all pulled out, and use the leftovers in other places where he needed road. And Paul, we all know that Paul was so big it took five storks to deliver him to his parents.

The first Paul is near Ossineke. The next Paul, without his Babe, is in downtown Oscoda. The modern hardhat is an inspired touch. 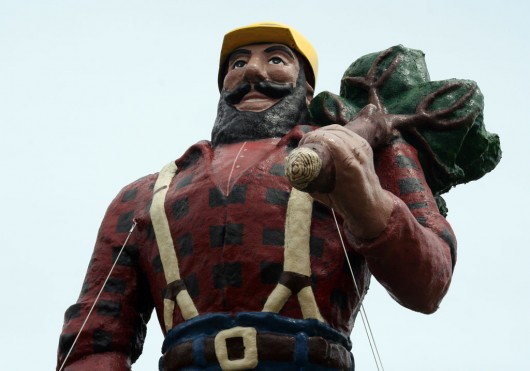 The day we visited, even hard-hatted Paul was unable to keep US-23 open and traffic moving through Oscoda. The road was torn up, blocked off, and we had to detour all around the downtown business district.  But all businesses are open during construction (even Rent-A-Hubby if you need to rent one).

Further on down US-23, one woodcarver has an entire yard full of wares to choose from. There are lots of samples on display including this wonderful boreal dead fish collection. 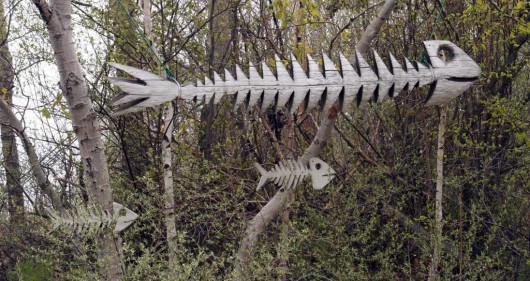 But my personal favorite among his work is dinodog: 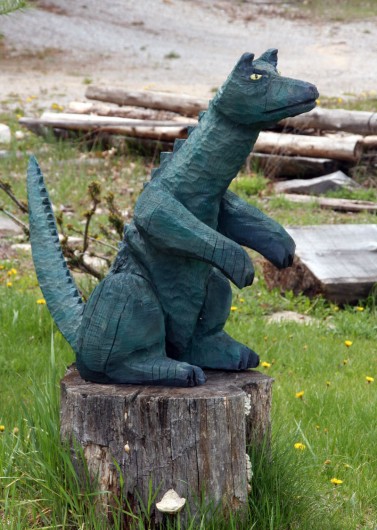 I can definitely see this guy on Antiques Road Show about 50 years from now. “You didn’t scrub the fungus off the base–that’s good, if you had it would have lost thousands of dollars in value.” “He has some cracking, but that just enhances his worth. It shows he spent lots of time outside.” I admire this carver’s sense of humor. He also carves lots of bears. I’m pretty sure that this one, on a residential lawn south of the carver’s shop, is the same artist’s work. But I’m fairly sure that the bunny ears are not original equipment. 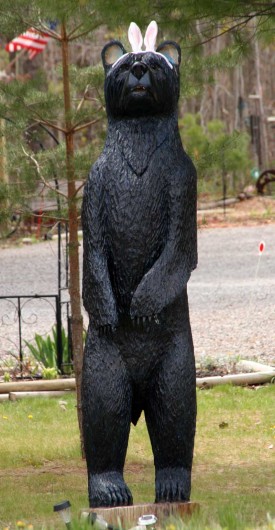 The sunrise side tour of public folk art closes with this gem from a colorful gift shop in Harrisville. I call it Moose With Purple Antlers. Setting him off against that bright orange wall makes it basically perfect. 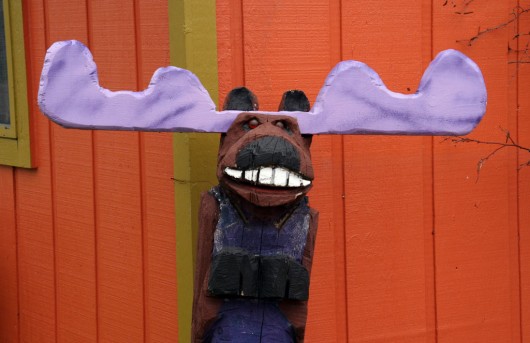 I love the sunrise side. No kidding. This place is so much more real and so much more fun and feels so much better than toney art galleries on Michigan’s sunset side.