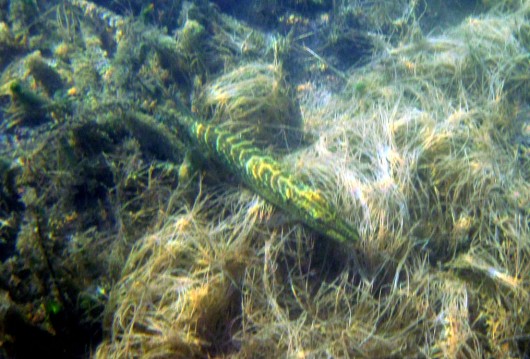 She, probably a she, was hiding in plain view. This Northern Pike was about 15 inches long and didn’t quite have the hang of the hiding and pouncing thing, which is the way pike forage for food. Still, she blended in quite nicely. That’s sunshine reflecting off the pike, but younger fish like this one do tend to have more yellow coloration than their elders and it’s arranged almost in stripes.

Ms. “Snotrocket”–an uncouth (but apt) nickname derived from the slimy mucous layer on a pike’s skin–sat still for several minutes in about 18 inches of water while we paddled about.

Steve took this photo with an underwater camera a few weeks ago. The weeds in Ghost Bay were still acting like it was winter. They were all huddled on the bottom of the bay. That didn’t leave much cover for a pike.

Where’s a young pike to find safety waiting for brunch this time of year? An osprey or an eagle could have snatched her easily. And, on that brunch thing, pike prefer to eat food that is one-third to one-half their size. Impressive.