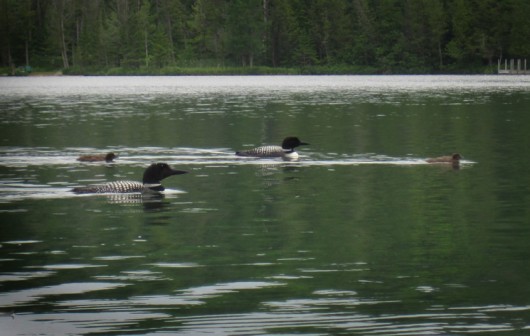 In 2009, no Long Lake Loons nested successfully. At least one pair, and it seemed a few  unpaired adults, summered on the lake. But no chicks. Two couples got a bit of an early start this year on their nests. Male and female alternate sitting on the eggs.  By June 25th, this pair’s two chicks had hatched and they were off their parents’ backs. (They only get to hitch a ride for about a week.)  The chicks were already diving for food, though I didn’t see them catch anything. They were “viewing” just like their parents–putting their heads into the water and peering around looking for tasty bits. Their loony foot waggle is already perfected. This family group paddled by my kayak, accepting my presence without any sign of stress or agitation. They came so close I could hear the chicks cooing. There is something so compelling about these creatures.

A second pair seems to be sticking to the bigger north section of the lake. Their nest was probably the one on the west side of Belly Button Island. There were two eggs in that nest, but only one chick survived. Unlike the family group to the south, the pair with one chick is acting very wary. The mother and chick still came quite close to our dock, though. The  male is yodeling off intruders and repeatedly going into “vulture pose,” where he pulls himself up out of the water and makes himself look more fierce.

Good. They need to keep that one chick safe. There are big snapping turtles, pike, and hungry Bald Eagles on Long Lake.

We need to keep the loons safe too.  One easy thing we can do?  They all eat little rocks from the lake bottom to aid digestion. But if a loon eats a lead fishing sinker instead of a rock, they are toast.  They die of lead poisoning.  There can’t be a better reason to get the lead out, anglers!

May all three chicks make it to their October adolescence. 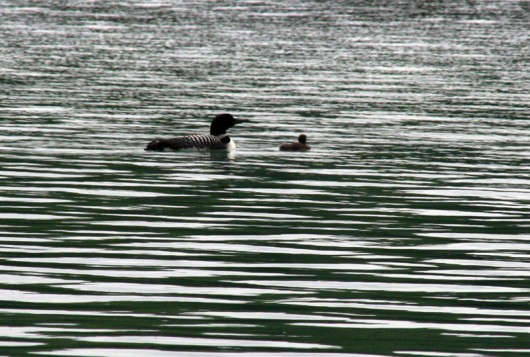