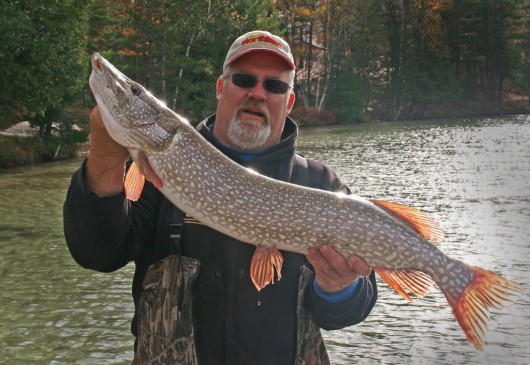 We do not catch fish like this on Long Lake. Other people catch fish like this on Long Lake. If we catch a fish it’s a teeny one. And we hardly ever catch even a teeny one. Of course, we don’t fish in the dedicated way that Jeff does. Jeff and his Great Dane were out on the lake when it was 40 degrees and the wind was blowing and fierce rain squalls were moving through the area.

This is the Northern Pike (Esox Lucius) that Jeff caught near the drop-off pretty much straight off from our dock on Friday October 24th. I saw him pull this fish out of the water as I sat knitting  and warming myself by the fire.  And, in case Jeff’s brother is reading this, this blogger, being first duly sworn, states that she personally measured this fish and it was 38 inches long. If I saw this pike swim by my kayak, I’d be hoping he wouldn’t eat my paddle. If I saw this pike swim by when I was swimming in the lake, I wouldn’t swim in the lake anymore. In fact, just knowing she’s in the lake (most big pikes are female) will make me think twice about dangling my feet off the dock next summer. Jeff released her right after this photo was taken and she swam away lickety-split.

The Northern Pike has a lot of goofy nicknames. Mr. Toothy is one and if an angler reaches in to that mouth to remove a hook, he finds out why. Wikipedia reports another nickname that captures the same quality: Sharptooth McGraw. But my personal fav is snot rocket. If you’ve seen a pike dart away you  know about the rocket part. And the snot part is the slime that covers the pike. It is a protective coating. Careful anglers make sure they don’t handle the fish any more than is absolutely necessary, not because they are squeamish (as I am) but because healthy pike need their mucous coating to avoid skin damage that can lead to death-by-infection.

The other angler on board is Jeff’s 2-year old Great Dane. What a great day to be a dog on Long Lake. 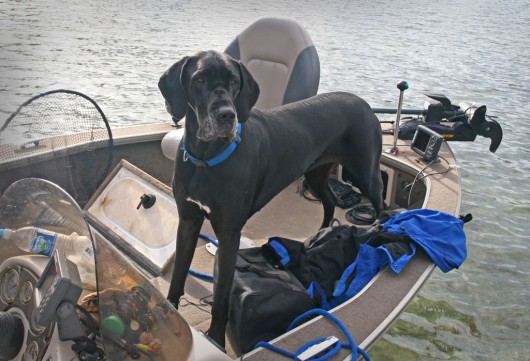 4 thoughts on “The pike we didn’t catch”