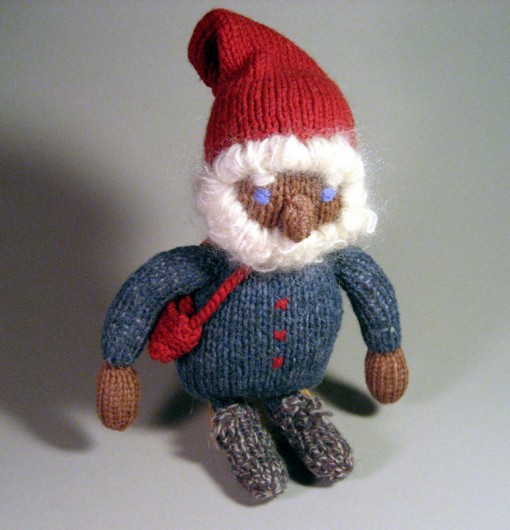 A Tomten is a Swedish character that has stuff to do all year round, not just at Christmas. But my tomten trots out every Christmas season anyway. Kind of like a troll or a gnome or maybe an elf.

Of course, just having knitted one doesn’t make me some kind of expert on tomtens. Neither does reading what the self-appointed tomten experts of the world have to say about them on Wikipedia.Those experts report that this guy is really a tomte. Despite a tomte’s small size, he has great strength. His eyes glow in the dark. But maybe they don’t. It seems they only come in the boy variety. Nothing is said about any tomtesses. A tomte protects farmers’ homes. And apparently he’s a little prickly about the out buildings.  A tomte is rather easily offended and will retaliate if someone urinates in the barn. I guess cows and horses urinating in the barn is OK, but not people, which makes every kind of sense. A tomte’s favorite food is porridge with a little pat of butter on the top, especially on Christmas Eve.

This tomten is a Susan Weir pattern. He was a hoot to knit. Great nose. Good feet.

Best wishes for a close-knit holiday season. And no urinating in your barns (or behind your sheds or garages) or else the tomtens will give you a sound thrashing. 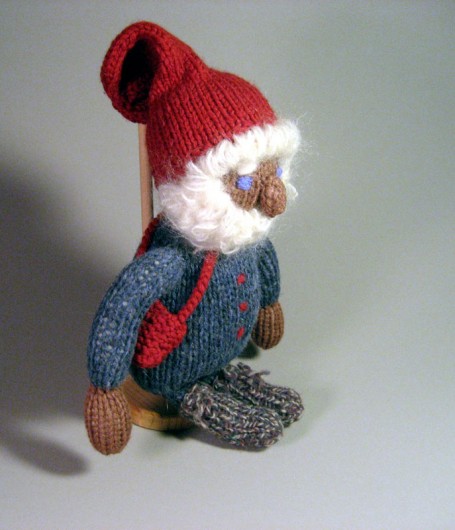