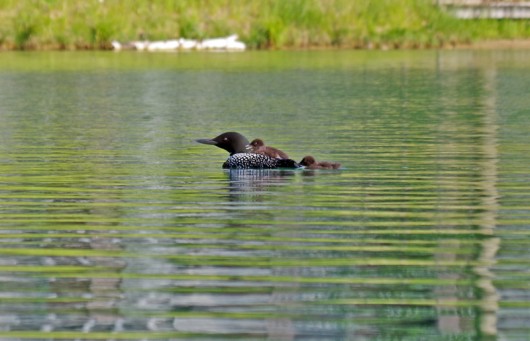 On Saturday morning, June 15th, one loon was on the nest tucked near the water on the west side of Belly Button Island. On June 16th, Father’s Day, we saw tiny brown puffs riding on a parent’s back. We weren’t sure if there was one chick or two.

This is the scene near the entrance to Ghost Bay one week later on June 23rd. One of the twins is the back seat driver and the other is trailing behind. We watched the chicks “viewing” underwater, with their heads nearly submerged. They’re learning to fish already. The second parent flew in a few minutes after this photo was taken. For a loon, he made an exceptional landing. Showing off for the kids, I guess. There was not the usual hard braking and skidding and splashing.

OK Long-lakers. We need to watch out for this little family during the upcoming 4th of July activities on the lake. Last year we lost one chick, somehow–maybe to a Bald Eagle or big snapping turtle or illness (and hopefully not a power boat). Let’s keep our fingers crossed that these two make it to their October loony adolescence.

Please also keep our fishing lines free of lead sinkers. The sinkers, especially split-shot, can easily end up on the lake bottom. Loons need to eat small pebbles from the lake bottom to aid their digestion. But if loons eat lead instead, it doesn’t take much for them to die of lead poisoning.

As of this past weekend, no sign that the second nest has been successful yet. The second pair is nesting in the lower lake, on the tiny island on the west side.