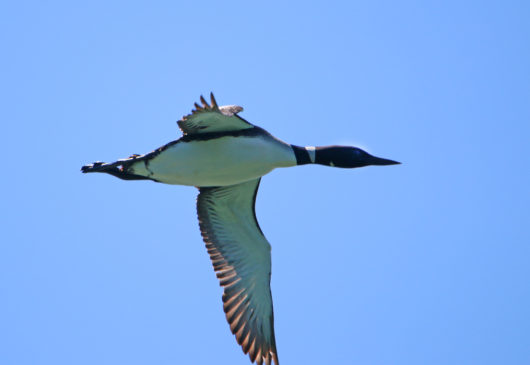 We aren’t going to have any loon chicks this year on the lake. But we have loons-in-residence and from time to time we’re the party lake this summer. Loons occasionally gather in social groups. We hear them flying in, sounding their loony-tunes flight calls. We see them doing their skittering chasing about.

The underside of a loon is always a surprise. Even when you know their beautiful plumage is topside only, that white underbelly still seems sort of unfinished. Like the black magic marker ran out of ink.

See how the loon has its feet crossed in flight, as if at the ankle?  I’m thinking that must help it to deal efficiently with wind resistance. If loons did all that foot waggling and scratching in the air that they do in the water, they’d probably fall like a rock.

Here’s a beauty of a definitely different sort. 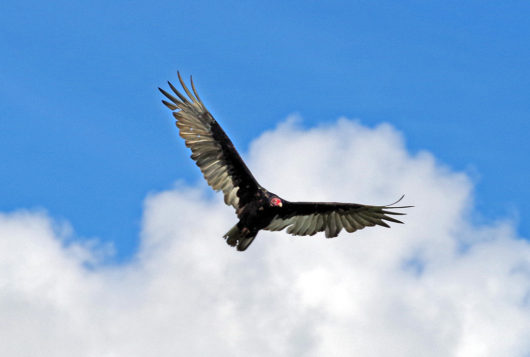 The Turkey Vulture. We see them circling in kettles that can number a few dozen individuals. But they don’t always travel in packs. This guy was a loner. Its fanned-out wing tips are a dead giveaway. Also, if you see a bird swooping down to something dead and smelly that’s pretty much a giveaway too. Oh yes, there’s that red head, all nicely defeathered so the bird can pick at carcasses and not have to do much grooming. There’s no mistaking that red head.

This fellow, cruising high over Long Lake, is a Great Blue Heron. 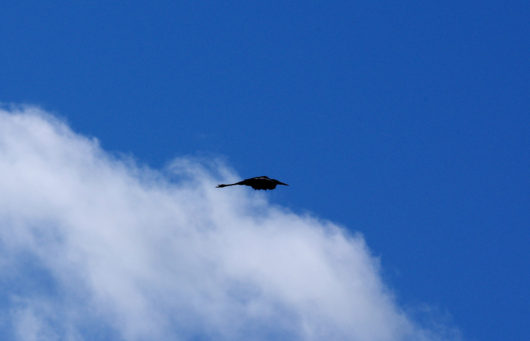 Great Blues fly with deep, strong beats of their very wide wings. But from ground level, it’s the long trailing legs that tell you best what’s up . When Great Blues fly, they pretty much fold their necks into sort of an “s” shape. So, look for long legs, long beak, but you won’t really see a long neck. And if you’re suddenly being reminded that all birds are descendants of dinosaurs, you’re probably looking at a Great Blue Heron. These guys may set you to wondering if the dinosaurs are still extinct.

Here’s one everyone knows, the Bald Eagle. 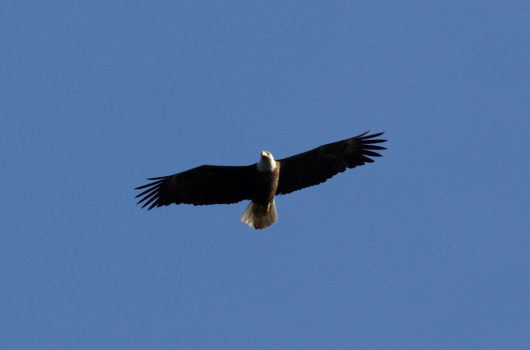 If Bald Eagles are flying high, they are more likely to be gliding than riding a thermal up in a spiral as a vulture does. On Long Lake the eagles often fly low over the tree lines. Their wing tips fan out, but not so exaggeratedly as a vulture’s. And unless the bird is very high or very backlit, the white head and yellow beak is the giveaway.

4 thoughts on “What’s up on Long Lake”