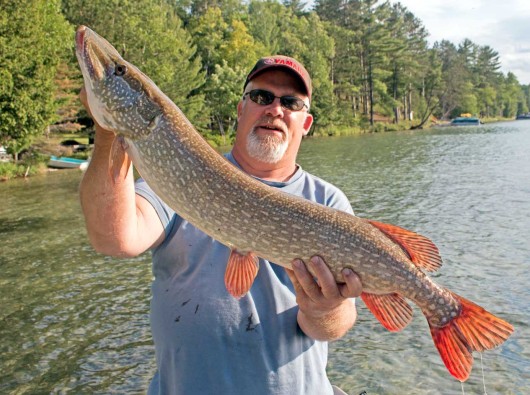 I know. My “Jeff and His Giant Pike” stories are maybe starting to rub salt in your wounds. For those of us who can’t catch anything, including me, we are envious but trying to pretend we’re not. First it’s Jeff’s 38 inch Pike in October of 2013. Then it’s his 33 inch Pike last September. But now? Now it’s a Pike too large to measure by anything we had handy. It’s way bigger than the 36 inch yardstick Jeff had in his boat. Steve, who did not catch this fish (so he can be trusted), says this Pike was 42 inches long.

Jeff is a catch-and-release Pike fisherman, so I started wondering if this could be the same fish he caught before. Jeff’s 2013 monster catch is photographed, below. I tried to find out how fast Pike grow. I didn’t get far with that. My question was whether one could grow 4 inches in about a year and a half. The result of my research suggests a nothing-definitive maybe-yes. Four inches longer. Clearly heavier, with a greater circumference. The same lovely burnt-orange fins. But I’ve decided this is not the same fish. The patterning looks subtly different.

I was probably just hoping there’s only one fish this monstrously sized in Long Lake because I don’t like the thought of this fish, and those sharp teeth, watching kids floating around in their tubes and my toes dangling off the dock. 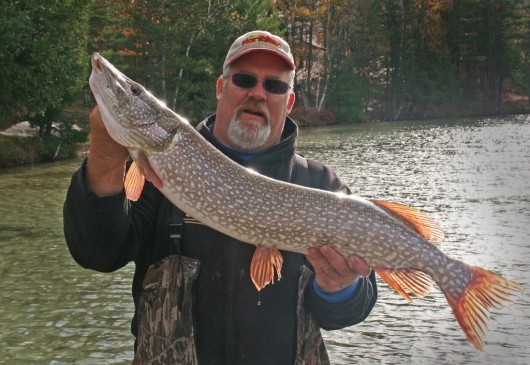 One thing? We can now call Jeff “Master Angler Jeff.”  According to the DNR, a Pike achieves “Master Angler” status when it reaches 40 inches (or 18 pounds). That also usually means it’s female and more than 10 years old.