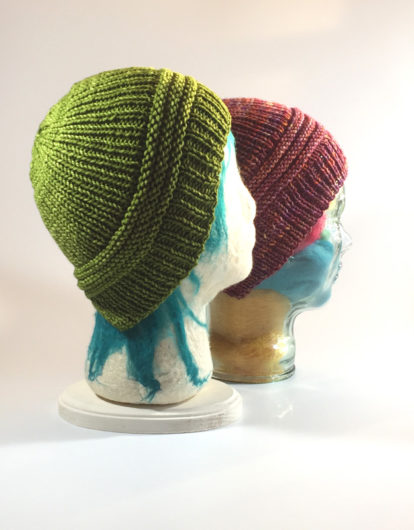 Recently I’ve been fascinated with knitting doubles. I’m enjoying how the same pattern works up in different colorways or in different yarns. You’re looking at Alex Tinsley’s Fructose. I’ve knit both my Fructoses in Malabrigo Rios. These two colorways are big favorites of mine. The green one is lettuce. OK, you’d have figured out that’s the green one. And the purple/orange/red is Archangel. Beats me why. But it’s a wonderful colorway, especially for one-skein projects. That’s because there seem to be very big differences between skeins. But every skein I’ve seen is wonderful. 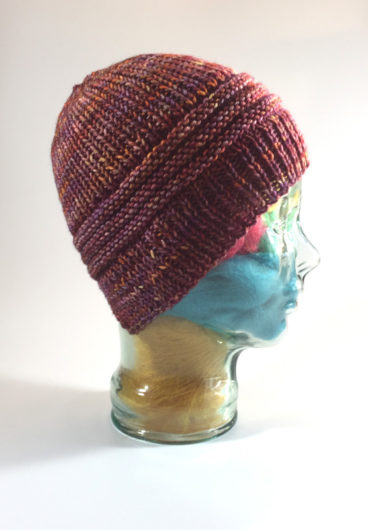 The strong vertical lines combine with strong horizontal ones to give the hat wonderful structure. And the sweet bonnet-like slit in the back leaves room for a pony tail or allows the hat to be worn low on the back of the neck to keep out winter’s chill. 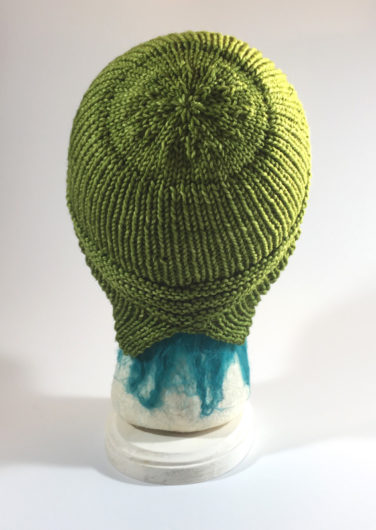 Each Fructose took 52 grams. I should have had 48 grams left. But both my skeins were “light.” I’ve read that a skein with 10% more or 10% less is considered acceptable. I suppose I should be magnanimous and accept that if sometimes I get more I shouldn’t grouse about getting less. Maybe I would if I ever got more than a dollop of yarn beyond the ballband amount.   Both these skeins were shy about 8 grams.

With my mission of not wasting yarn or leaving it to languish in my oddments bags, I decided to knit up a pair of toddler-sized The Thinker hats. 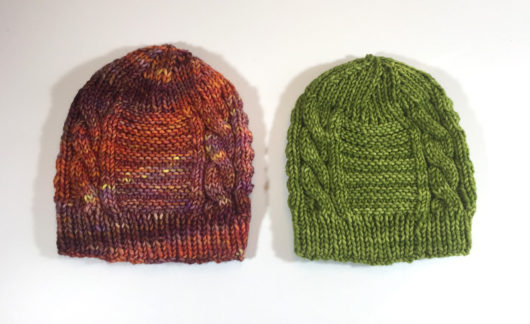 Susan Villas Lewis has come up with such an excellent all-sized pattern. These are the 8th and 9th Thinkers I’ve knitted. In the toddler size, there are three lines of easy cable that ring this hat. 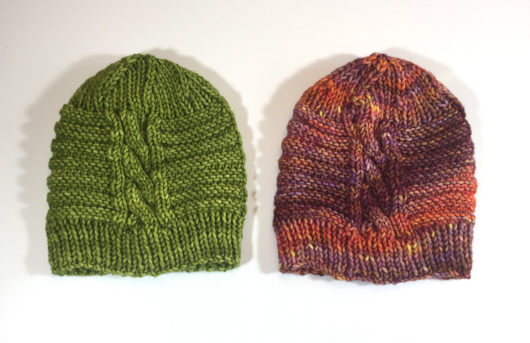 It’s a seriously excellent use of yarn.

That’s also true of Clara Parkes Hill Country Hat. Hill Country is a bulky-weight freebie available on Ravelry. It’s also included in Parkes’ excellent book The Knitter’s Book of Wool. Hill Country is another pattern I return to whenever I have about 110 yards of bulky asking to be knit up. This brown one is knit of Brown Sheep’s Lamb’s Pride Bulky. 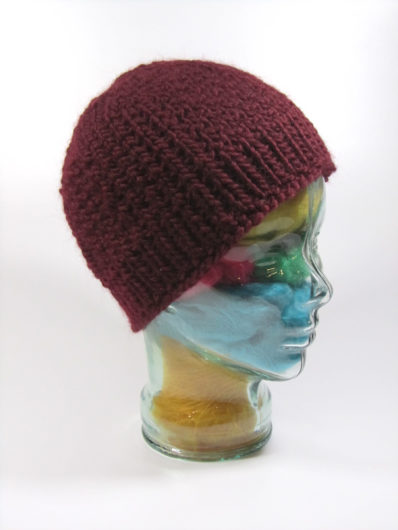 One of the strengths of the hat is that, depending on the yarn and sometimes the colorway, it’s a definite unisex design. This white one is knit in Valley Yarn’s Berkshire Bulky. 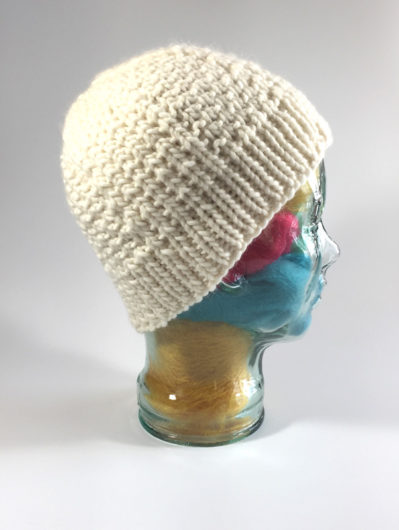 As ever, hats don’t get beyond first base with me if they don’t have well-behaved crowns. Plus they get extra points if, like Hill Country, they have something interesting going on in the crown section. I think this swirl works well. 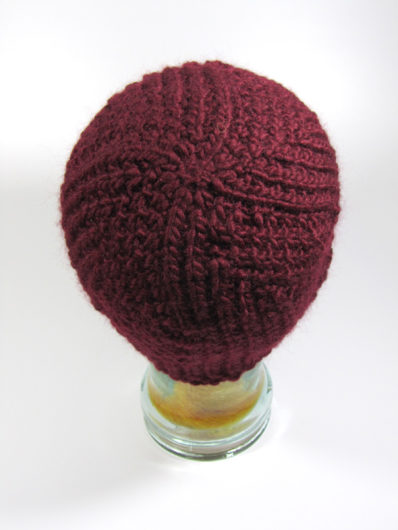 I knit this next pair quite awhile ago and didn’t get around to showing them off. This is Elena Nodel’s bulky-weight freebie, Tega. An excellent pattern. It’s only available in one size, adult, but that’s easily adjustable by using a less beefy yarn weight and smaller needles.

My first Tega is knit in Reynold’s Lopi Bulky. I used size 6 for the ribbing (that was pushing it) and size 9 for the body of the hat. Those extravagant cables are wonderful. And the thoughtfully planned crown is a winner for sure. 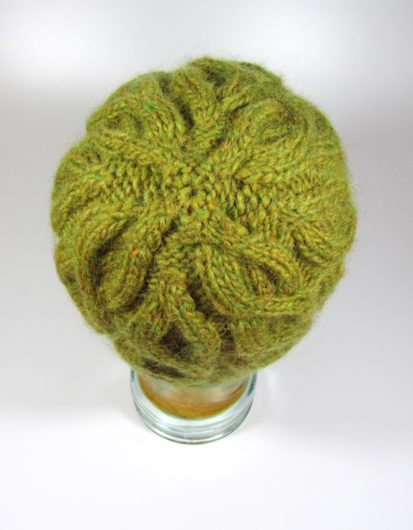 As for what head will wear a bulky-weight Lopi hat, it needs to be a very cold one. And a head with a very high “but it’s scratchy” threshold. I washed it in Eucalan to try to tame the itch factor, but not with much success. It’s much softer but still scratchy as heck. And I actually have a high tolerance for such rustic yarn.

If you decide to knit Tega in a good superwash bulky, like this Valley Yarns Superwash, there won’t be any complaints about itchy heads. The yarn also has great stitch definition for a bulky, which is a big plus for this pattern. 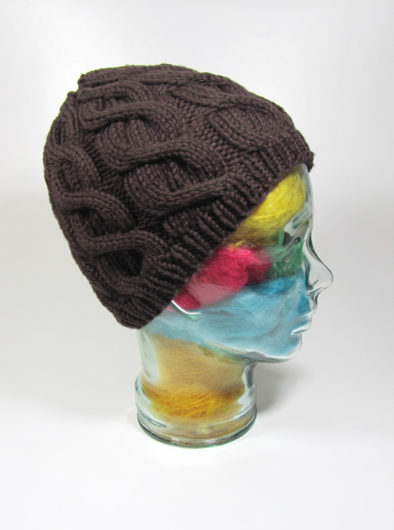 At some point, I promise, I’ll stop concentrating so much on heads and will let your eyeballs feast on something else. Not today though. I recently hatched plans for how my knit hats can tempt teens to put something on their heads and, with that, my hat knitting went into high gear. Even Glasshead is beginning to voice boredom with all these hats.

This one is Agnes Kutas-Keresztes’s freebie, Christian. My gray Christian is knit in about 130 yards of Berroco UltraWool. 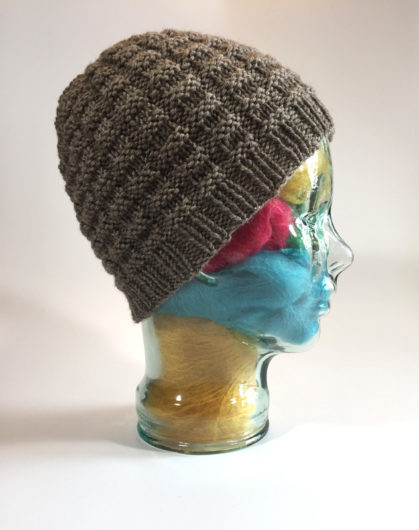 And this pink one is knit in Plymouth Encore. 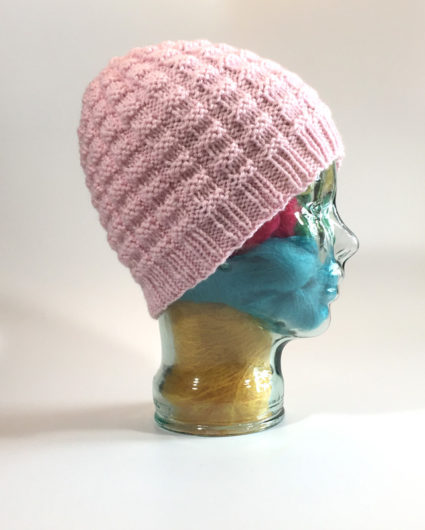 Crowns can make or break a hat. Check out this wonderfully organic one. If you’re up for an easy, rewarding (and free) pattern, definitely consider Christian. 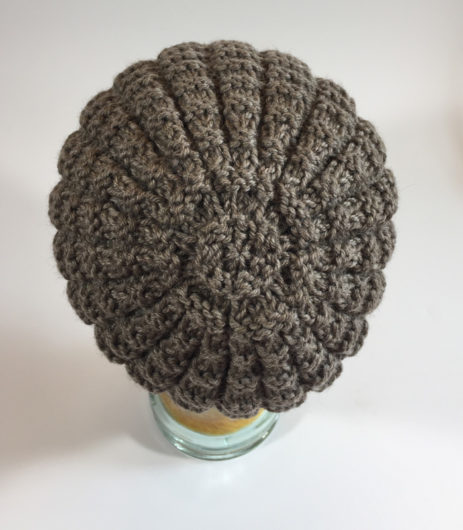 Just when you think I can’t possibly be assaulting you with any more hat twins, I’ve still got more. This set is Susan Mills Harriet. Quite uncharacteristically, I knit my Harriets in exactly the yarn the pattern calls for: Classic Elite’s Liberty Wool. 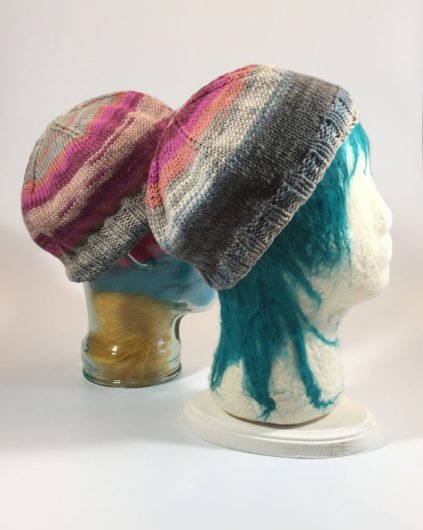 The multi-color Liberty Wool means that every Harriet will be unique. My 50 gram balls weighed closer to 40 grams, which was a disappointment. But two balls still ended up with two Harriets, just one large and one medium. 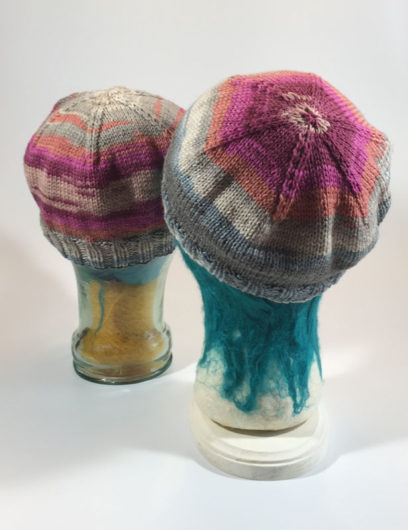 The hat is meant to be a beret. But I think most heads would want to wear it as a beanie. 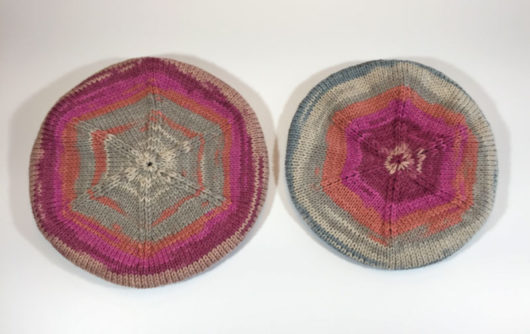 I made some sizing modifications on this next pair of hats, but I am totally liking the look. It’s Benjamin Matthew’s On the Grid Beanie. I was lucky enough to secure a copy of the pattern during its few days when Matthew released it free. But this hat pattern is totally worth the 6 dollars he’s charging for it now. By the way, to keep an eye on designer short-term freebies, join the Free Stuff Rocks (f/k/a Lovin’ the Freebies) group on Ravelry. The group forum will also alert you to new forever free patterns and to discounts that are available from designers.

Back to On the Grid. Both mine are knit in Plymouth Encore. The pattern calls for a more lightweight worsted and 19 stitches to 4 inches using garter stitch as the gauge. Encore required some sizing mods. 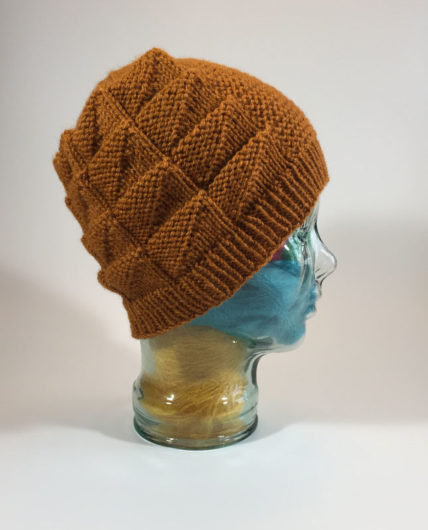 I knit 10 rows of ribbing. In Encore, needle size 6, that was about 1.5 inches. I knit 4 repeats of the triangle pattern instead of 5, which gave me a bit over 6 inches of triangles. From the start of the decreases to the top added about 2.75 inches. So, even modified, this is quite a long beanie–9.25 inches. But I can already tell that this quick knit is a pattern I’ll return to regularly.

You know that means it’s got an interesting crown. 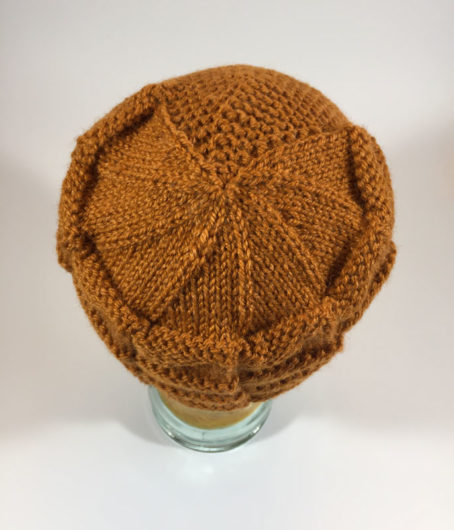 GlassHead is weeping. Maybe you can hear her? Both Fructose have already been given away and she wanted to hang on to the Lettuce one and keep wearing it for awhile. I’m consoling her at present with the Encore Sour Apple On the Grid, a similar colored hat. 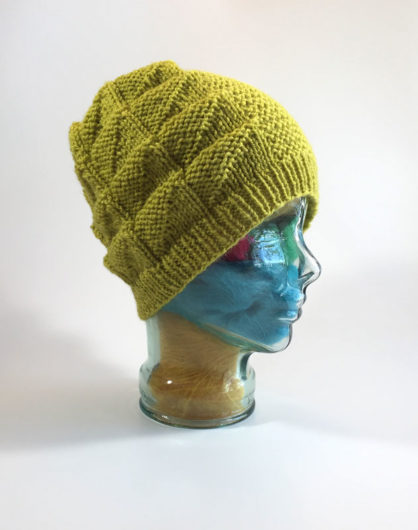