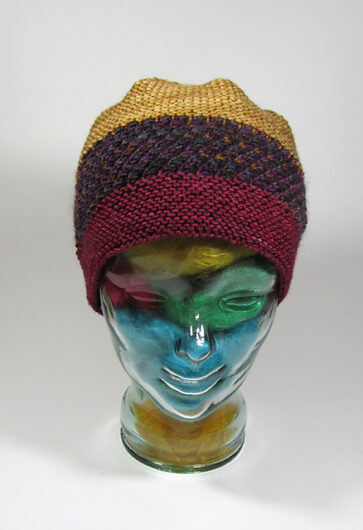 This story starts here, with Aimee Alexander’s design: Hungry Horse. Kind of anyway. I knit this hat in Alexander’s test knit of the pattern way back in June of 2017. That’s Anzula Cricket in the Bark colorway at the crown. Shalimar’s Breathless DK is the wine color. And Mountain Colors Mountain Goat is in the middle. Cricket is 10% cashmere. Breathless is 15% cashmere and 10% silk. Mountain Goat pretty obviously by its name is more than half (55%) goat mohair.

I gave my daughter-by-marriage this hat fairly soon after I finished it. It became her favorite favorite hat. A few years ago she told me that and asked me to make her another. I was thrilled to oblige. This time she even picked out the colors. 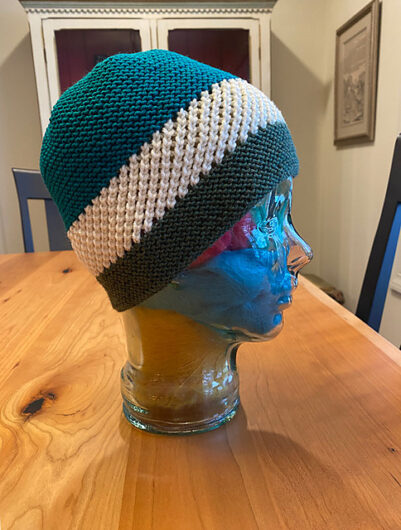 I knit the 2020 version in Plymouth Yarns Merino Superwash DK. We all thought it quite pretty. I think, over the long haul, it hasn’t rated the same cudos as the original.

My dear DILl let me know a bit ago that her original Hungry Horse was no more. Some thief came by dead of night and stole that hat. What a stinker. Well, maybe it was lost. No matter. She’d really like another one and could it be in the same yarn as the original? Her request and a bit of research on Ravelry to remind myself what yarn I used originally and it dawned on me what probably made that original hat so special: the feel of the cashmere. I recalled the first time I knit with yarn containing cashmere–and it wasn’t all that long ago in my 60 years plus of knitting–it was just the best.

I was too much of a skinflint to buy another skein of Cricket when I needed only about 80 yards to reproduce that Hungry Horse crown. What is a skinflint anyway, in addition to me? The term originated in the 1600’s. A skinflint is so miserly they’ll even “skin” a bit of flint to sell. Flint is a hard substance and skinning some off would take a ton of effort. Plus it’s super plentiful and clearly not worth the effort.

This skinflint had a really nice cowl among my personal wearables: Stephanie Tallent’s Chinle Cowl. It’s a great pattern and this one was the 5th I’d knit. “Had” and “was” are the operative words. 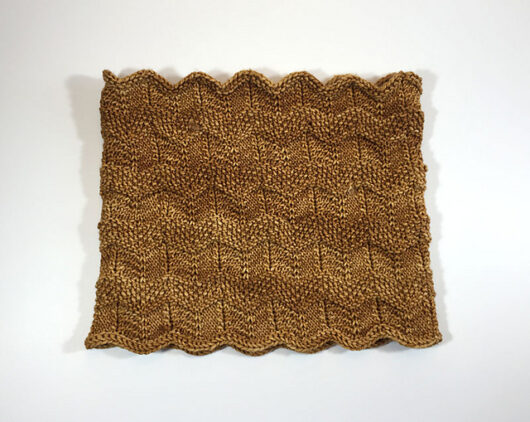 I decided to unravel Chinle and reuse the yarn. I didn’t wash or steam the unravelled yarn. Washing would come later. 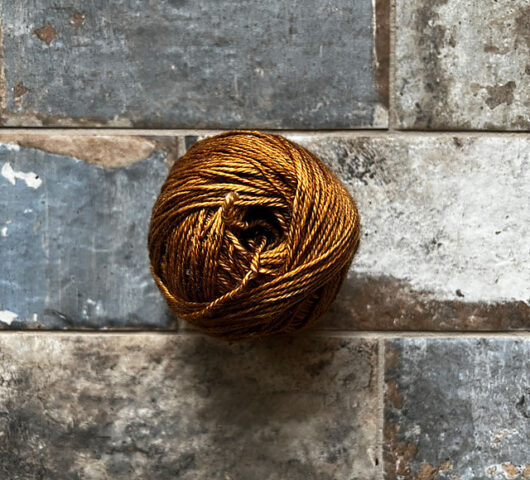 Shalimar Breathless was discontinued quite a few years ago. And even if I could find some it’s another one of those mortgage-worthy yarns. But, again among my personal knits, was MeijuK-P’s Summa Stripes Shawl. Such a pretty small shawl. I did wear this one since finishing it in January of 2017. A bit. Small shawl/scarves that need to be pinned to hold them in place have mostly had their day with me. This one’s been languishing. 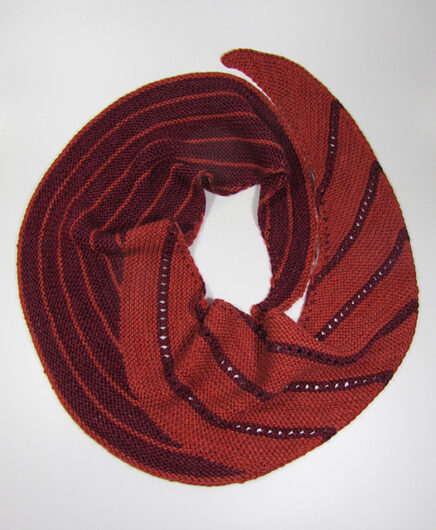 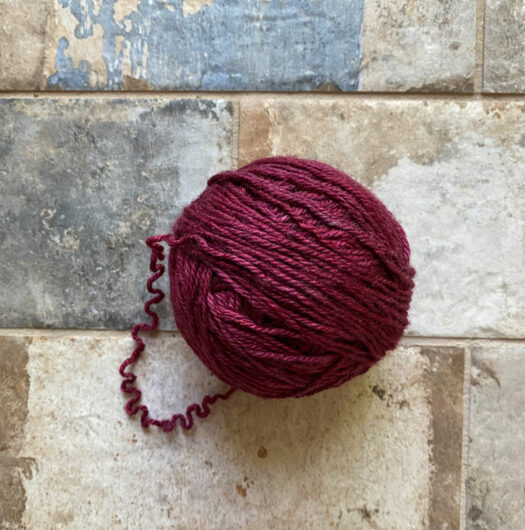 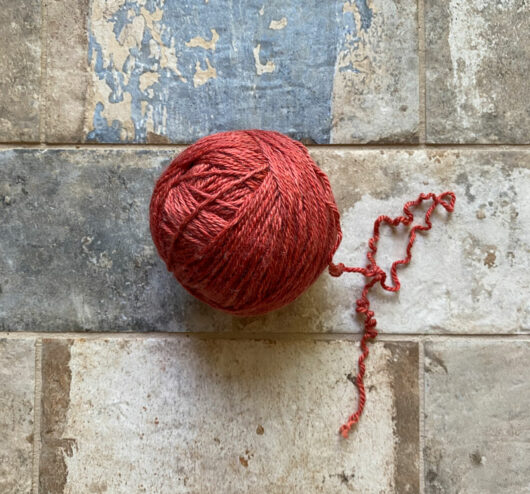 One more yarn to go. I needed some Mountain Goat. 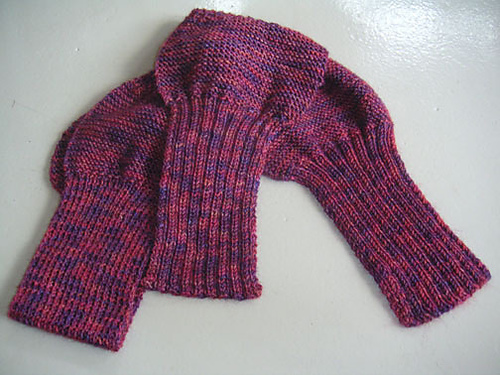 This scarf is Lion Brand’s old pattern Rib Sampler Scarf. It’s unfortunately no longer available on their website. And the Ravelry link leads only to a photo of the scarf (not the pattern) on the Wayback Machine. It’s a great little pattern and it looks very spiffy in Mountain Goat. But, again, I knit this version in 2009 and just wasn’t getting much use out of it. 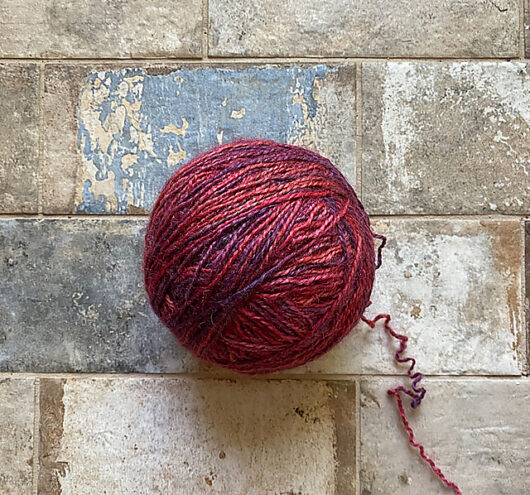 I knit Hungry Horse and then gave it a good soak in Eucalan wool wash. Then I put it on GlassHead and made Glass Head sit near one of the heat registers overnight. This first version doesn’t use any Mountain Goat. I went with cashmere content for all 3 sections. When I knit it again, and I did, I decided that the Chinese Waitress cast-on I used resulted in too much of a flare. Still, though, it’s an excellent hat that closely echoes the original. 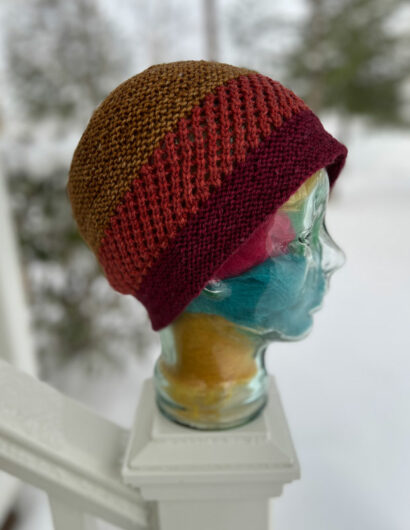 The second version duplicates the original. I used exactly the same yarns and even two of the same colorways. 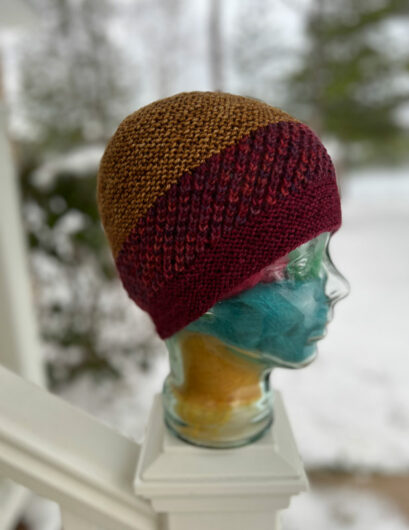 A simple long tail cast-on eliminated that bit of flare at the outset. Success!

As for the rest of the Mountain Goat? Here’s its second life. 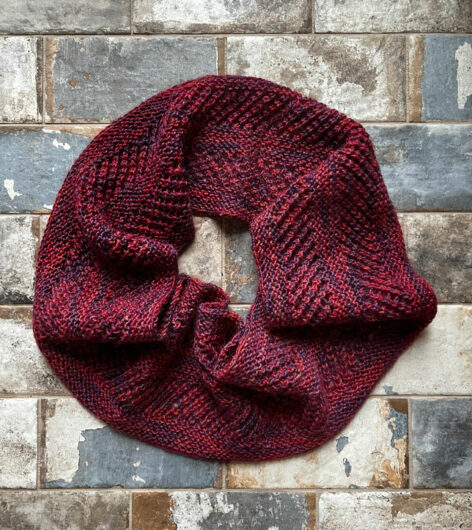 This is another Aimee Alexander pattern in the same series of horse-named patterns: Kicking Horse. The pattern calls for DK weight and Mountain Goat is a light worsted. The pattern also calls for three sections of the diagonal lace. I’d have been pushing it on the yardage, so I stopped after two repeats. I’m liking cowls more than scarves these days. This is a good one.

Unravelling yarn to knit something new out of old yarn proved a fun and frugal way to navigate through the knitting universe. I plan to do it again sometime soon.