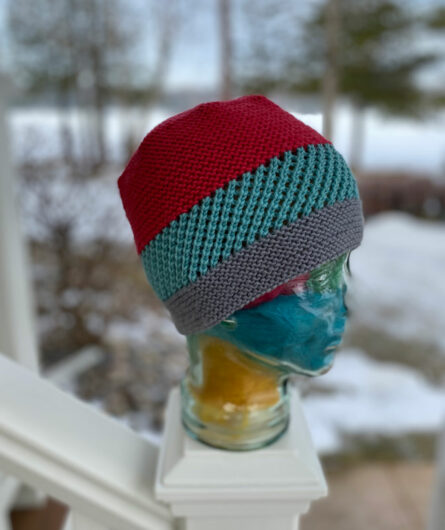 I’m still thinking cold weather. Weather wizards predict 94 today and it’s humid. And after I finish this post I believe I’ll head to the dock and dangle my feet in the water.

This first hat is one I’ve featured often on my blog. It’s Aimee Alexander’s Hungry Horse Hat. I’ve already made enough hay commenting that I think it’s a goofy name for a hat, no matter that Alexander lives in Whitefish, Montana. So I won’t go there today. Except I guess I sort of have. This time I knit the hat in 3 shades of Debbie Bliss Rialto DK. Rialto is a 100% merino and is next-to-the-skin soft. 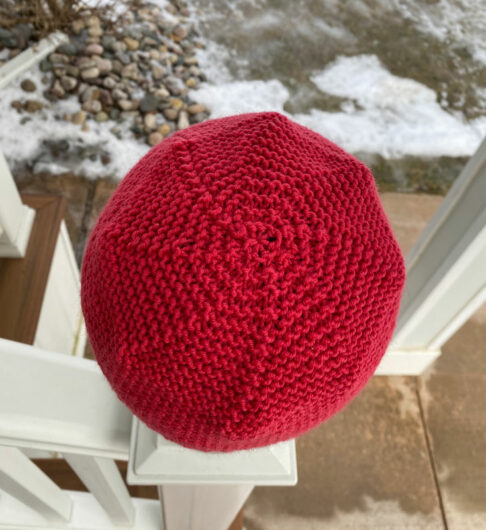 I used the same shades of Rialto DK for a second Hungry Horse. 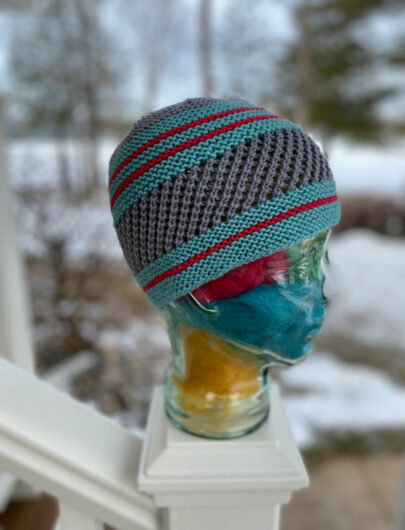 I didn’t have much of the red shade left, so I just worked a few stripes into the garter stitch sections. As always with my favorite hat patterns, this one has a nicely behaved crown decrease that ends without being pointy. 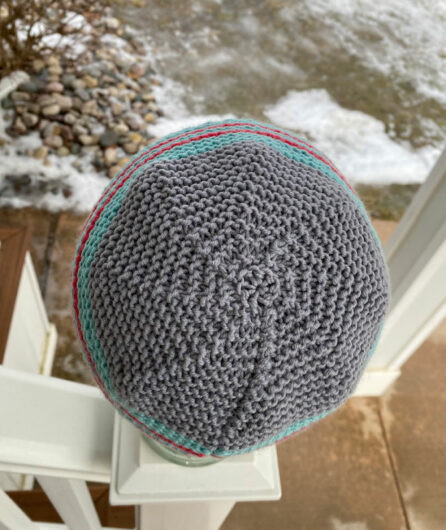 Next is a trek into the Ministry of Silly Hat Toppers. This next hat (minus the dangles) is an early version of Jacqueline Fee’s Three Rib Beret (minus the beret). Ravelry dates the pattern to 2009 and 2011, published in Piecework and Interweave Knits respectively. But I have a paper copy published in the Fall 1996 issue of Knitting Now, Vol. 1, #1. It is comforting for me to hope that I’m not the last knitter on the planet to recall that interesting publication. I believe it published 6 issues a year, possibly only for 2 years. One of the things I liked about Knitting Now–a black & white newspaper printed on good stock with a few color photos on an insert sheet–is that it supplied the backstory of many of its patterns. 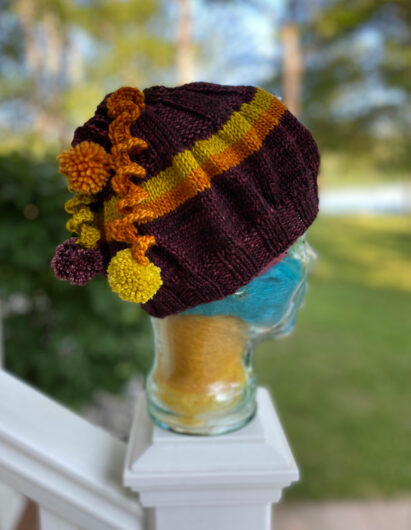 The article reports that an even earlier version of this hat appeared in the Fall, 1994 issue of SpinOff magazine.

I’m not sure why I don’t like berets, but I don’t. So I didn’t block the piece and just left it as a full beanie. At the top, instead of 3 little pompoms, I added the corkscrew dangles with a pompom on each dangle. I knit my not-a-beret in Malabrigo Rios, a worsted weight. 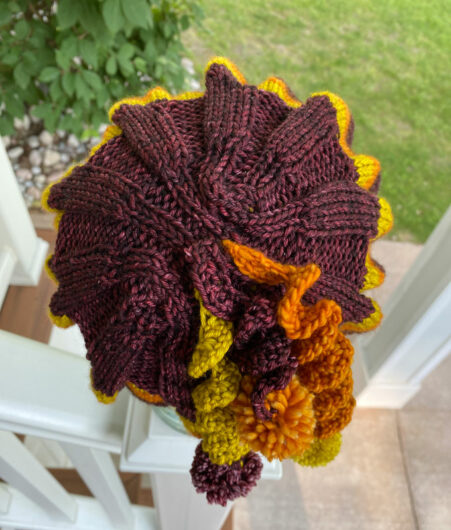 I grafted the top seam, using Kitchener, instead of doing the 3-needle bindoff the pattern called for. I made 3 corkscrews. For one I cast on 20, the next one I cast on 30, and then 40. I knit in the front and the back and the front again of each cast-on stitch. Next row, bind off in purl. And behold, 3 corkscrews.

The reference to “3-rib” is that the initial ribbing is 3 by 3, then 5 by 5, and at the end it’s 2 by 2. Where I added striping is stockinette, which is what the pattern calls for. It’s an interesting vintage pattern. My guess is that I’ll be looking at this one in my pick-your-gift stash for years to come. But then, as Elizabeth Zimmermann observed, the good thing about knitting hats is that some people will put almost anything on their head.

After such a silly hat, I should include a more sedate one. This is Asita Krebs Towards North Hat. I knit my version of this excellent Ravelry freebie in Berroco Ultra Wool, a worsted weight.

The pattern calls for an Aran weight yarn and an 80-stitch cast on for an adult-sized hat. I cast on 92 stitches in worsted weight and the hat fits a small adult head. It’s a fun pattern to work and even incorporates an easy Vikkel braid at the transition from the ribbing to the body of the hat. My understanding of a Vikkel braid is that it’s one knitted laterally. 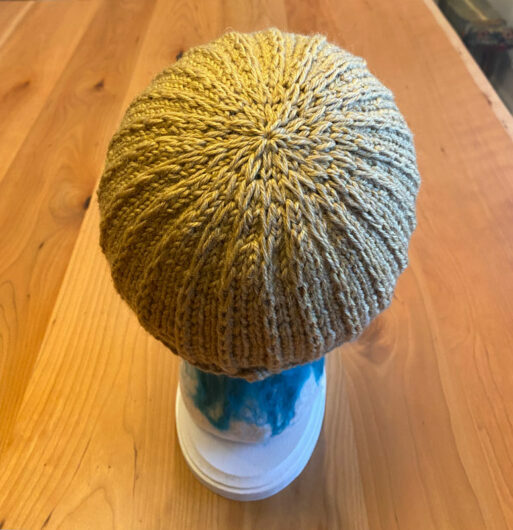 At first I thought that the crown decreases were a tad untidy. But I ended up changing my mind. It works. 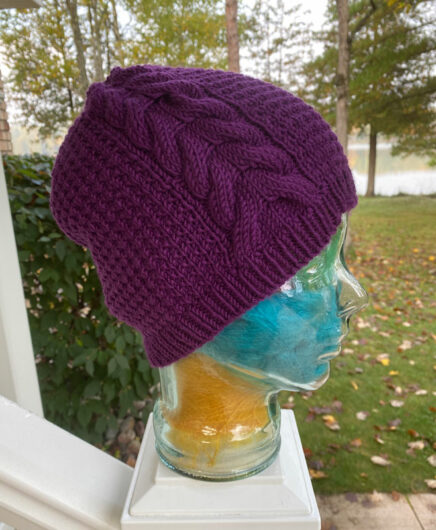 Molly has everything I like in a hat. Plenty of texture. A little slouch. And that great horseshoe cable on one side worked gracefully into the orderly crown decreases. 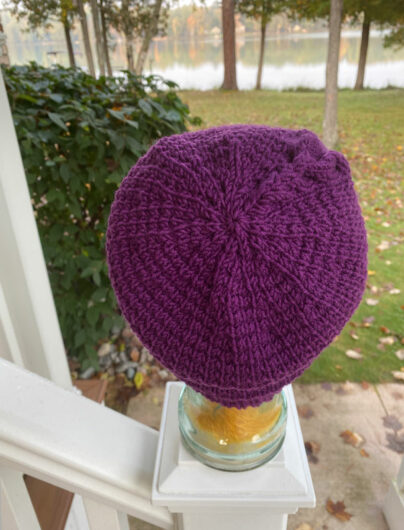 I knit mine in Plymouth Yarns Worsted Merino Superwash Solid. Molly’s a yarneater and my version needed 201 yards (92 grams). Good golly Miss Molly, this one’s worth your time.

Now, for some time dangling my feet in the lake. 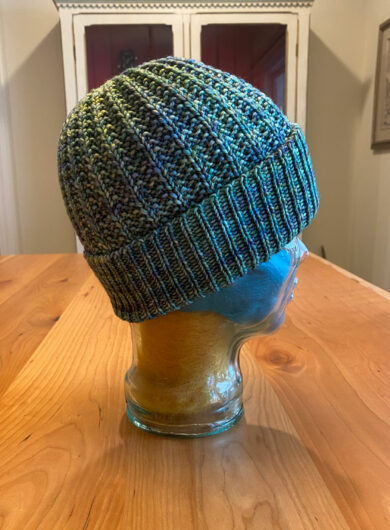 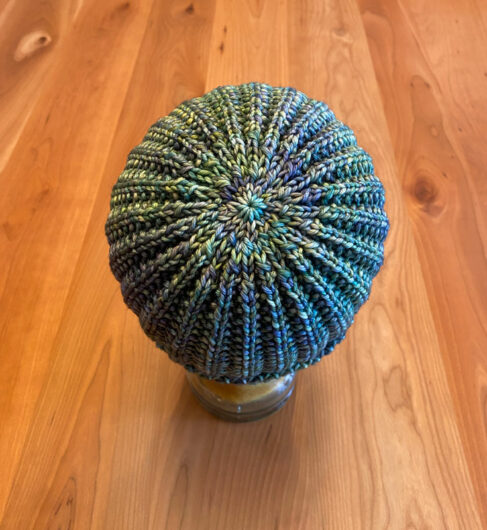 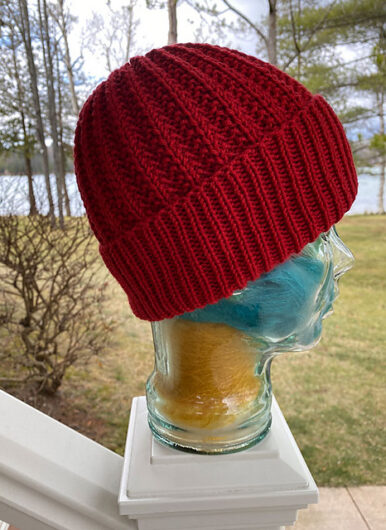 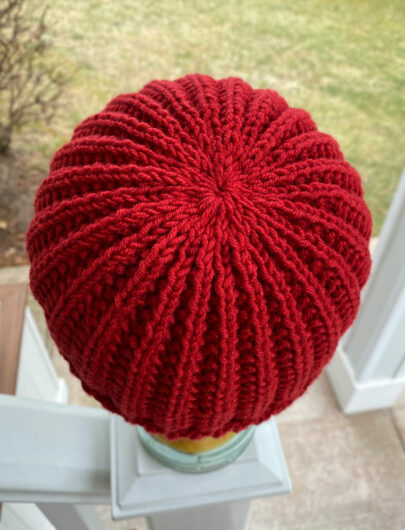 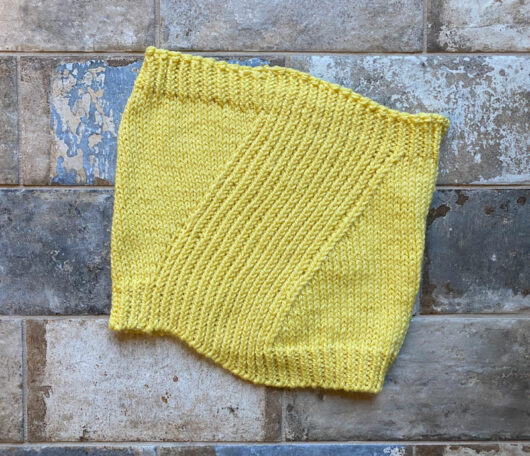 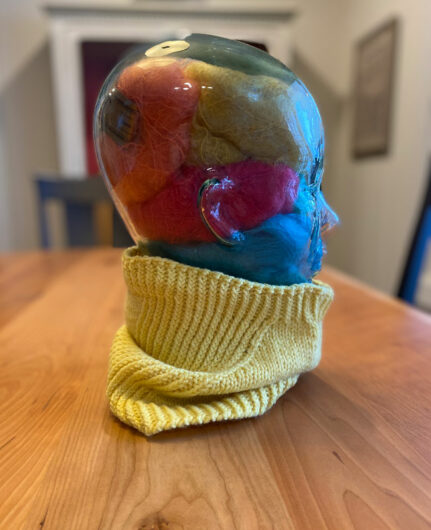 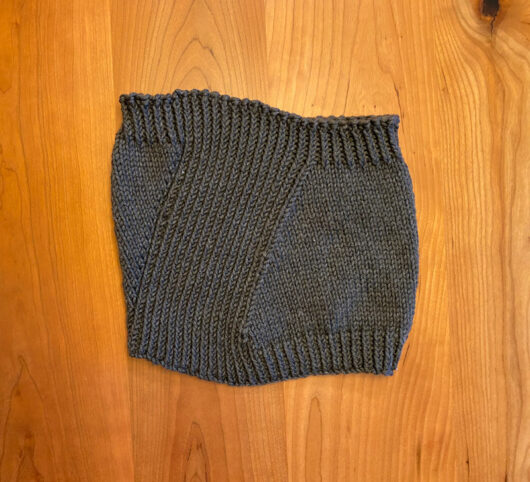 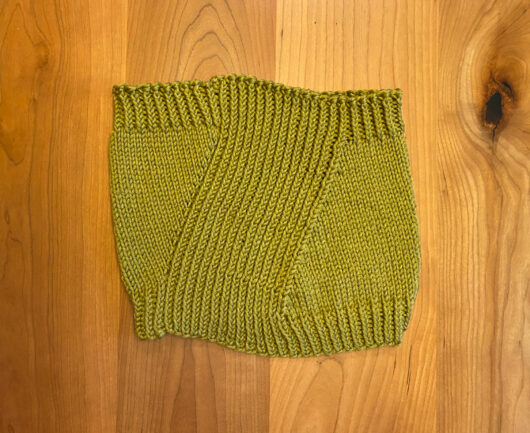 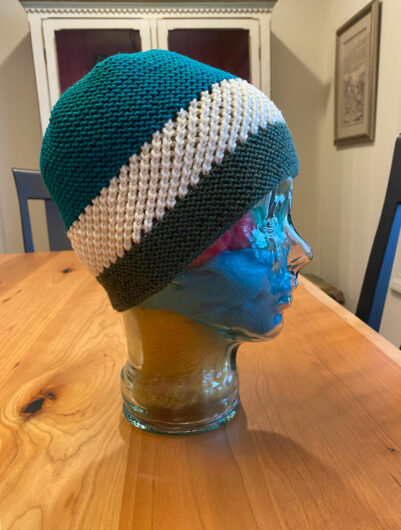 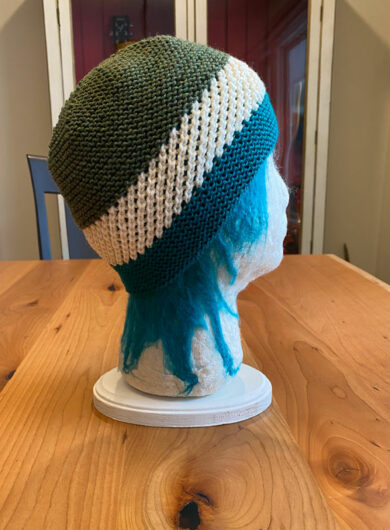 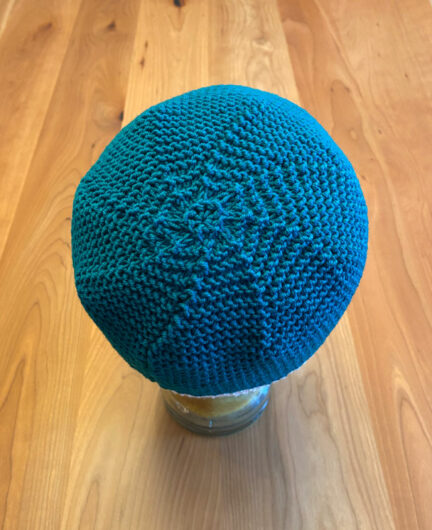 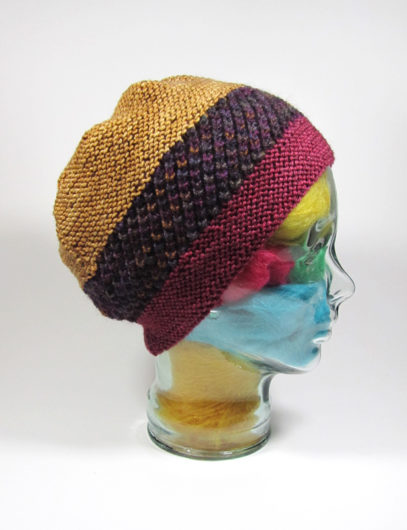 The lake hasn’t frozen yet, though it’s getting close. On cold mornings there’s a skin of ice extending out from the shore. And the foam that the winds froth up is sort of smoothie texture. Without a hat, ears will soon be feeling pretty frozen.

This hat is “Hungry Horse Hat” a newer DK-weight pattern from Aimee Alexander of Polka Dot Sheep. I don’t know the origin of the pattern name. But I still know that I like the hat. It’s an interesting mix of garter stitch and mesh, designed to be tri-color.

Here’s a look at its well-behaved crown. 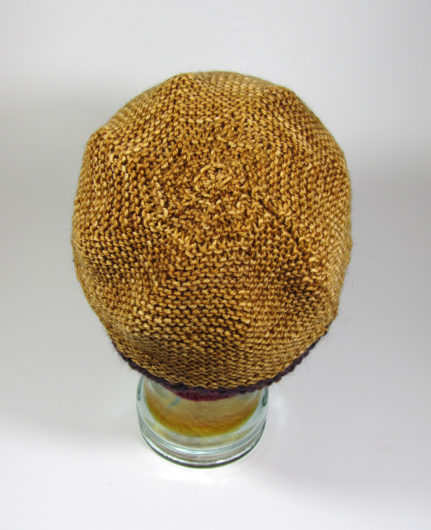 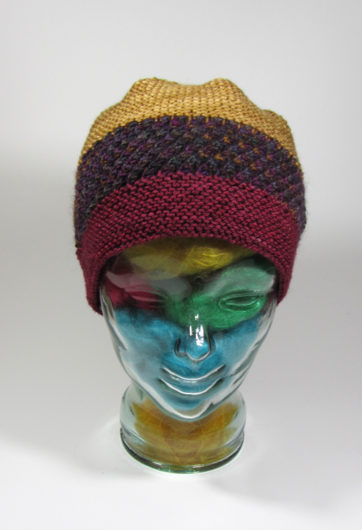 My Hungry Horse is a mix of critters-of-origin. The gold is Anzula Cricket, 80% merino sheep, 10 percent cashmere goat, and 10 percent nylon chemistry lab. The mesh section is Mountain Goat by Mountain Colors, described on the Mountain Colors’s site and on Ravelry as 50% merino and 45% mohair (which is where the goat comes in). Apparently it’s 5% unidentified something else. And the earband is Shalimar Yarns Breathless DK. Breathless is 75% merino, 15% cashmere goat, and 10% silk. I hesitated before mixing and matching yarns, but I was trying to get a proper color scheme. I’m completely pleased with the outcome. I guess it wouldn’t be too good a hat to test a person’s fiber allergies, though. If your head itches, you could be allergic to just about anything. 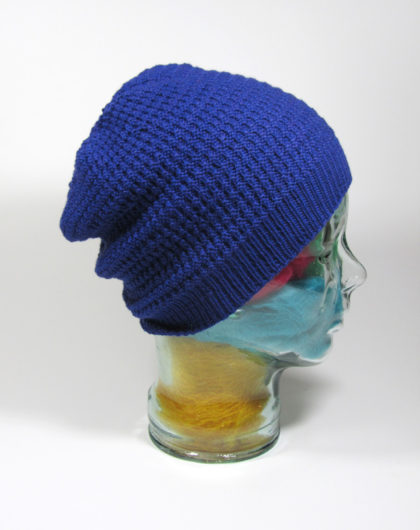 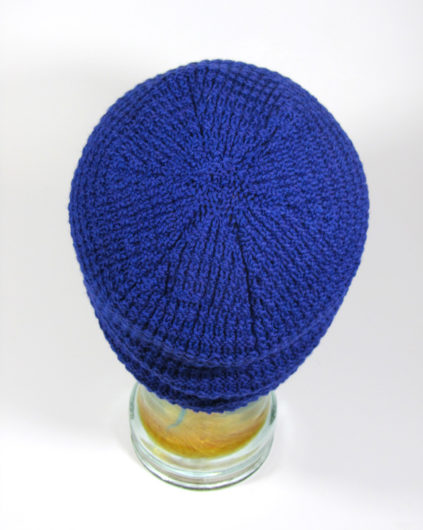 I knit Woodmere in Wollmeise Twin, a bouncy 80% merino, 20% nylon that worked up very nicely in this pattern. Great stitch definition. And that deep saturated color. I might not be able to put this one out for my holiday pick-your-gift baskets. Klim’s KBJ Design patterns are always keepers!

Here’s another hat from Klim that I’ve knit before: Araluen 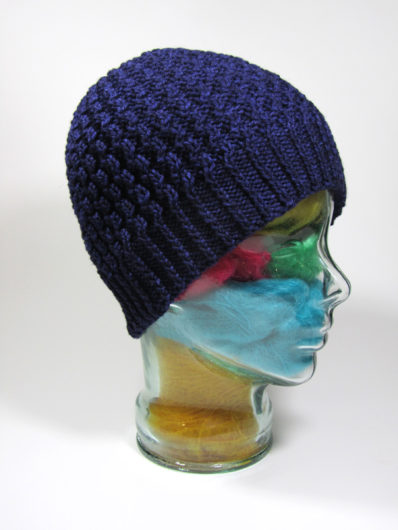 This is knit in one of my personal favorite worsted yarns, Malabrigo Rios. It’s their Purple Mystery colorway. I guess it’s no big mystery why it turned my hands and stitch markers purple while I knit it. That’s not my favorite part of the yarn. And it’s not normal in terms of my experience with Rios. I’ll just need to be watchful if any of the bald men in my circle reach for this one in my holiday gift baskets. I’ll need to steer them to another hat because I’m not sure this one is done bleeding yet. And, yes, another excellent crown decrease. 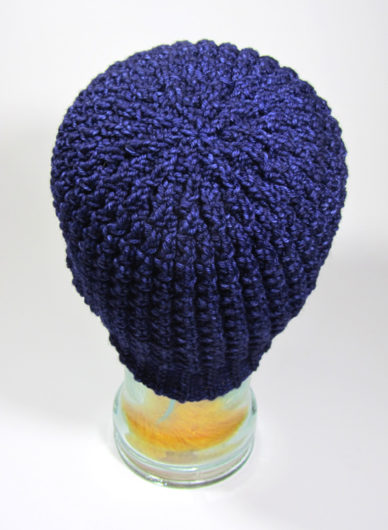 In fact, an extremely well thought out crown.

And now, for something completely different. 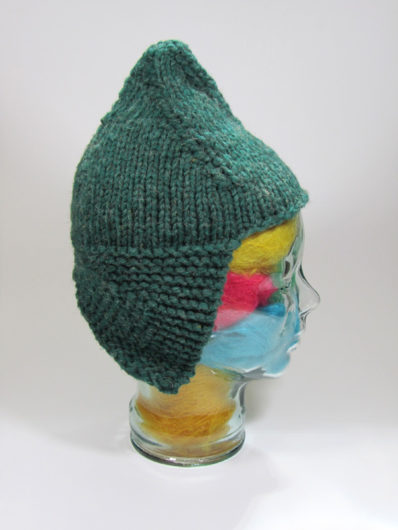 This is Elizabeth Zimmermann’s Maltese Fisherman’s Hat. She is often quoted as saying that the good thing about knitting hats is that some people will put anything on their head. This must be a prime example. 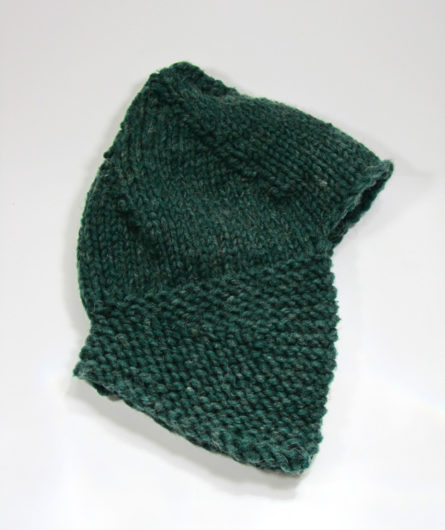 Mine is knit in the Sheepswool Super Bulky that the pattern calls for, available from Schoolhouse Press. It’s actually Bartlettyarns‘ superbulky.

I’m waiting to see if any of my holiday guests reach for this one. Laying flat it looks innocent enough. It isn’t obvious at that point that the hat makes you look like a royal airhead. But there’s nothing warmer than this hat. Maybe ice fisherman should adopt this look. Ice fisherman who actually fish out on the ice, not in a heated ice shanty. Ice fisherman who fish out on the ice alone without any companions and who keep this hat in their pick-up truck and only put it on once no one will see them.

Maltese Fisherman’s Hat is actually a quick fun knit. It puts a knitter in touch with her knitting ancestors. You just have to be brave and wear it with pride.