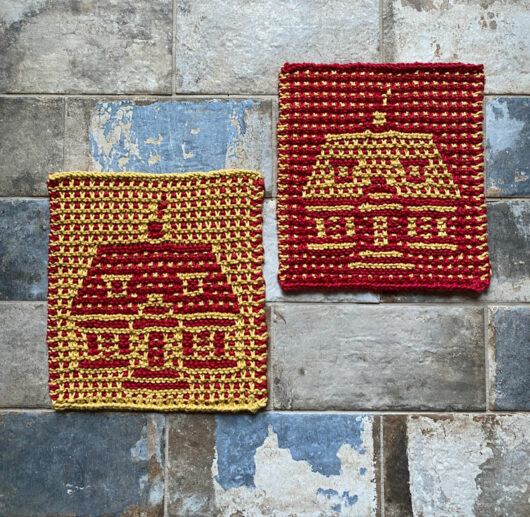 If you visit this blog more often than every few months chances are you’ll see that I frequently knit dishcloths. Yep. I like to knit one of the most often poke-funable knits out there: dishcloths. Maybe second only to toilet paper roll covers. But those are more often crocheted. For me dishcloths are a ton ‘o fun. Quick gratification. And I have people around me who love to receive these things. Plus we use them a lot in our kitchen.

You’re probably wondering about these humble houses. They’re a new pattern from Amy Marie Vold: Cape Cottage. This slip-stitch (mosaic) pattern is available as one pattern download. But it’s also included as one of the six patterns in her New England Village ebook. 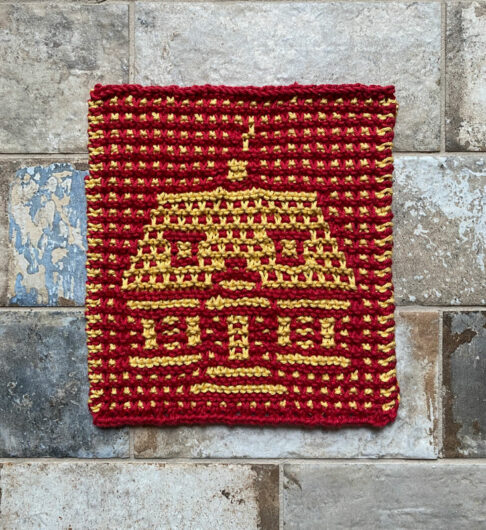 I knit my Cape Cods in Knit Picks Dishie. Dishie isn’t as rustic a yarn as Lily’s Sugar ‘n Cream, the dishcloth yarn that’s many knitters’ first choice. But I like its slightly more refined appearance. 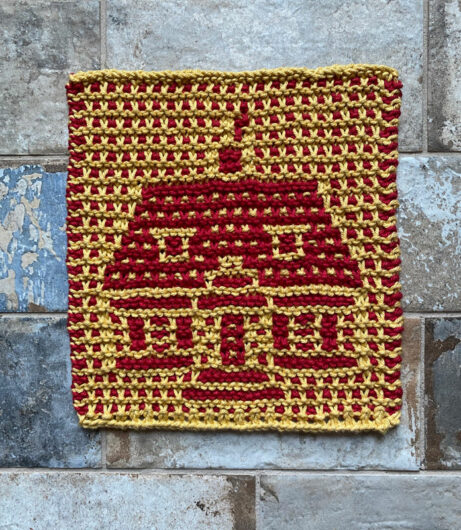 And, just for the fun of it, I often knit these mosaic cloths in pairs, switching out the main and contrasting color.

Speaking of colors, I like to keep a good supply of Dishie colors in my stash. 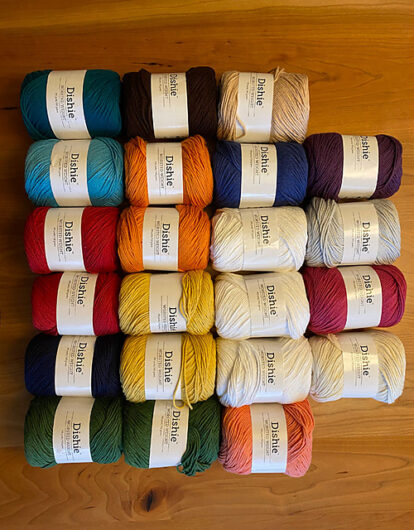 I can admittedly go a tad overboard. I buy only the Dishie sales and make my yarn bucks stretch. It’s good stuff put up in 100 gram balls. 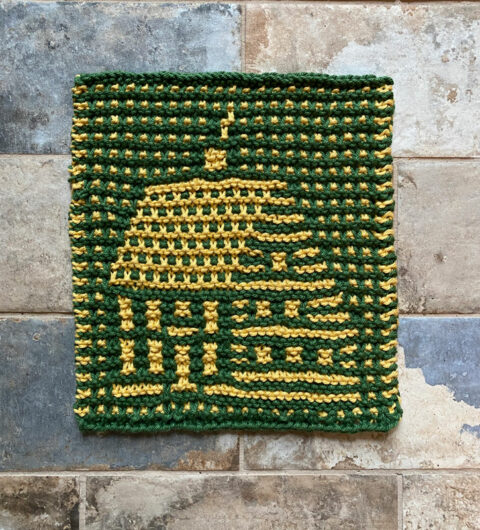 This Jalepeno/Creme Brulee Dishie creation is another in Vold’s New England Village Ebook: Cozy Saltbox. It’s a quick fun knit and you end up with something useful.

What New England village would be complete without an Old School? 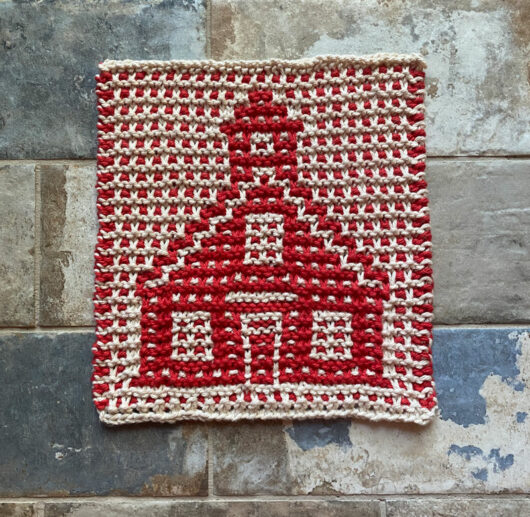 Now, for a spelling rant. I know that extra e’s are often used for…for…for some reason. The name of this pattern is actually “Olde” with a superfluous Middle English “e.” I think it’s supposed to flag something that’s quaint. Comfortably old-fashioned as in Ye Olde Cheese Shoppe. It mostly makes my inner editor curdle though.

Olde School Dishcloth is a wonderful, rhythmic knit. I used Queensland Collection’s Coastal Cotton. My sense of it is it’s a tad beefier than Dishie but a tad less rustic as compared to Sugar ‘n Cream.

I’ve stocked a nice selection of Coastal Cotton too. 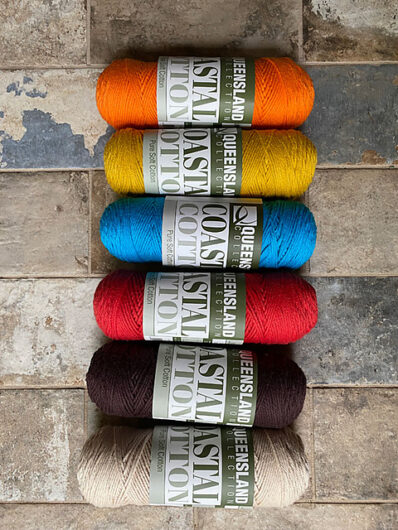 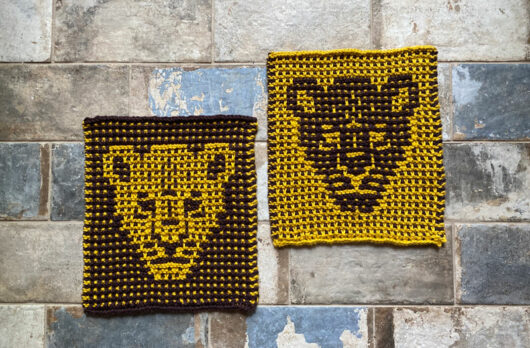 I can’t resist calling this pair my Knittany Lions because their muzzles make them look like a Nittany Lion. Yes, the Penn State team mascot. But also the mountain lion that apparently once lived on Pennsylvania’s Mount Nittany. Anyway, the pattern’s name is Tame the Dishes. That works.

Next up is a set of dishcloths, freebies, designed by Joan Janes. I knit her trio of cloths, Three Dishcloths, in Coastal Cotton. 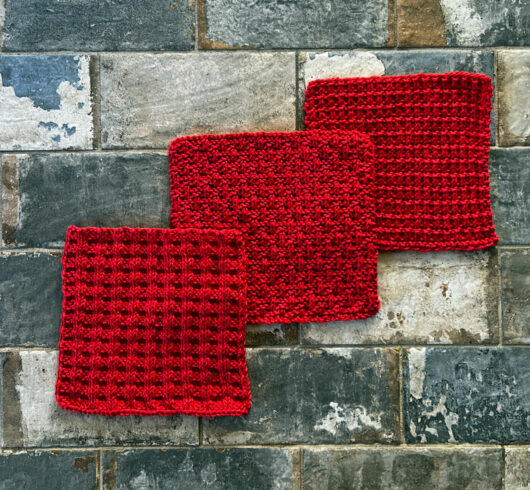 Janes designed the patterns to use only one skein of Sugar ‘n Cream. I prefer less dainty sized cloths than a 30-stitch cast-on will produce, as in the Waffle pattern in the foreground. That pattern works with any multiple of 4, plus 2. So I cast on 42 and ended up with about a 7 inch square, using only 24 grams of yarn. The Garter Basketweave pattern in the middle works with a multiple of 4, plus 3. I cast on 43 and ended up with a cloth about 7.5 inches square. That one took 32 grams of yarn. The Ridge & Rib pattern in the back works with an odd number of stitches. I cast on 37 and 26 grams left me with a square of about 7 inches.

Sometimes a dishcloth knitter wants a basically mindless pattern. Janes’s trio of cloths is great for such times. 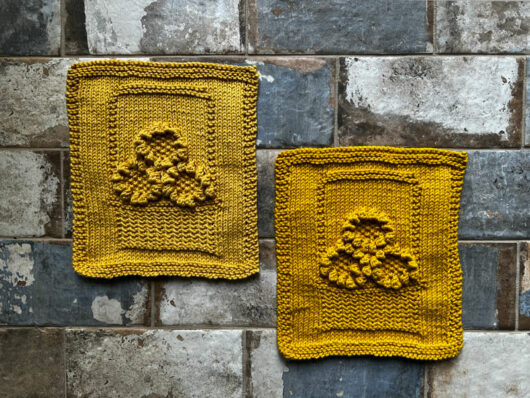 That’s Dishie on the left in Creme Brulee and Coastal Cotton on the right in Goldenrod.

Until working this pattern I’d never worked the vertical wrap stitch that appears throughout the flower basket. It’s easy. On a wrong-side row you work a yarn over, slip one stitch purlwise with yarn in the back, knit one across the length of the basket. You’re creating an extra stitch with each yarn over. Then, in the next row, once you get to the basket, you knit 2 together through the back loops to return to the proper stitch count. Easy peasy.

If you’re bobble allergic this cloth could be the cure because there are quite a few bobbles. Rx: Knit 30 teeny 3-row bobbles and get plenty of rest.