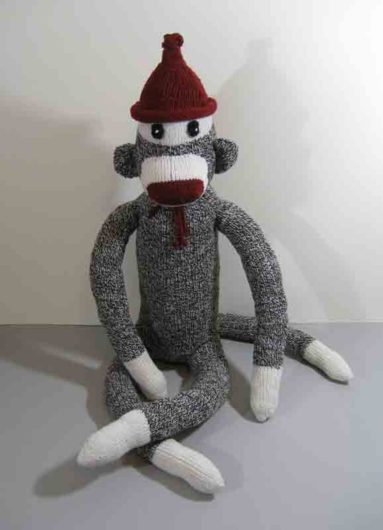 This is my grandson Isaac’s “Big George.” Such a fine fellow. Here’s Big George in profile. 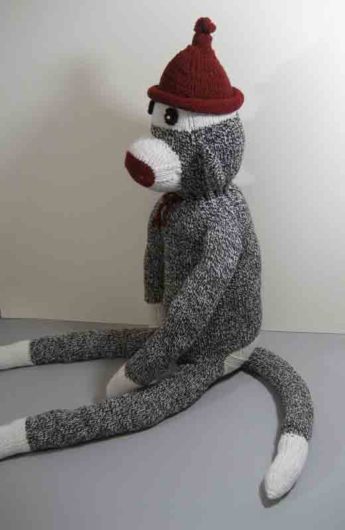 He’s actually “Mr. Ben” by Two Old Bags a/k/a Ann Swanson and Katie Nagorney, worked up in Blackberry Ridge sportweight from a kit that’s still available. I blogged about Mr. Ben’s a/k/a Big George’s creation here, way back in 2010 when Isaac was just a figment of my imagination. At that point my imagination couldn’t imagine why wool and unspun wool stuffing weren’t the most practical tools for the job.

Big George was looking mighty fine. He was even a bit haughty probably because ever since he was gifted he’s been a fixture in Isaac’s bed. 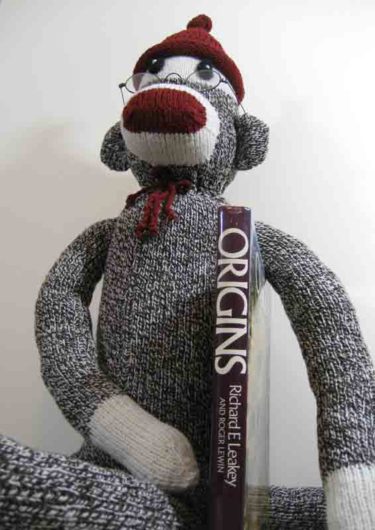 Here’s Roxie nosing Big George very suspiciously while Dan and Isaac read together back when Isaac wasn’t yet his 3-year old current self. 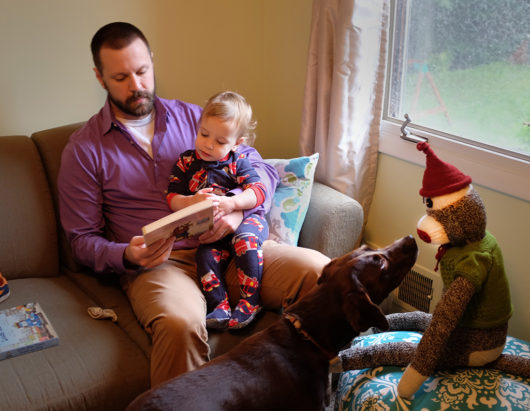 So, about that visit to the ER. Isaac recently had a 4-in-the-morning massive barf attack. (That’s barf, not bark. Roxie’s a sweetie.) The flu didn’t last long and Isaac was better before the day was finished. Big George didn’t fare so well. He was very ripe and disgusting, in a chunky kind of way that previewed his post-washing-machine condition.

Isaac’s mom texting Isaac’s grandmother: “Can Big George be washed in the washing machine?” Reply, “Do it. He’s wool stuffed with unspun wool and will felt, but you have no choice. I was a lunkhead to stuff him with wool. Go ahead and put him the dryer too. He’ll take forever to dry otherwise.”

This is how Big George emerged from the dryer. 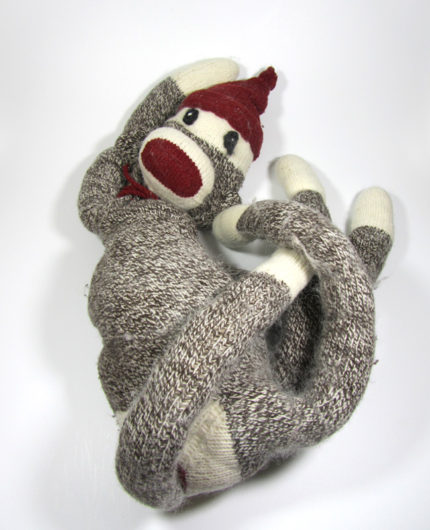 Big George wasn’t actually twisted into the yoga pose you see here, but he was felted, covered with wool lint, and worst of all he had hard lumpy balls of unspun wool all through his innards. He’d totally lost his cuddle-ability.

Isaac to his mom upon seeing Big George as he headed to the washer: “Don’t worry, Big George. You’ll be OK.” When Big George emerged from the dryer, Isaac’s Mom fibbed a tad and told Isaac that Big George was still drying. We had to protect Isaac from the awful truth. Big George was now Lumpy George. He was disfigured by a horrid mess of tumors.

Fortunately I have habitual ways of finishing off the limbs on my critters. I was able to locate the buried ends and unravel back enough to gain entrance to arms, legs, and tail. Then I started the slow process of peeling back Big George’s skin. This was necessary because the wool stuffing felted so much that it was stuck to the non-public side of the skin. After the limb tumors were removed, I approached Big George’s crotch seam with a degree of confidence. About 3 hours later, I emerged with Big George unstuffed, except for his muzzle that for some reason had maintained its integrity and unlumpiness.

This is Big George skinned and somewhat defuzzed. 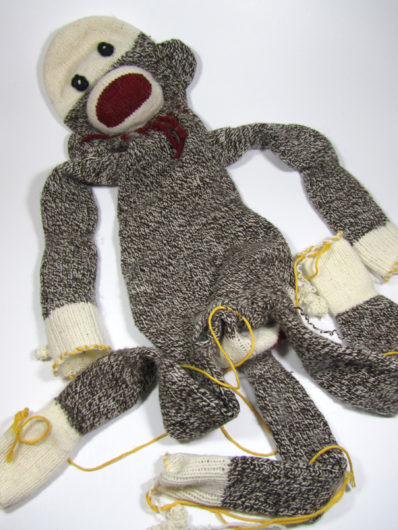 He cut a sorrowful figure.

But one and one-quarter bag of polyfill later Big George was sitting pretty. He was his cuddly self again, with just a few new scars to show for his mishap. 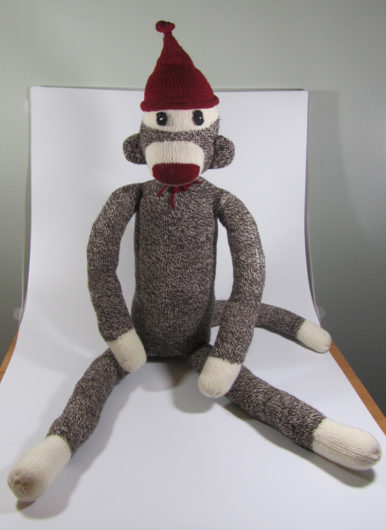 I am feeling rather smug about my knitting ER skills.