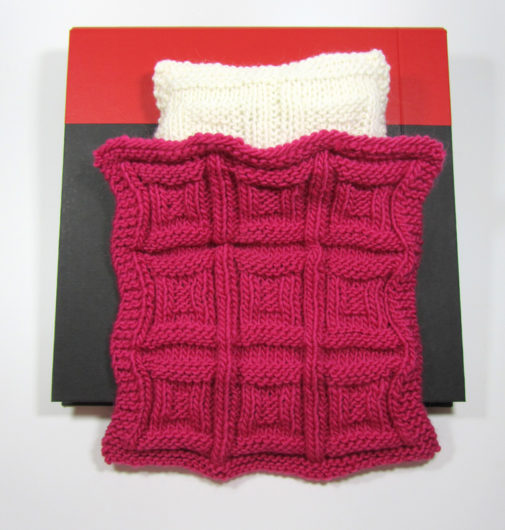 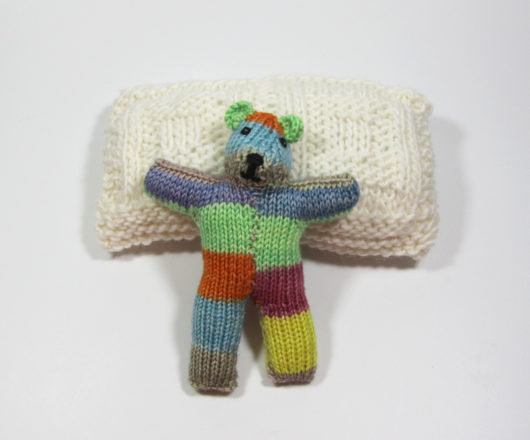 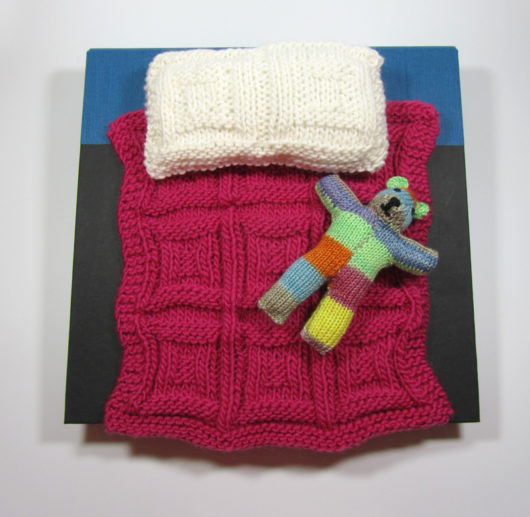 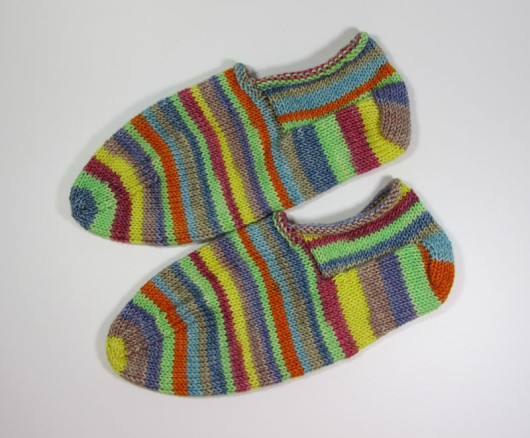 Last week it was Bosnian slippers. This week it’s “Turkish Bedsocks,” the very popular Churchmouse Yarns and Teas Pattern. As their slogan says “Bring a little churchmouse home.” Well, not literally. And the company logo prefers to capitalize Churchmouse. OK. No more wordplay. Turkish Bedsocks is a seriously good pattern. And it’s great fun to knit.

A lot of the versions of Turkish Bedsocks are rather staid. But mine are more to my liking. I look at my feet and smile. And if you met my feet in person you would find that’s quite a feat. 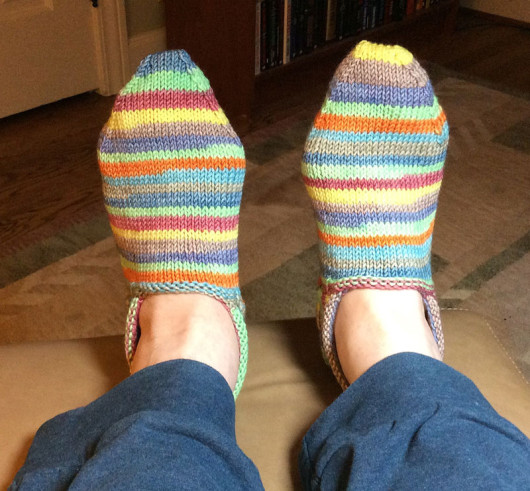 I’d no sooner finished one pair when other lept onto my needles. These are knit in Schachenmayr Merino Extrafine, a DK weight. 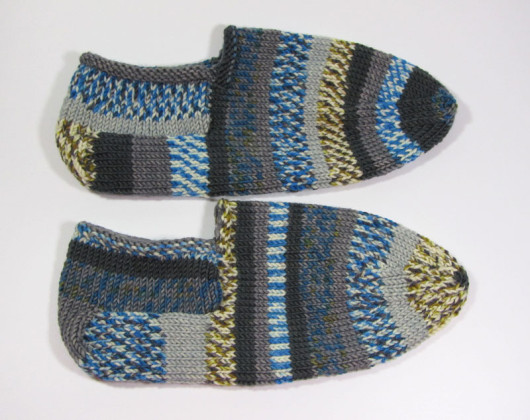 A bit more dignified, but not much.

My only modifications for these two pair were to lengthen the main body of the slipper to 30 rather than 24 rounds. The unusual construction requires mattress-stitching the heel wrap to the heel flap. So you do have a seam. I have no problem with that. There are modifications available on Ravelry project pages if you’d rather do a short row heel. But with my self-patterning yarn, I love the way the various directions of the yarn all collide at the heel end. 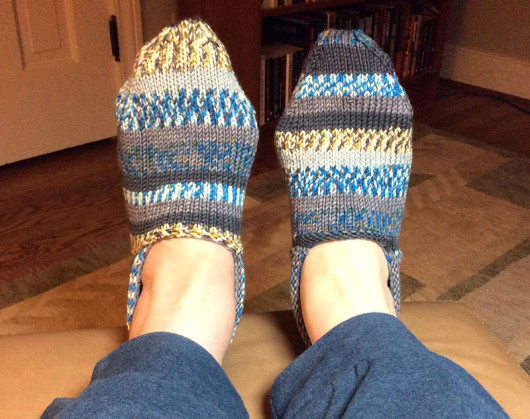 My size 8.5 feet fit into these quite nicely. At the moment they are aimed for my holiday pick-your-gift basket. But I’m thinking I need to keep one pair for me. 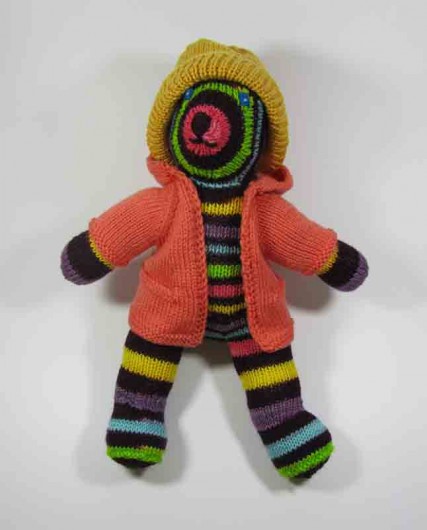 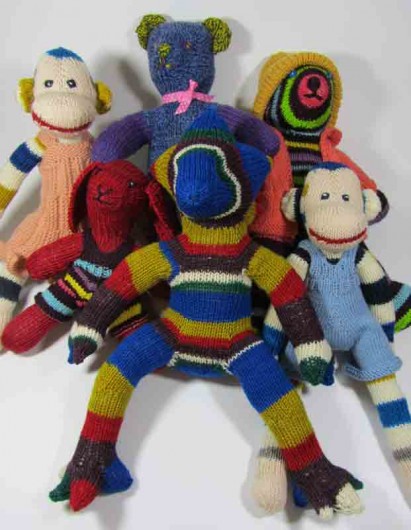 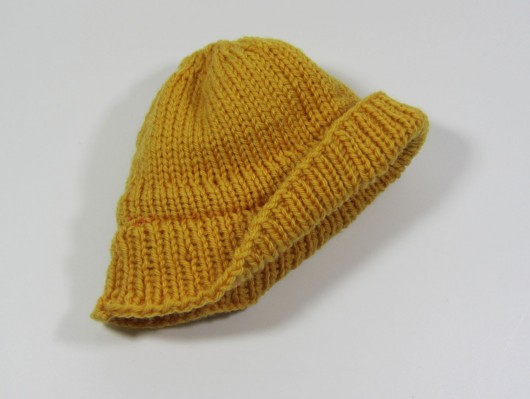 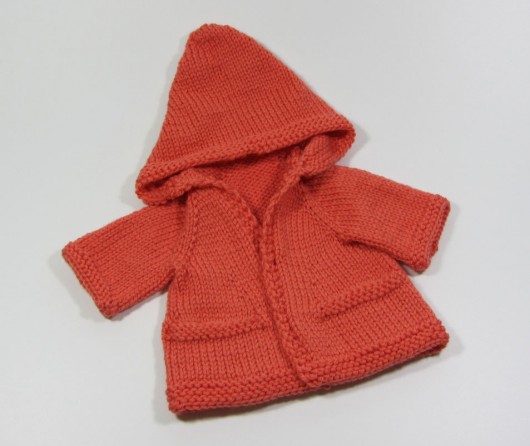 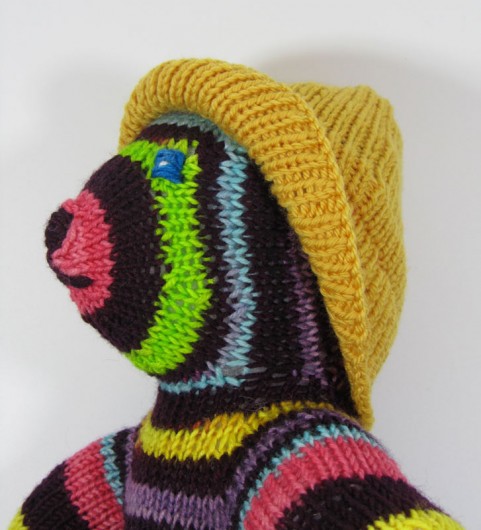 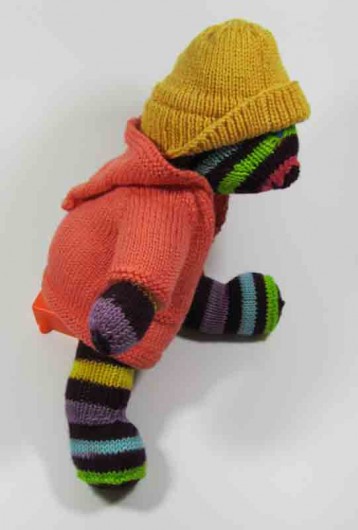 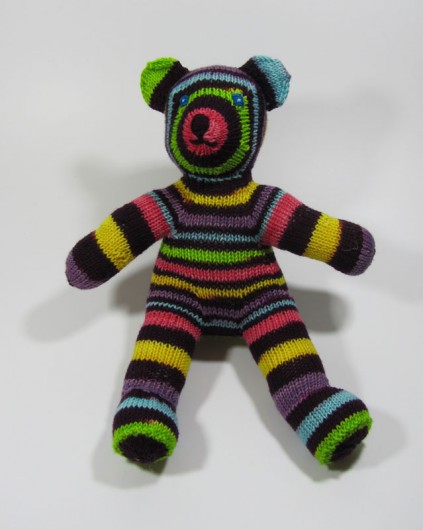 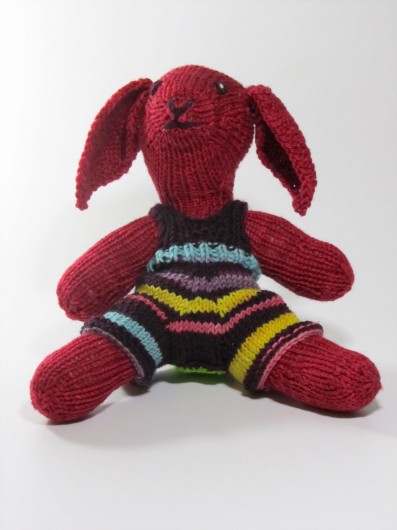 I’ve got an already-identified thing for knitting bunnies. In fact, one of my early bunnies recently surfaced and put in an appearance on the blog. Isaac’s baby bunny was a recent addition to the bunny hutch.

This is Karel, Dutch knit designer Annita Wilschut’s enhancement of the knitted bunny kingdom. Wilschut’s patterns are available on her blog and on Ravelry. My Karel is knit in an extravagant luxury yarn for a critter: Cricket, by Anzula. Cricket is DK weight, 80% merino, 10% cashmere, 10% nylon. Perfect for socks and for small rabbits. Karel’s overalls, which are included in his pattern, are knit in Quaere Fibre self-striping sportweight.

The details on Wilschut’s patterns are wonderful. Not just the obligatory bunny tail hole. (But isn’t it a cute one?) She is a master of short row placement. This gives just the needed shaping for rounded bellies and for butts that let the animals sit upright. And, as with all her patterns, when you finish the knitting there’s no parts to sew together. 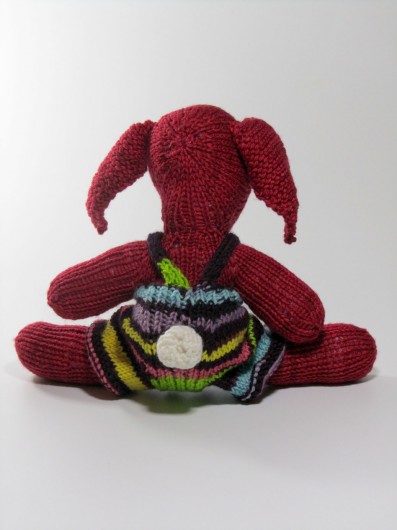 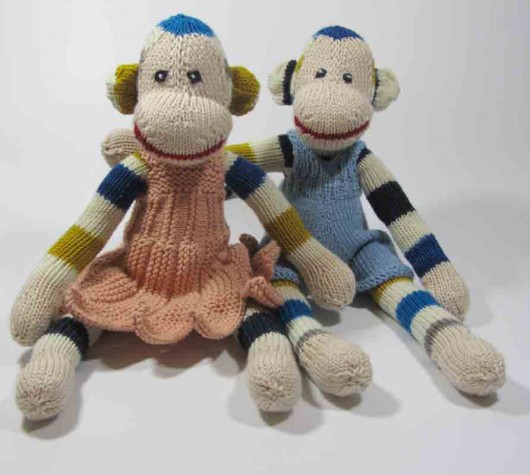 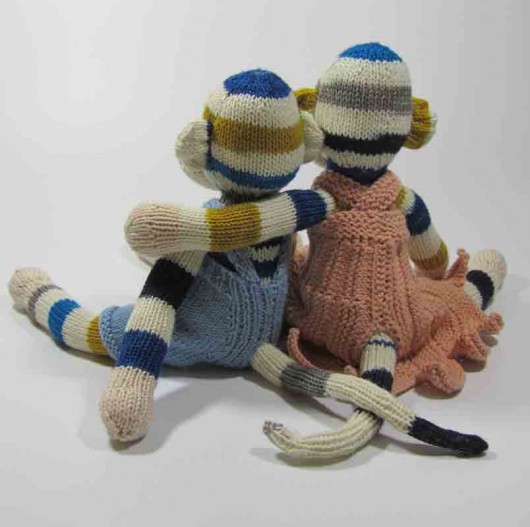 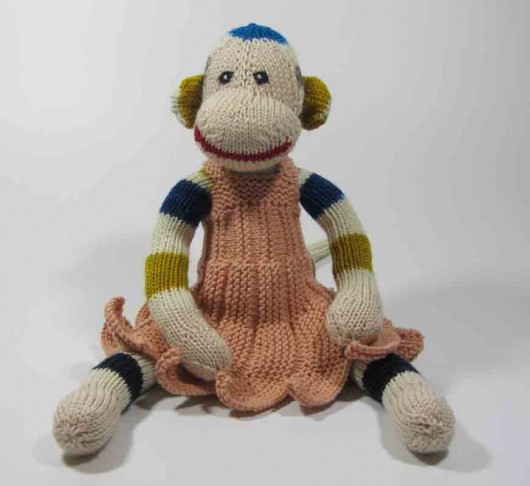 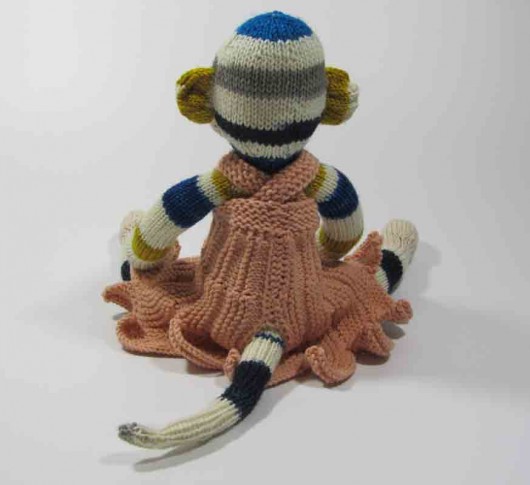 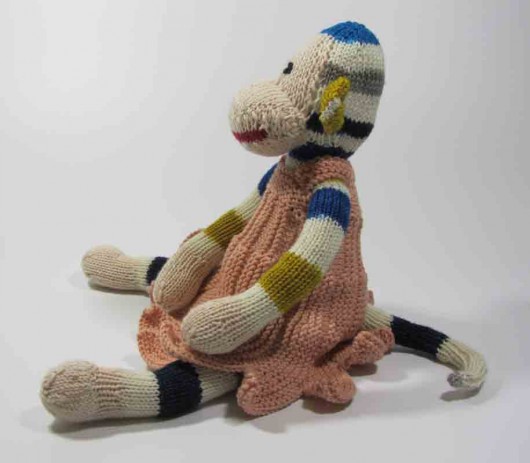 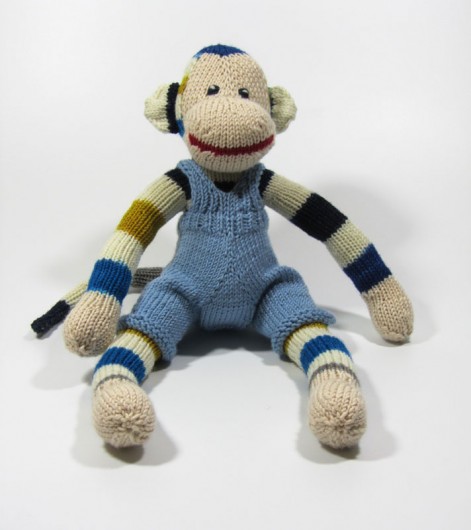 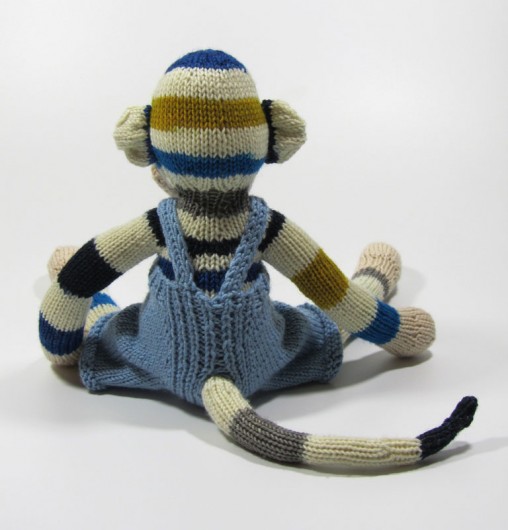 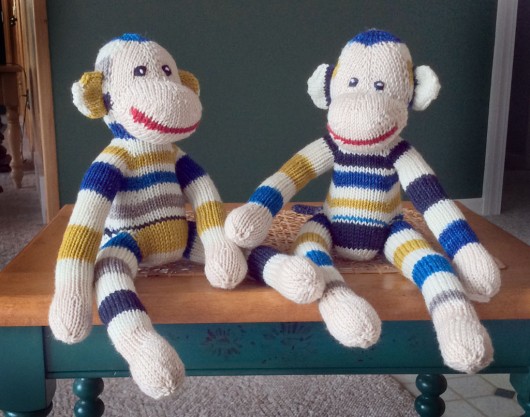