Whereas Marty a/k/a JustMarty is a fellow Michigander who regularly reads my blog and often leaves comments, whereas Marty is an avid and talented knitter, and whereas Marty has asked me to feature green knits on my blog… Wait, this post honoring a loyal follower’s request isn’t going to work because apparently green doesn’t often grace my needles. I find that a few two-color hats is as green as it gets for me lately. I tried, Marty. I tried. 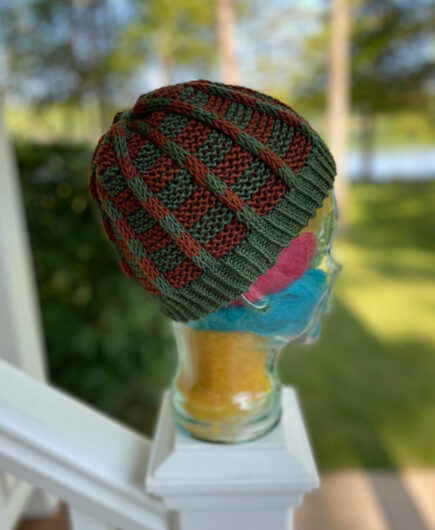 Time to digress. This is the real Higgins Lake. 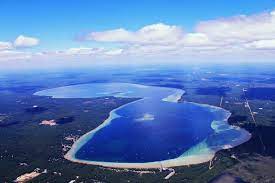 Jodie Brown’s Higgins Lake makes clever use of two colorways and slipped stitches. A knitter won’t have to use more than one color yarn at a time. No Fair Isle here. The single Higgins Lake pattern is available on Ravelry. It’s also included in Nomadic Knits: Issue Seven, Michigan, an ebook available on Ravelry that is also a “real” book available in shops. The book even has a code to add the patterns to your Ravelry library.

Here’s a look at the well-behaved crown decreases in this GREEN and brown hat, 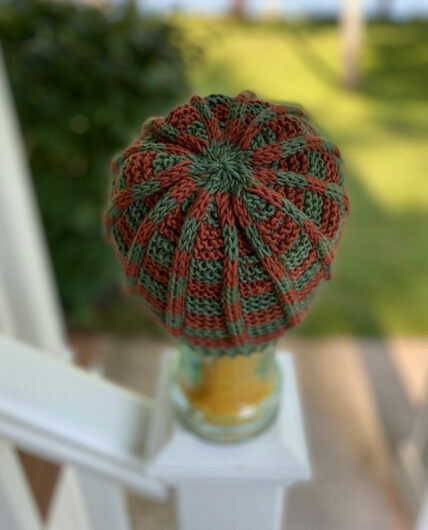 Next up is a Steven West creation, Botanic Hat. I’d had West’s hat in my queue for years. It kept looking to me like more than I felt like tackling. But my partial skeins of Berroco Ultra Wool called out for combining in an interesting hat. And this one qualifies. First, for the spectacular crown decreases. 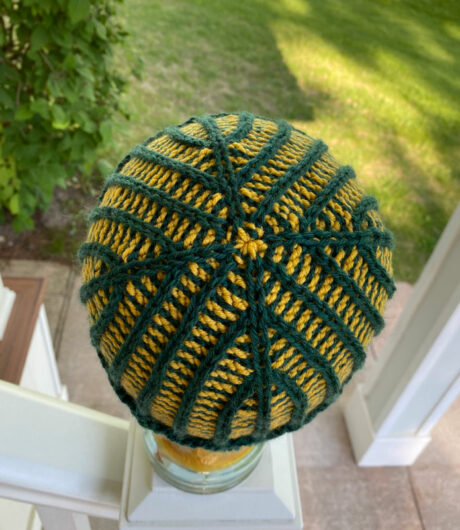 Botanic Hat also relies on slipped stitches to do most of the heavy lifting on design. It’s such an interesting pattern I figure it merits a few extra photos. 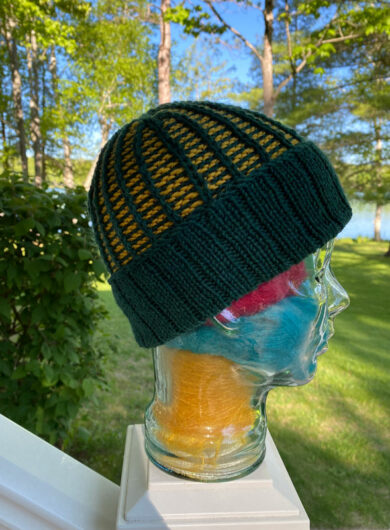 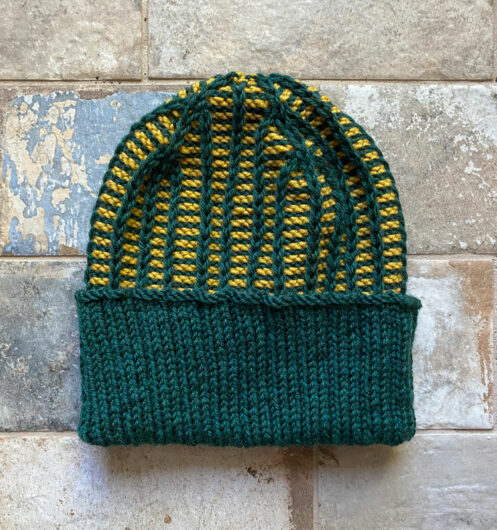 My guess is that someone you gift hats to can’t tell the right side from the wrong side? I won’t name names here. But I can’t be the only knitter so afflicted. Botanic Hat has a surprise. 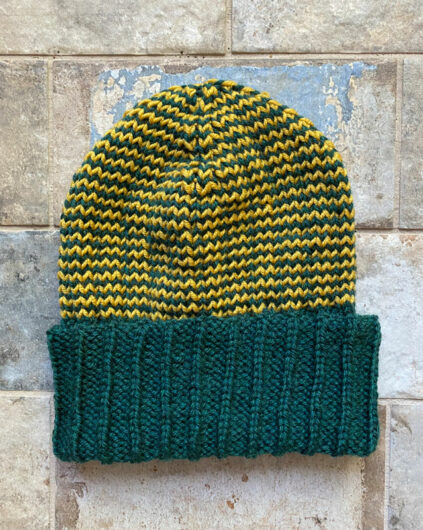 It won’t be an embarrassment to the knitter if its wearer can’t tell right from wrong because it’s basically reversible. 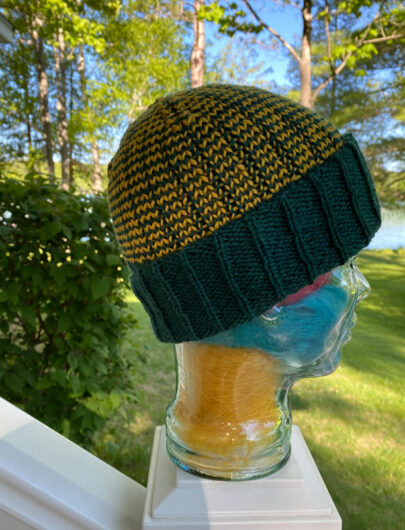 Even the crown decreases look good worn so the world can’t see any of the fancy stuff going on. 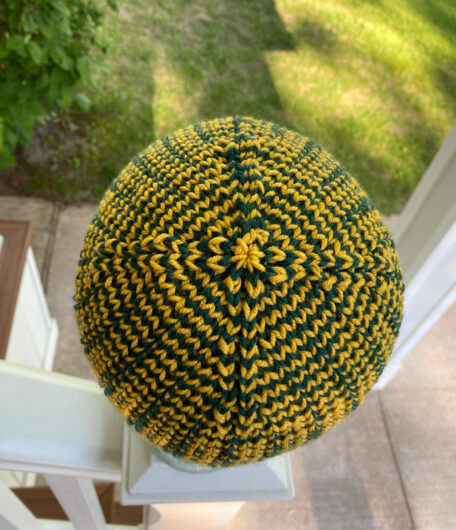 And, with the Botanic Hat, I find I must leave green behind for now.

Next up is another big-name designer’s hat. Turn a Square is Jared Flood’s perennially popular Ravelry freebie. It has nearly 20,000 project pages of knits. That makes it the 13th most popular knit on Ravelry. No mean feat. 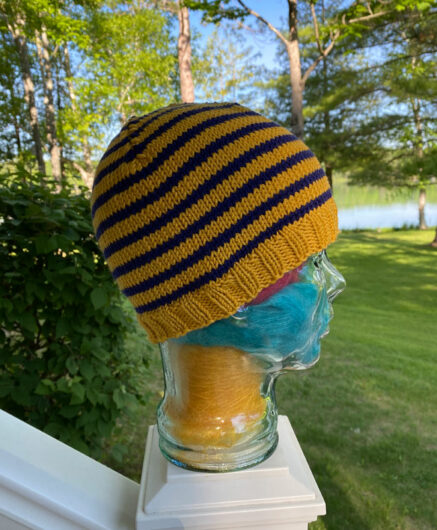 I knit my Turn a Square in Plymouth Yarn Worsted Merino Superwash Solid. I knit hats with this yarn with such frequency I should probably just start abbreviating it. PYWMSS. Jenny gets away with it after all, as in Jenny’s Surprisingly Stretchy Bind Off–JSSBO. Anyway, it’s a good yarn for hats. 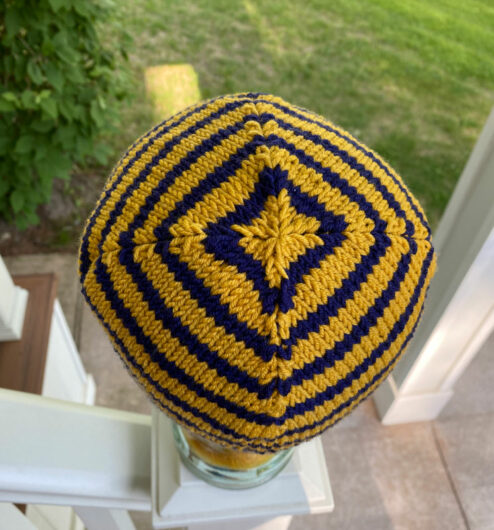 And this is a good hat, with one but. Flood recommends a version of a so-called jogless jog to avoid that little line of jogs where the stripes spiral and overlap at the round change. I tried it. Many have tried it. For some it works (a little) better than it did for me. My jog doesn’t jog it just looks like a jogless mess. 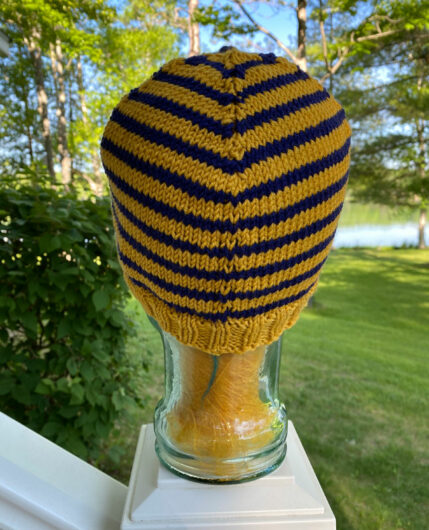 Flood writes that “As you begin Round 2 of the new color, with your right needle tip, pick up the right leg of the stitch just below the first stitch of the round and place it on the left needle. (The stitch you are picking up is the first stitch of the last round worked with the previous color.) Now, knit both the first stitch of the new color and the lifted stitch of the old color together (as for a standard k2tog).” I will admit that there’s no jog with this technique. But obviously this won’t do. I prefer to live with the jog. It’s never bothered me much. I don’t like featuring my failures on the blog. But maybe the public service is worth it. Your mileage may vary. In fact, I’ll be the first to admit that I must have done something wrong. I thought maybe it would block out some. And it did. A wee bit.

So far, none of my two-color hats have been subtle. This last two-color hat is a Blue Sky Fibers’ kit for Jane Veitenheimer’s Quintessential Slouch, with a few modifications. The tan colorway is Blue Sky Skinny, an organic cotton. The natural white textural contrasts are mini hanks of Blue Sky’s Suri Merino, Brushed Suri, Extra and Alpaca Silk. When you complete the hat you’ve worked with what the company sees as their 5 quintessential fibers. It’s an excellent kit, with plenty of yarn to complete even the largest sized hat. 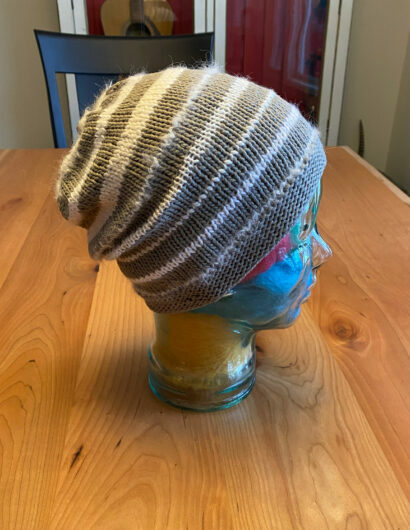 So, confession time. I missed the direction to continue to alternate knit and purl rows for the body of the hat and instead I changed to stockinette. By the time I realized my mistake I decided I liked it better than the garter stitch alternative. Stockinette created a less beefy hat. And it dramatically affected the row gauge. I eliminated about 15 rounds and it remains an extravagant slouch.

The crown decreases called for in the pattern are incredibly abrupt: from 80 stitches to 5 stitches in 4 rounds. I interspersed knit rounds and feel that worked out better. 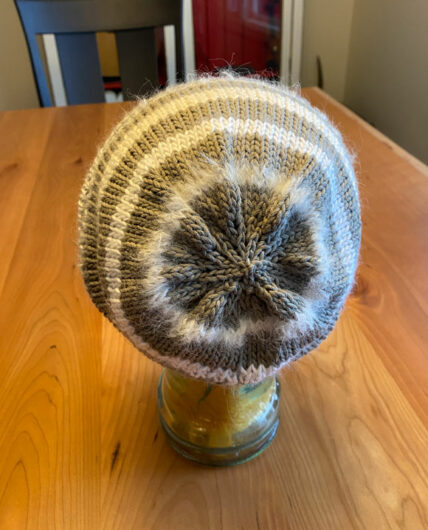 So, not much green. But these two-color hats were great fun to knit. 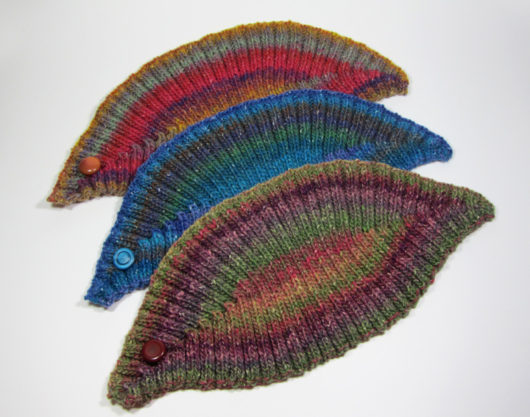 Calorimetry times three, in my favorite yarn for this project, Plymouth Yarns Boku. One 99 yard skein, about 3 hours of time (maybe), one button, and you have an excellent gift for any size female head.

If you haven’t yet given Kathryn Schoendorf’s free Knitty pattern a try, it’s available through Ravelry. I recommend that you knit one. Tonight. 18,526 Ravelers have knit it and posted it on their project pages. Calorimetry is currently the 7th most-knit pattern on Ravelry. And it’s the only one that’s a head thing.

Here’s a closer look at these three. 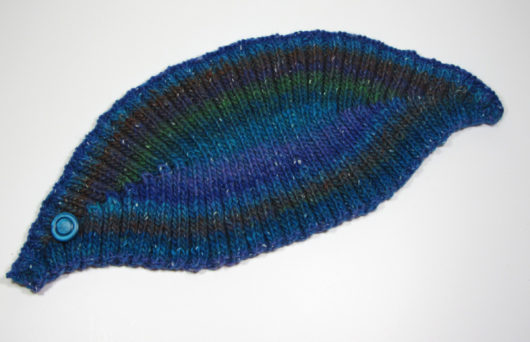 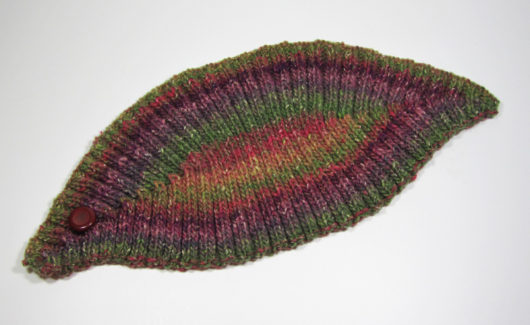 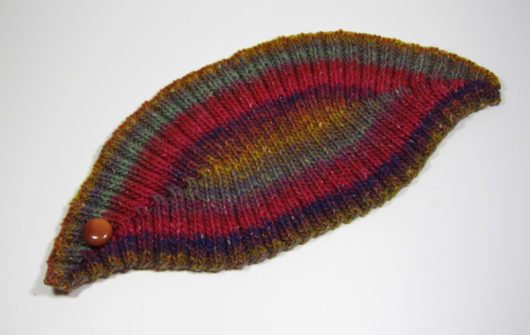 Speaking of knitting multiples, Windschief, by Steven West is another frequent knit for me. Here’s my latest batch of three. This trio of Windschiefs is knit in Berroco Comfort. It’s a tad splitty. But for the wool adverse, and for some reason more of the men in my life are of the “it’s itchy” type, Comfort is an excellent choice. Here, in gray. 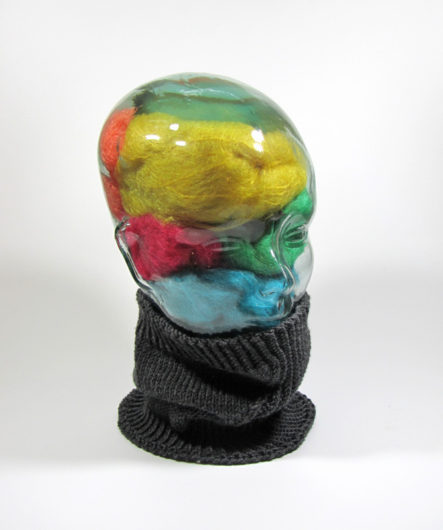 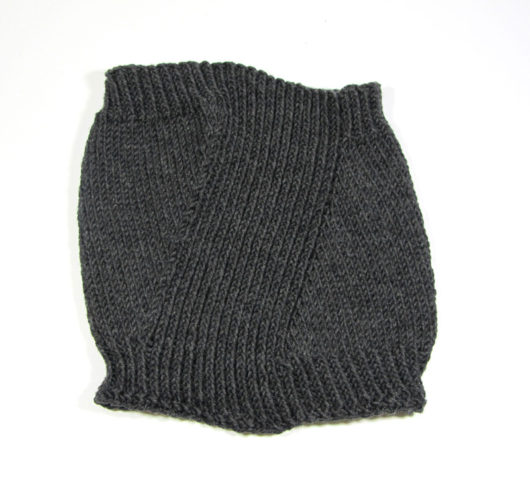 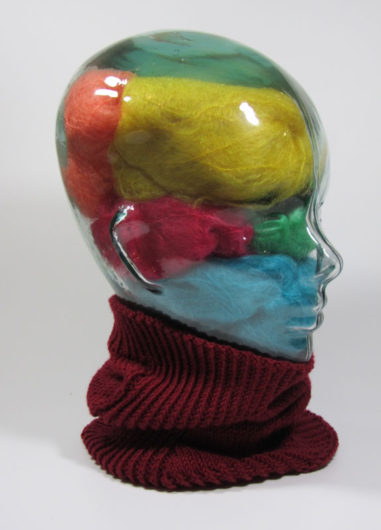 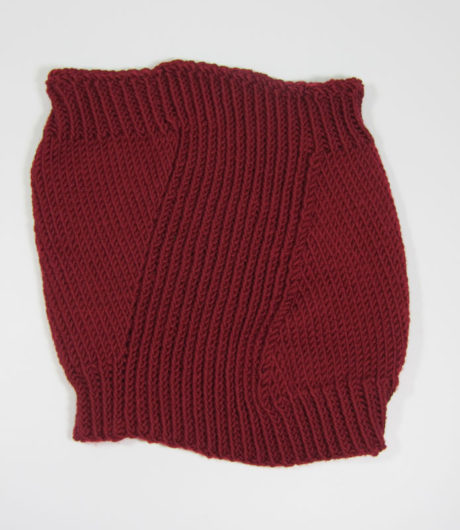 And in a very, very, dull brown. 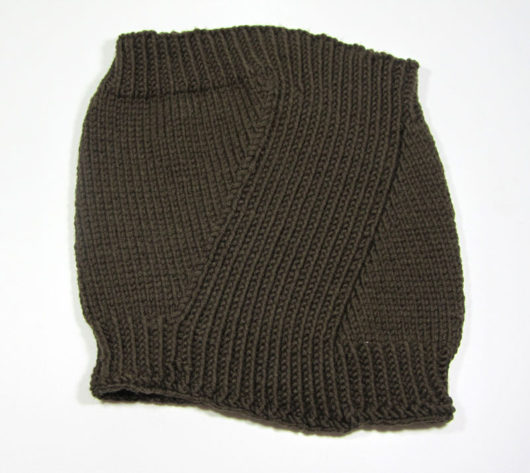 They-who-must-not-be-named tussled a bit over the dull brown. Who’d of thunk it? Actually, it’s a warm brown. Just a nice warm, dull brown.

My six dollar investment in this pattern has given back excellent value. These three, plus these five more (with a Windschief hat), and one more. The pattern includes a hat pattern that starts from the same cowl base and just works upward through crown decreases. Steven West when he was still designing dull. His designs aren’t dull anymore. But I think this one is still one of his best. 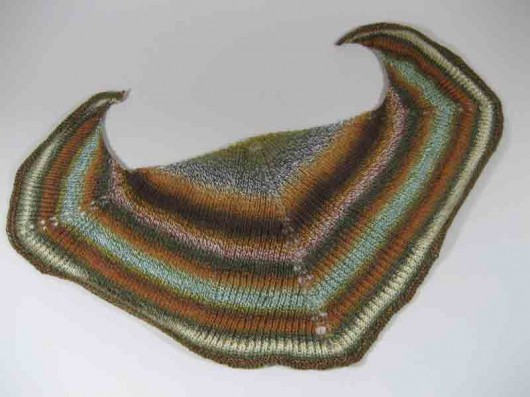 This is Steven West’s Herbivore. Lots of knitters have great success with the pattern. It is clearly written. My yarn was Crazy Zauberball by Schoppel-Woole.  Great yarn. Good pattern. It just didn’t work for me. It didn’t hold my interest and so I ended up with a few errant yarn overs, which didn’t bother me enough to try to do something about them. On the yarn over front, this is not actually as messy as this photo makes it look. Herbivore’s side “wings” are curling and won’t block out. In my hands, an unsatisfying knit. 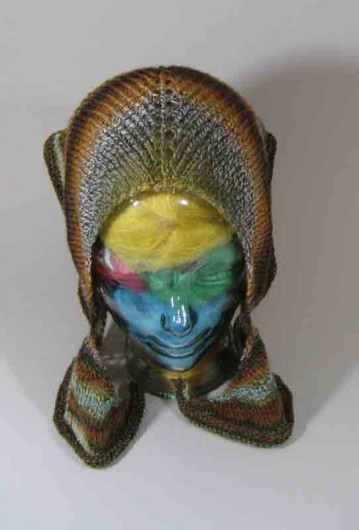 But small humans don’t tend to have high tolerance for having their heads wrapped in wool tied under their sensitive chinny chin chins.

And then, it came to me. Poodie. Poodie is a knitted sock monkey and a voracious reader. But he’s kind of impoverished when it comes to clothing. He has a hat, which he’s not wearing here because it’s 99 degrees today. And he has a little bow tie. But he has no other clothes. So, meet Poodie modeling Herbie, his shawlette. Poodie obviously has good taste in knitwear and isn’t afraid to make a fashion statement. 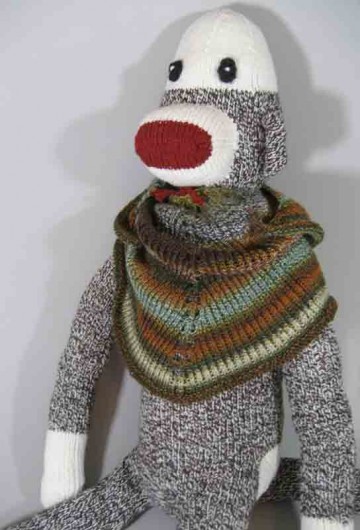 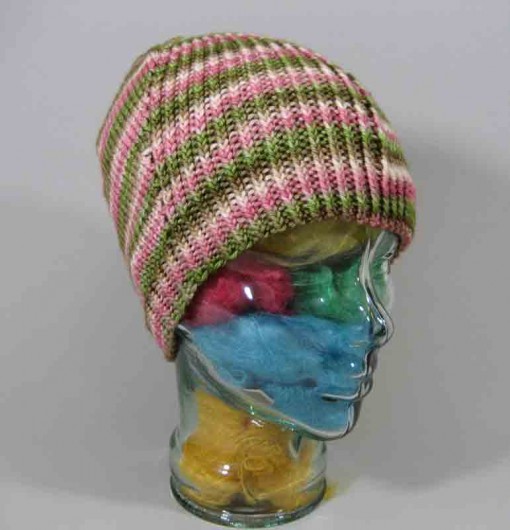 I’m doing the knitting cozy hats when it’s 92 degrees and humid again. It’s actually rather sensible. Knitting a hat is a very compact project.  Perfect for warm weather knitting, except that you’ll have to wait months to wear it or gift it. In fact, it’s so hot that you won’t even want to try it on. That’s when yarn-for-brains glass heads come in handy.

This is another Steven West design: Windschief. It can be knitted as a hat, as here (worked up in a local hand-dyed washable wool).  Or leave off the top shaping, return to 1-1 twisted rib, and you have a nifty cowl. As here. Quick. Easy. And the twisted rib carried through the body of the hat (and cowl) adds just enough to keep the knitting interesting. 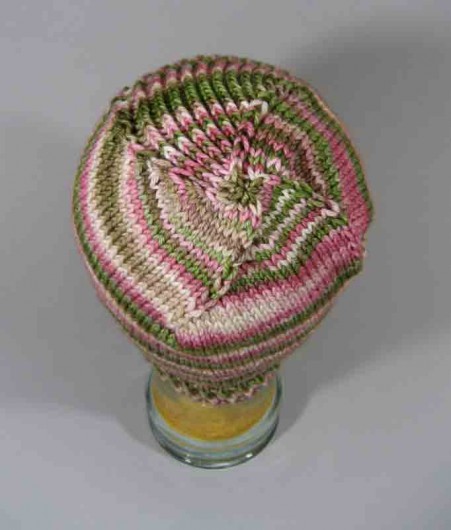 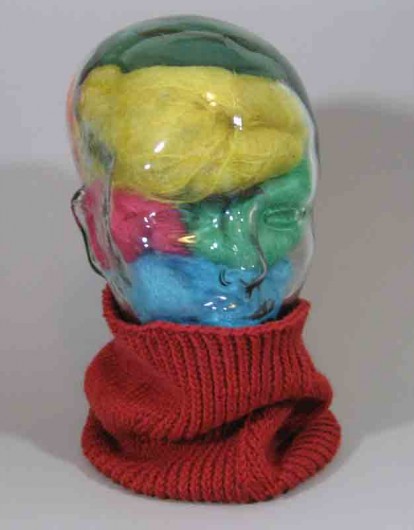 I’m still dabbling around with warm cozy stuff even though it’s been 94 and humid this week in Michigan. This cowl is the brainchild of the talented young designer, Steven West.  Knitted without its top closed, it’s a cowl. Soon I will knit the hat version, which simply leaves the top ribbing off and continues the twisted rib section through the decreases in the crown of the hat. Cleverly conceived.

A simple pattern that relies on twisted rib, gently moving diagonally. This is a wonderful quick knit, worked here in Cascade 220 Heather in the Christmas colorway. Wool cowls and Christmas, a suggestion of cool during an oppressively hot week. 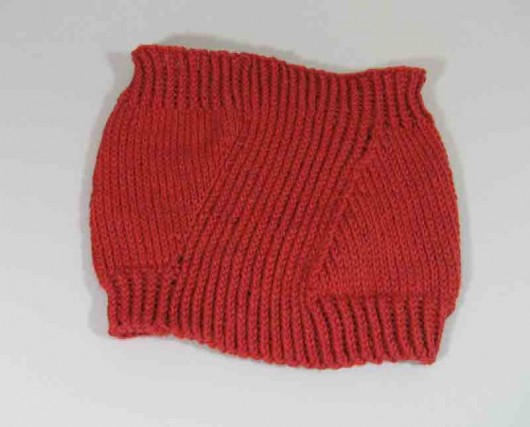